Savings Not Meant For Mere Mortals 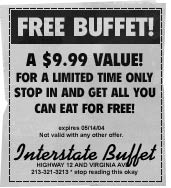 It was as though imaginary flames were burning the flesh off my hands as I grasped the sacred parchment of savings. The frail sheet of paper singed my gentle flesh, echoing a sense of profound astonishment through my nerves. What divine comeuppance resulted in me coming into possession of such a holy manuscript? Surely this had to be some sort of mirage, an illusionary mistake not unlike the product of an unwanted pregnancy between two holograms. In truth, I no more held this coupon than the coupon held me, dangling me over a swimming pool filled with chlorine-scented mystery and untold potential for excitement.

My eyes danced about the surface of the coupon, examining each word for hidden meaning, hidden catches, and hidden insight into life itself. Had the ancients imagined that their primitive cuneiforms would one day evolve into dollar signs? There was so much to behold on such a tiny surface. The small number of words meant nothing, for what they did not say could fill a million coupon-related stories yet written. These were not weak words like "moose" or "patio," but strong words like "free" and "buffet." These were words that titillated and evoked passion, stirring noble ambitions in even the most simple of men. Who could not identify that "free" was the basis of "freedom," or that a buffet was in many ways a form of gambling? However, because of this coupon, it would be no gamble for me. The coupon, in essence, represented an economic cheat code imbuing the holder with unfair advantages.

The buffet was a gamble for those who had to pay money. The steep price connected with many buffets inspires people to eat the most food for their money. From a stern economic standpoint, consumers really only benefit if they get more than their money's worth. This puts the proprietor at risk if the consumers eat through the food and begin chomping the profits away. Thus the buffet could be an unrivaled economic miracle, or it could be a tremendous waste of money. Because of this coupon, though, I transcended the role of mere consumer. I was a winner no matter what happened, for I would spare no coin and yet still gain full rewards. In some ways, I was now a god ready and eager to pass judgment on a kingdom of food, descending upon it with the intensity of an attack helicopter made out of really sharp angel bones.

As I held the coupon close to my nose, absorbing the warm paper aroma basked in the sweat of my hands, I could almost smell the future. Never mind the fact that it smelt like me on a hot day, my nose was looking beyond that with its tiny olfactory eyes. This piece of paper was like a key, and I would put it in the lock of the buffet, perhaps twisting it, thus opening a door to free food. But how much of this free food could I stomach? To make this free opportunity twice as free, it would depend on my capacity to consume without mercy for my body or for the buffet owner's well being. This was no easy task, for the buffet represented a grueling struggle between finite stomach linings and infinite portions. Only fools rush into buffets unprepared for the physical consequences. It takes discipline and a strong work ethic to truly master the buffet, and I was lacking in both. I would need to take time to prepare myself mentally and physically if I was to make the most of this situation.

Having recently eaten, I could not make use of the coupon for sometime. I decided I would stop eating, and wait until my stomach told me when it was ready.

Day One: I started my preparations by securing the coupon in a safe place. I had it framed and I hung it on a wall, where it could serve as a sort of motivational poster. Whenever my will weakened, I could stare at those words and find comfort and strength. It was my Bible now.

Day Two: I woke up from a nightmare. In my dream razor wire and armed guards surrounded the buffet. Before making use of it, I was forced to step on a scale and be weighed. A craven man marked down my weight on a clipboard and then ordered me to proceed to the table. It was filled with fresh human organs, still dripping with blood. But it was a buffet regardless, so I filled my plate as full as possible. Then, after eating all I could, I was weighed again. The craven man laughed, and then the guards subtracted the difference from me with a hacksaw and put it back on the table. The rest of the day was tense and stressful.

Day Three: Under the false assumption that it was Confucius who coined the phrase, "you may take as much as you want, but please eat all you take," I needlessly studied a great deal of his philosophy and writings. I gained no greater understanding of the relationship between man and buffet, but endeavored to be more virtuous and avoid the local concubines. I also had a fantasy about eating a live cow while snorkeling in a sea of gravy.

Day Four: I refused to eat a sandwich on the grounds that it would fill me up before the buffet. Because liquids were still required, I shredded the sandwich into tiny pieces and mixed them into my Kool-Aid. Mayonnaise and Blastin' Berry Cherry shared an uneasy alliance. I stared at the coupon as I suppressed my gag reflexes and repeated a silent mantra.

Day Five: The moment had arrived. I heard a rumbling roar reverberating through my innards like a lawn mower inside an elephant. From the stygian depths of my stomach cried the call of the buffet. I could no longer hold out, for now was the hour of eating.

I arrived at the restaurant ready to devour them out of business. I was so hungry that I felt I could probably eat my way through at least half a midget, though I hoped that was not what was on the menu. Days of heartache and suffering were now primed to pay off in the form of unlimited free food. I had hallowed out enough space inside me to truly frighten the coupon industry out of business, and cripple a restaurant at the same time. 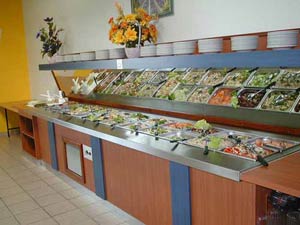 I approached the register gingerly, knowing full well I was like a giant to that pitiful human cashier. She was young, pretending to be full of life, but confined behind a counter and stifled by the harrowing work of the industry. Her uniform was caked with assorted greases and stains, a sponge in a world not kind to sponges.

"Hi," I said in a voice riddled with contempt. "I'm here for the buffet!"

"Well, I guess you came to the right place then," she said in a dry voice. What life she was pretending to be full of quickly died an agonizing death right before my eyes.

"No, I meant I'm here for the entire buffet. I have this coupon. Please ask everyone else to leave."

"I'm afraid I can't do that," said the young cashier, reaching out to accept my coupon.

I held on tightly, almost refusing to let go. For a brief moment we both embraced the coupon, and I felt love for the first time. I loved that coupon, and did not want to lose it. But alas, my heart was broken when that cold cask of a woman yanked it away from my clenched digits.

"Ummm," she muttered. "This coupon expired five days ago. Sorry, you'll have to pay full price."

"What?" I asked in shocked disarray. "Where you not taught how to read numbers properly?" I added.

"Look right there. That date was five days ago. This coupon is expired, sir"

"You're a liar," I shouted! "You smudged the date with your filthy fingers! I demand repartitions!"

"Look," she said. "I'm going to get my manager. You should leave before he gets here."

"Wait! Maybe we can work out a deal!"

"No, I meant a deal. Like charity! Your charity!"

"Fine! Fine, you vile boxcar virago, I'll leave. But I'll be damned if I'm not leaving without my coupon!"

"But it's expired!" she contested, as if that was a new revelation.

"Give me my coupon before I get your manager!"

She handed me back the coupon, all the while looking at me with a look of intense disgust. I snatched the dead paper from out of her hands while compressing my face in such a way that would shatter a monocle, had I one to wear.

I quickly left, but stopped outside to stare at the coupon. This poor coupon, once so full of life and promise, was now dead in my hands. How did it happen? How was I so naïve as to forsake that it, like all creatures, only lived so long? It died while I was too wrapped up in the dream of a better tomorrow to notice the present. With its passing went five days of training, a substantial emotional investment, and my faith in Confucius. There was only one thing left to do now. I was hungry, and I had but one thing to eat, one thing left to fill the void, the hollow cavity inside me. I swallowed the coupon. We shared five good days together, and while our love was not meant to last, it would always be a part of me. Every coupon has a story, and this coupon's story was one I would never forget.