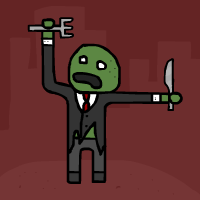 I was going to write in this earlier, but we had to do more body heat exercises and Brad had to smell the back of my neck for a few extra hours to make sure I wasn't changing. I'm glad he knows this stuff! Last night he brought me some Speedos which I guess are okay. He said that there was too much body heat back in this room and my work clothes were absorbing it all. Hey, he's the guy that went to college for science, not me. Now all I have to do is keep lifting these weights so I get stronger. This protein stuff tastes like ass but I'm not allowed to drink anything else. Brad said he has a special surprise for me so I'm going to do my reps and wait for him to come back.

3:03 PM
Brad brought me back a case of baby oil and told me to rub it all over myself. When I questioned him, he inspected me a long time for zombie sores. He said, "I guess I can tell you. This is so the zombies won't be able to grab onto you. Also, zombies hate the alluring smell." He squirted a palmful into his hand and slapped it on my chest and then smelled it. "You see! What sort of zombie would go near that?!" I said I didn't know. It's probably better if I don't.

8:08 PM
Oh boy, things are not looking good. Brad came back from another one of his runs (he is good so he does them a lot) with his clothes ripped and panic in his eyes. "Quick," he said, "get the rest of these clothes off of me!" I started unbuttoning his shirt and he slapped me. "Rip them off!" So I did. "Tony, I've got zombie sores, real bad!" He showed me and I thought it was weird how they looked just like purple magic marker. Then he told me that I was going to get rid of them. I was afraid because I didn't know the doctor stuff like Brad, but he told me it was real easy. I'm not going to write here how exactly how I did that just in case my little cousins Alfredo and Dario read this, so I'll say it was just like how they get the venom out of snakebites in movies. 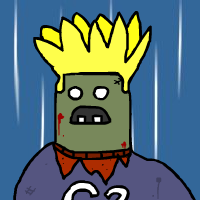 So after I got rid of the zombie sores, Brad had one of my cigarettes and relaxed because he said the nicotine is a healing agent. He said I should have one, too, just so I wouldn't get any zombie sores in my mouth. We had some wine coolers he brought back from outside that he said he found under an old Beanie Baby display. Right then I thought of my ma's Beanie Baby collection. Were they okay? Was my ma okay? If not, would they have her Beanie Babies in Heaven? Brad couldn't answer this question and instead had me listen to his heartbeat for an hour to make sure he was okay. After I was pretty sure he was okay, he opened up the package that he risked his life for. It was some weird leather outfit with chains and zippers and stuff like that. "That's your zombie battle suit! You're going to need it if we want to get out of here in the next few days!" Brad said he made it. I asked him why it didn't have a crotch and he said that was so my zombie sores could be cleaned off fast if I got infected.

I tried it on and it looked alright, I guess. I put the funny little red ball that was part of my suit in my mouth. Brad said that's so if I turn into a zombie I won't bite people. He thinks of everything!

11:43 PM
Maybe you're wondering why I'm up now. It was just a few hours ago that me and Brad were in our sleeping corner when he whispered, "Tony, I have to talk to you." He even bit my ear a little so I would pay attention to him. I couldn't believe what he said next, "We have to have sex with each other." I freaked out. He told me that if we didn't, our animal instincts would get the best of us and we would kill each other! Brad started screaming and clawing at his face. I wasn't a homosexual, but I didn't want to die. So I said, "Go ahead." Situations like this make you do real crazy things. And you know what? It could have been worse. I had more pain down there the morning after I ate those expired jars of fruit cocktail. And I don' t think God minds because there's probably a bunch of dudes like us doing this to survive. But we're leaving in the next few days so I bet I won't have to do that again I hope.

12:30 PM
I couldn't sleep so I started talking to Brad. I wanted to know if we were leaving soon because I wasn't too hot on redoing what happened a few hours ago. He laughed. "A few days?! We'd be lucky if we got out of here in a few weeks! Do you know how many zombies are out there?!" I did not know, but it made me uncomfortable. I felt like I was going to go crazy. But I didn't tell Brad because he would probably try to have sex with me again.

9:30 AM
World, this may be the last writing of Tony Romano. Brad left early because I guess he didn't need much body heat and he said he had something to pick up from one of the aisles. I started working on my glutes like he said. I heard the same helicopter and gunfire noises that I've been hearing since this whole disaster started - but this time they meant something. Brad came back with a gunshot wound to the shoulder! "They... learned how to use guns. Tony, there's no hope! Kill yourself!" These were the last words of Brad before he passed out from being shot. I'll tell you that I thought of ending it right there. I had that broken wine cooler bottle an inch away from my neck until I screamed "NO!"

Tony Romano isn't going to go down like that. I have my zombie battle suit for a reason. And just because I can't save Brad doesn't mean I won't be remembered as a hero.