It's All Happening at the Zoo

This past weekend saw fit to provide me with some sunny skies and warm weather. Seizing the opportunity, I immediately jumped inside the nearest vehicle and drove to the zoo with reckless abandon. I hoped to see some exotic animals of varying sorts that would spark my imagination and reaffirm my love of nature at its savage and wild best. It's always a treat to see the myriad creatures that roam the planet, especially the ones that aren't indigenous to the area you live in. The zoo would have them all, no doubt about it.

After paying the somewhat hefty admission fee, I happy proceeded through the gates ready to be awestruck by nature's spirited skullduggery. I was, however, immediately taken aback by some gaudy and gruesome bird roaming freely about. A gaggle of children and parents flanked the bird at its every turn, and a nearby zookeeper kept an eye on things, probably waiting for the kids to clear out so he could terminate the shameful creature.

The bird's colored feathers resembled the makeup of a downtrodden transvestite prostitute. I imagined that the bird must have pissed off the zookeepers, leading them to paint it up like a wretched whore and parade it out in front of everyone as a last walk of shame before the end. Out of respect for the zookeeper I did not spit on the creature, though I should have. I later found out from a placard that it was called a peacock, and that it was naturally that hideous. I moved on with a rotten taste in my mouth.

The gorilla area was like walking into the waiting room of a methadone clinic. It was filled to the brim with listless and forlorn beasts, each one lost in some personal hell even more grim than the actual hell they lived in. They wallowed in their own feces and urine, and did not care in the least. They embraced it, knowing that they deserved no better in life. They festered in a self-hatred so intense that it sapped them of all mobility and motivation. For them death was a waiting game, and the only game they knew. Until it came, these disgusting creatures would exist as bacteria in the very toilet they overfilled. I shook my head and moved on.

Next up was a small pond populated by a hippopotamus and his modest harem. Each of these fat, glorified pigs was a lumbering example of languidness. Sometimes, one of the near formless blobs would let out some tepid bellow, as if to cry out, "I exist, though I neither deserve nor want to." I must confess they demonstrated one cunning adaptation. Their fatness seemed to disinherit them of anything resembling a neck. The noose of natural selection was at a loss in the presence of the hippopotamus. I looked around the ground for any loose rocks I might hurl at the beasts to show my disapproval. Finding none, I left and hoped that they would be swallowed whole by their own morbid corpulence.

I found myself in the land of the giraffes, a world that beckons you to look up and be amazed. I looked up, and what I saw was a joke so horrifyingly bad that it made me wonder if comedy was dead forever. How did such a violently offensive creature ever come to be? Was it the sadistic action of a depraved God, or did the endlessly turning gears of evolution accidentally spit this defective unit on the factory floor? I almost didn't want to know, and I was so disgusted that I vomited in my mouth. I longed to run free and wild with a chainsaw, cutting these toweringly deformed horses down to size. 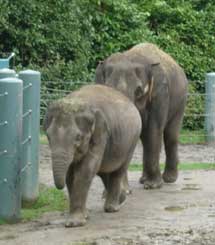 The much acclaimed elephant was anything but epic. The only thing monumental about these beasts was the apathy for life they exhibited. They stood still, scarcely moving except to periodically probe the ground to make certain it hadn't escaped out from under them. The elephant is a beast built by a committee of bipolar fools. The giant murderous tusks juxtaposed with floppy ears? Those mammoth bone crushing feet and that silly snorkel nose? I stared one of the pachyderms directly in the eye and it spoke to me. I saw its shame for existing and its anger at the cruel forces of nature that saw fit to engineer it as such. I longed to take out a gun and put a bullet in the beast's minuscule brain. Give it a voice and I have no doubt that it would have begged me to do so.

At this point I was hungry, so I stopped by the concession stand to get a hot dog and a soda. Both were quite pleasing. The hot dog was a delicious all beef delight, and filled my heart with joy. It had been a good day so far, and the hot dog made it a hundred times better, as hot dogs invariably do. The soda did a fantastic job quenching my thirst and giving me that extra boost of energy I needed to maintain my fevered level of excitement. I marveled at what a nice day it was, with sunny skies and warm air complimented by brief cool winds.

After the brief recharge, I approached the jaguar cage. It was a lair of obsessive compulsive disorder. I watched through the glass, expecting the ferocious beast to demonstrate some of the dynamic traits that inspired automakers to name a car after it. Instead, it paced back and forth relentlessly, as if hoping to wear the ground out. I banged on the glass hoping to startle some sense into the creature, to let it know it still had people to entertain. Instead it remained focused on pacing. Had there been a zookeeper around, I would have asked him to electrocute the dumb beast or do something - anything - to help me get my money's worth. I had no choice but to call the jaguar a loss and move on.

The fat little otter swam through the waters, deprived of any worthwhile destination or purpose. Its life was an agonizing journey in circles, of endless reputation punctuated by occasional bites of salmon cake. But it knew, surely it knew, of the horrible façade that was all around? Surely it knew that it lacked function, that it had no place in the greater scheme of things? Surely it knew that it was only mankind's cruel and misplaced pity, or perhaps malevolence, that delayed inevitable extinction?

"Is it even edible?" I asked the zookeeper cursed with otter guard duty, while pointing at her useless prisoner.

"Those salmon cakes are quite edible, and the otters love them."

"I meant the otter. I assume it must have at least one reason for existing."

She glared at me, most likely realizing and externalizing her own unsavory role in helping prolong the miserable otter's existence. "Otters aren't typically eaten, and none of the animals at this zoo are ever eaten."

I nodded, not wanting to frustrate her any further, and partly because I agreed that none of these animals would be the least bit appetizing. Not like that hot dog earlier.

I progressed to the adjacent penguin house, ready to give the bird kingdom another shot after that disastrous peacock left a squalid taste in my mouth. A few penguins swam in circles, like the useless otter, while one lone Humboldt penguin stood atop a rock frozen in terror. It looked as though it had just learned the harrowing truth: that life is a putrescent scam that robs you of everything and leaves only death, an endless void of nothing, in its wake. The cold air the penguin was used to could scarcely match the frigid psychological temperatures of absolute truth. Only death can pacify the frenzied stings of such emotional frostbite. I felt no joy knowing the perils of the journey the penguin had started on. I immediately left to continue a journey of my own.

The reptile house was my last and final stop. Reptiles and amphibians, the miniature dinosaurs of our modern world, called this dark den their home. It was a land of scales and claws, tails and teeth, and who knows what else. It was sure to be a treat!

I was struck by the stare of a Komodo dragon, which seemed first to be fixed squarely on me. However, I moved slightly to the left, and noted that the creature did not move in the slightest. Instead it stared at some far off point, perhaps the point of an imaginary knife, in futile hope that it would stab the life out of him. Looking at its surroundings, a small chamber of sand, rocks, and a tiny pan of water, and I could see that it was not happy. The profound misery in its eyes seemed to suggest a more severe depression, one hardwired into its very existence. The Komodo dragon found the mere act of living so debilitating that it had given up on the idea of movement. I wondered if perhaps the zoo had tried to pull a fast one and put a stuffed lizard in the cage to con us naïve big city folk.

The zoo seemed to be home to only two types of creatures: those that move endlessly back and forth or in circles, and those that do not move at all. Somehow I imagined nature being more diverse. Upon realizing this I decided that I had seen everything nature had to offer and could leave fulfilled. I took one last look at the Komodo dragon, sighed, and headed toward the exit.

As I opened the exit door, I noticed a small pen labeled "turtle." Captivated by the simplistic intrigue of this archaic word, my hopes were instantly elevated to heights well out of the reach of even the giraffe. As I peered into the pen, I observed what appeared at first to be an ordinary but intricately patterned rock resting in a small pool of inch deep water. I wondered if this "turtle" was out sick, or in fact nearly invisible due to some marvelous camouflage ability. Instead, I was surprised, in fact nearly driven to a heart attack, by the sight of a rock suddenly growing limbs and a head and coming to life. The majestic turtle had fooled me by taking on the guise of a rock! Marveled, I applauded the creature and indeed cheered him on. He slowly moved several inches, a breathtaking and swift sight by any standard. He moved and then remained stationary, disappearing back into his rocky abode. With a little encouragement, he would unpack himself and move even further. This was an awesome creature, one that both moved and remained stationary, never giving you too much of either.

After two hours of turtle watching, I was asked to leave. I immediately proceeded to the gift shop and bought a miniature turtle replica, a turtle fanny pack, and a turtle shirt. As usual, the zoo didn't disappoint!