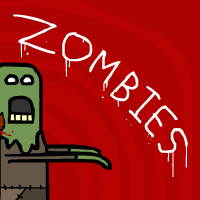 My name is Anthony Romano, one of two survivors left in McGraw's Discount Irregulars Superstore, and maybe the world. It's three hours after the big zombie outbreak. I leave this journal behind as a record for whatever future people find it. You may notice that the first 30 pages of this notebook have killer designs for flame decals I was going to put on my car. I also leave these to the people of the future, if they still have Camaros. You can also put them on tanks and other things I guess.

I want to say how this all happened so that people will know. It was 11:00 PM, and me and Brad were working the night shift again. I was stacking boxes of giant novelty sunglasses, just like any Thursday night. My buddy Brad was looking pretty sour so I put on a pair of the sunglasses and yelled at him real funny, "Look at me! I'm an asshole!" Brad didn't even smile. "Sorry Tony, but things just don't feel right tonight." He didn't look too happy so I told him I was going to the break room to have a smoke. So I went back there and I barely lit my Kool before Brad came back looking like hell. He stood in front of the break room door after locking it. "I don't know how to tell you this Tony, but... zombies."

At first I thought he was shitting me. Brad was a real joker, like the time he made all of those secret videos of me going to the bathroom at work - what a prick! But he looked serious. I said, "Whatever, Brad." "You don't believe me?! I'll show you what's happening!" He ran out of the room and I didn't know why. Then I heard a bunch of screaming and I got real scared. Brad came back into the room with a severed arm and was waving it around. He threw it down on the table. "Do you believe this?!" It was all that was left of Domingo, who was scrubbing the floors the last time I seen him. I knew it was his arm because it had the tattoo of the Virgin Mary 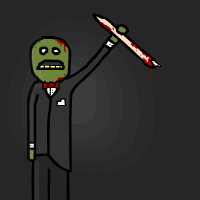 holding Baby Jesus holding a joint. I felt like I was going to shit my pants.

"Zombies, Tony! Just like in that movie we saw!" I didn't like to think of that time I went to the movies with Brad because of the reason why I don't go to the movies with Brad anymore. But I knew what he was talking about and I got more scared. "Relax, Tony. The best thing we can do is sleep now to conserve our strength until morning. Now let's curl up together in this corner." I wasn't about to get weird with Brad, but he said it was to conserve body heat and he was in college once. So I'm writing this now and after I take my clothes off I'm going to go conserve body heat with Brad like he asked. Jesus, please help us survive this.

11:43 AM
I was up for a while but it took a few hours for Brad to let go of me. So when he got enough body heat (he must have way less then me) we decided to talk about what we were going to do. Then I remembered the little black and white TV we keep back here. "Brad, why don't we turn on the TV to see what's happening outside?!" He got real mad and threw the TV against the wall, which broke it. I was going to get mad, but he told me that now is the worst time to watch TV because after stuff like this the government sends out brainwashing signals to get you to kill yourself so they don't have to save you.

Brad is so smart at stuff like this! Our plan now is easy. Brad is going to clean out the store of zombies, while I stay in here and train to get strong enough to push my way through all the outside zombies (while carrying Brad) to safety. I got worried because the bathroom isn't back here, but he said I could just do it in his hands and he'd carry it outside. What a guy! 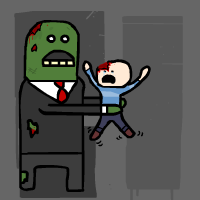 So I did just that and Brad didn't seem to mind at all. In fact, he seemed happy to help out a guy in a situation like this. So after getting a few handfuls he left and said he would bring back supplies. My only job was to take off my shirt and start doing push-ups. Brad said I had better do at least 200, so that's what I'm starting on now.

4:39 PM
I did all my push-ups and started listening for Brad to get back. I didn't hear any zombies, but I did hear a lot of sirens and a guy on a megaphone outside. I'm glad I'm in here! So Brad comes back all sweaty and wheeling a dolly full of stuff. He dropped it off and there were a few things of protein powder and some of our irregular free weights. "I want you to start lifting these weights and don't you stop until I say!" Brad looked freaked out and something was wrong. "Brad," I told him, "Where'd you get this protein stuff from? We don't carry it here." His eyes got real big and he came over to me and put his hands down my pants. Right down my pants! My first instinct was to hit him but then he said that he was just checking to see if I had any zombie sores down there because that's the only place where they show up. I guess I am going to have to get used to stuff like this now that there are zombies around. Something tells me that having Brad wrapped around me is going to be a whole lot easier tonight!