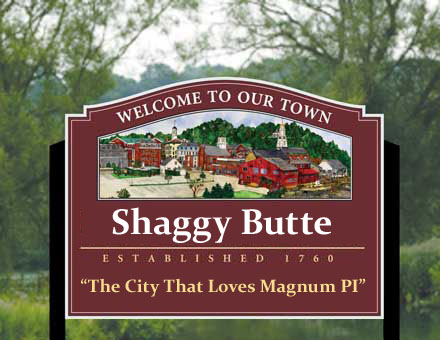 1980: Desperate to escape the terrible publicity of the previous five years, the Shaggy Butte chamber of commerce decided to stage a stunt: they'd flatter the producers of Magnum P.I. by changing their motto, hopefully attracting a visit by Tom Selleck (and maybe even convincing him to film a few episodes in town). The new motto made national headlines: "RAPETOWN LOVES SELLECK"; "MAGNUM BELOVED BY U.S. RAPE CAPITAL." The show's producers sent the town a cease and desist letter, and a new motto was commissioned. 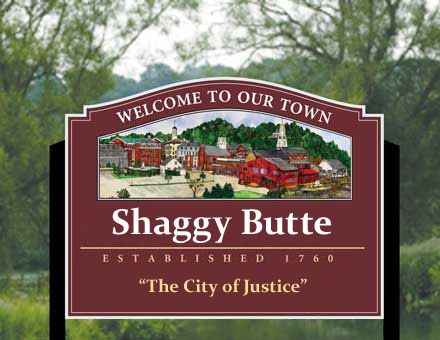 1981: This motto was adopted to honor the successful conviction of Terry Huffman, the notorious Shaggy Butte Raper-Strangler who terrorized locals six years earlier with his unprecedented rape spree. Huffman eluded justice for years, as Shaggy Butte detectives kept accidentally destroying all the forensic rape evidence against him; some of it was dropped down the station well, some was chewed up by K9 officers and their dogs, and some was mistakenly eaten when it was left beside a blind detective's sandwich. Huffman's spree was finally put to an end when police made a deal that he could violate seven more victims with impunity in exchange for a lighter sentence for his prior crimes. 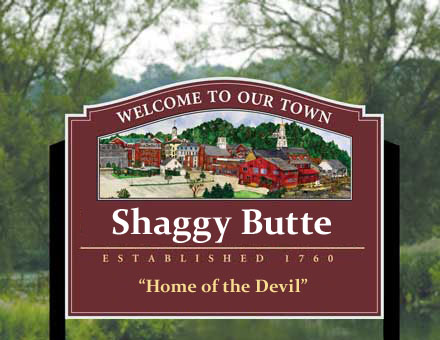 1985: After The Shaggy Butte Raper-Strangler was released on appeal, the prior motto no longer seemed appropriate. Shaggy Butte decided to adopt the least controversial motto they could think of: "Home of the Devils," a reference to their perennially winless high school sports team. Unfortunately, the sign maker left an "S" off the end, and the timing couldn't have been worse: the next month, Shaggy Butte happened to be at the epicenter of the nationwide "satanic ritual abuse" hysteria-- the proprietor of a local preschool had been accused by psychologist-goaded toddlers of a suite of implausible offenses, including sacrificing babies on an altar made of Stretch Armstrongs, interfering with children in a nuclear submarine, and letting Chester Cheetah touch a youngster's no-no area. The trial and the motto made national headlines, humiliating the city. 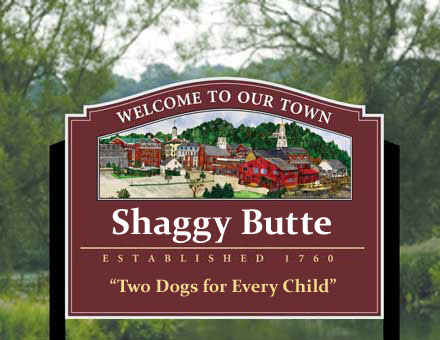 1987: After the nerve-wracking satanic fiasco, the city council knew it needed a more whimsical motto. As luck would have it, a new demographic report showed that there were twice as many dogs in Shaggy Butte as people under 18, so a new sign was immediately erected. There was a problem, though: confused residents took the motto as a promise, and showed up to city hall with their children, demanding two free family dogs. The council, up for reelection, felt trapped; they decided to honor the requests for the remainder of the year, nearly bankrupting the city.