Creating Sound Effects For The Shape of Water Has Broken Me

I am writing to you from St. Benedict's Psychiatric Recovery Center to inform you that I can no longer work with you or anyone else. While you bore witness to the decline in my condition, I do not think it registered with you due to how consumed you were with your 'artistic vision'. Allow me to explain my current state. 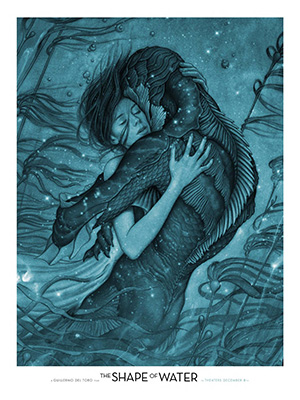 As a foley artist I am used to creating vivid and descriptive sound effects to help bring movies to life. The soft thud and jingling of a cowboy's spurs. The mild moan of wind outside as our heroine explores an eerie mansion. The cacophonic shriek of mortar fire and the crunch of crumpling bone during the storming of a beach head. All of these are the product of my passion for wringing acoustic perfection from innocuous and esoteric sources. My life's work is to make the mundane noise of daily life into a tapestry of subtle cinematic genius. Needless to say when you invited me to work with you on The Shape of Water - a project you described as both genre-breaking and compelling in its complexity - I was thrilled. I did not even read the script. I assumed you would be creating the next Planet Earth or perhaps a tribute to Jacques Cousteau. My familiarity with your work was minimal but I knew you had garnered acclaim for your movie about a little girl that made friends with an eight foot goat or something. I needed the prestige of association. It was to be my big break.

I am wheelchair bound because of the forbidden places to which your film took me. The act of standing robs me of the precious endurance needed to keep the memories at bay. Memories of what you had me do for your masterpiece.

It became clear that you had something different in mind when you asked me to provide a sound for underwater breathing. When I came to you with a recording of a scuba tank you corrected me. "No, not a diver. The Fish Guy in the tank," you said. Then you showed me that concept artwork of your ichthyan atrocity. It was unsettling to consider but I did my duty. I sampled myself breathing through a handful of straws and blowing bubbles into milk. But you wanted more gurgles. You insisted that I put in more gurgles. So I bought a trombone and ruined it by working the slide in a tub filled with marmalade. The result was a very eerie and restrained swish with a hint of muffled popping. That was a sound effect I liked. You still wanted more gurgles and said if it was not a sound that made the audience squirm in their seats I was a failure. I wound up attaching a microphone to the end of a liposuction vacuum and combining the noise of viscous human fat with my emphysema-stricken neighbor coughing up blood.

While I was still mixing that awful noise you asked me how I was doing on the sound of "the Fish Guy jacking it into the tank's filtration system". I put aside my grave concerns about the content of your film and its ultimate destination in order to ask more simple questions that an artists such as the man I was must pursue. Those questions took me to dark places. I had to ask you, Mr. Del Toro, about the size and shape of this abomination's penis. Did you want a sound for it becoming erect? You did, and that was the one where I combined the flexing of leather with a throaty belch and a panther yowl. It would have been best if you had a clear idea of this organ in mind before you came to me. It would have cut down on the time I had to spend under your indecisiveness about whether the protagonist "would have, like, really crunchy lobster dick or if it would be like an oyster but in reverse."

I had to ask about its fluids. You became very excited about the fluids. I plowed through Greek yogurt, motor oil, lard, Windex, bowls of oatmeal, every commonplace semi-solid and liquid I could find. None of them pleased you. I suppose it was serendipitous that you chewed me out me as hard as you did. I forgot to turn off the hot mic when I broke down in tears and it was very close when I blew my nose. Your creature's moment of joy is literally built on my despair. I am glad you liked it but if you were going to put me through all of that I wish you had at least kept that scene in the final cut of the film. 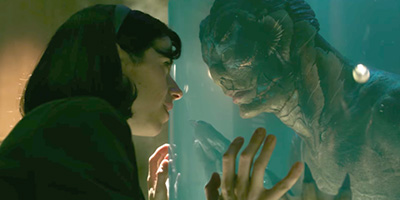 When I had collected that audio sample your literal next comment was, "So what are you going to do about his emissions fouling up the filter system?"

Recalling this process is more than I can bear. The nurses here have sedatives prepared for when the sights and smells come unbidden in my dreams. Suffice to say that when I was finished making your befouled filter there was not an inch of the New York City sewer I did not know by heart. I had committed acts with a pig carcass that not even the most benevolent deity would forgive. On top of all this you made me watch and score that scene six times with you. You were sweaty and enthralled and kept muttering things about "total Oscar bait" and "my piscine David". My wife left me that week for her mother's' house because of how often I woke her from sleep with my groaning.

The day you shuffled into my studio and asked me if I was ready to score "the Culmination" is the blackest of my life. The way you said the words was in and of itself unsettling: "The CulmeeNAAAAAtion". My stomach knotted and I stained my boxers some. I felt my teeth clench and my being shrink back from my body in a transcendental experience of panic as you described what your Lovecraftian fish person and lead actress Sally Hawkins would do to each others' bodies. You took my microphone and I and dragged us to obscene places, Mr. del Toro. 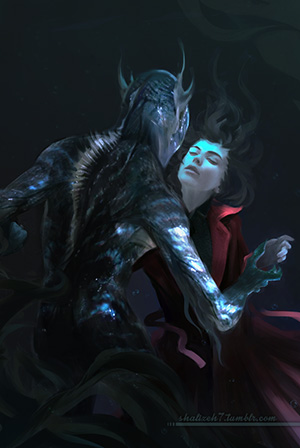 I bore witness to abattoirs of human vice that would turn the stomach of the most callous deviantART erotic fanfic patron. I have scored sex scenes before. I am accustomed to the naked form and can reproduce the sounds of two bodies making love in lavish detail. But those were human bodies. I have never had reason to sample the copulation of so many species of animals before. I spent days at zoos asking breeders if I could not only watch but get right in there. Emails about collecting ambient audio have never before been cause for the FBI to seize my external hard drive. But here we are. Now they have registered me on Sex Offender databases I never knew existed. I cannot visit so much as a pet shop for as long as I live. PETA called last week to let me know they had put a bounty on my head. I did not know bounties were still a thing.

The last straw was not when you asked if I could get some pig squeals because "maybe his rubbery skin and his chitin are chafing" or even when you wondered aloud whether a fish would enjoy having what you called a "gill job" (how did you even countenance such a thing, Mr. del Toro? How can you keep such thoughts alive in your mind and carry on as if nothing were very wrong?) It was not when you stared at me over the wrap-up party's Shrimp Cocktail, thrusting a blue crab leg in and out of the cocktail sauce while wiggling your eyebrows suggestively. It was the day when I thought it was all over and I was lying at home on a couch, down to 137 lbs and subsisting entirely on Everclear and lemon wedges. It was the day you called and said we had won several Oscar nominations and you needed me to accompany you to a nationally televised award ceremony. You wanted me to be publicly attached to this madness not only by name but by face. You were so proud of your creation. I was undone by mine.

So here I sit, Mr. Del Toro. I will never leave these halls, no matter how many times the doctors encourage me to try the outside again. It is safe here and there are no TVs. The film you made will not come here. I will live out the rest of my days playing bingo with the elderly and being tranquilized when the flashbacks overtake me. I am trying to forgive you. But I will never forget.