The Lie of the Technological Singularity 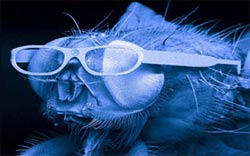 Nearly 20 years of nanotechnology and we have a fly that can read an eye chart.I remember reading an article in sixth or seventh grade about how a secret government lab inside a tree trunk in some black ops forest in California was nearing a breakthrough with nanotechnology. Within a year or two they would be producing "the first of many" tiny robots smaller than a grain of sand that people could inject into their blood stream to clear clogged arteries. What has nanotechnology yielded in the more than 15 years since I read that article?

We have carbon nanotubes, which we get to pretend is nanotechnology because pretty much everything else about nanotechnology, including everything interesting, was bullshit. Now your bicycle seat weighs one ounce less and can stop a knife or something. Progress!

Oh, and they put glasses on a fucking fly. I can practically feel that gray goo gnawing away at my marrow! 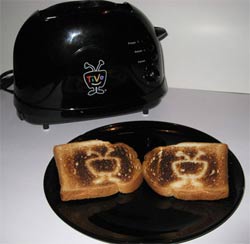 Three thumbs down. My TiVo continually records movies I would never watch on channels I do not even have. I'll turn on the TV and find my TiVo recording the ninth rerun of the Colbert Report even though I told it to record only first run episodes. When I try to change the channel the TiVo will pop up a message and warn me the other tuner is recording something, so I go into the menu and discover the stupid thing is recording a Very Brady Sequel on "Starz!"

Then the next day I realize that the TiVo was doing all of this while it was supposed to be recording something I specifically told it to record. Like an infuriating Frontline episode detailing what Dick Cheney did to democracy with the help of one of those oily cretins that orbit him like satellites made out of law degrees. Law degrees from a law school with "Bible" in the name where they teach you that cutting molars out of Muslims is not only constitutional, but actually honors Christ.

Singularity my ass, figure that shit out TiVo! 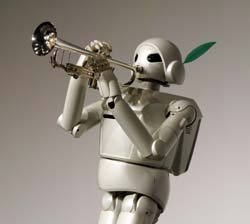 Congratulations, dipshit.Every six months the Internet buzzes with excitement over some chirpy hunk of plastic shit from Japan that looks like a midget astronaut. YouTube videos are posted to forums far and wide and gawping autistics burp that they, "Hail our new robot overlords!" Meanwhile, the robots in the video are usually ambling around at the speed of a polio cripple, holding a trumpet up to their astronaut helmet, or failing to descend a staircase successfully. Nine times out of ten my 96 year old grandma can pull that incredible feat off and this is a woman that thinks gay people are a kind of Chinese.

We're not exactly closing in on the rise of the machines with these Japanese robots. They're walking Furbies with inner-ear disorders and the day I hail them as my overlord is the day they figure out how to motivate bitches to work a corner and not back-sass.

Unless the world can end by downloading the wrong ringtone from a company advertising on MTV2 I'm afraid the technological singularity is about as believable as a lamb figuring out how to open vials.

Hmm, maybe the lamb and Asimo can work together to figure it out.