Let's Brainstorm Some Ideas for Our New ISIS Video 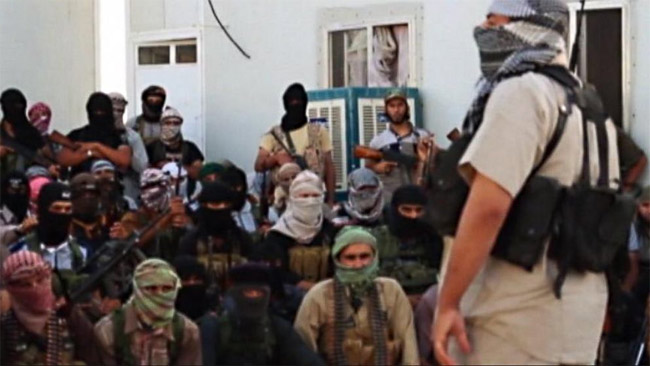 Alright, we're on a hot streak after that Palmyra video, but ancient temples don't grow on trees here, people. We need to put out some more hits. We want this to go viral.

Dynamite dinosaur fossils. Blast those bad brontos who offend the prophet. Nice. These dinosaur things aren't real. Land Before Time bullshit. Let's take them out. No mistaking the Levant for Jurassic Park.

Machine gun an inflatable gorilla outside a car dealership? Was this one you, Muhammad? Nice, nice, I like where you're going. More? Burn the cars with the staff inside. Drive looted tanks over the burning cars and wave black ISIL flags. Be sure to drive that SCUD missile we found over the deflated gorilla a couple times. Good, specifics sell the imagery there.

Bigger machine guns on the backs of dualies. Bigger black flags. Worse music. Push over a statue with a tractor. No. Something bigger. Bolder. Push over a building with a statue. How? I don't know how. I leave that to the guys in black and camo. We're idea men here.

Break up a backyard barbecue. Ruin the steaks. Grope the wives. Overturn the picnic tables. Raid a birthday party. Smash cups of juice out of the hands of little kids and whip the hired party magician for sorcery. Then also kill him for sorcery. Dig up all the skeletons in the graveyard and make them into the bone throne.

Shoot an infidel. Really? Is that all you've got? That one is going in the garbage.

Do we have any ancient scrolls we can burn? Good question. Very good. The answer is no, we burned the ancient ones, but we have some very, very old scrolls we can burn. At least 1970s era scrolls. More old movie posters than scrolls, but they're American movies, so it'll work. Which ones? Ahhhh... let me check. One Flew Over the Cuckoo's Nest and Annie Hall. Woodie Allen, good. I like it. The whole Jewish angle.

Yeah, me too. Cuckoo's Nest is great. I love Chief. I wish I could have met him in person and then sawed off his head on camera.

What else we got here, people?

More heads on bigger poles. Throw paint on all the fur coats. Lecture people about carbs. Shoot pet dogs. Okay, okay, our messages are getting a little mixed. Not enough history. I like the heads and the poles. Always very strong. How about I remix those other ideas and we shoot people we catch with books and then feed them to dogs? No, I don't really know where carbs will factor into it.

Better music. What is this shit? Mohamut, is this your handwriting? What do you want Neil Young to noodle on an electric guitar and then get Jim Jarmusch to film us chopping off his head? I was being sarcastic. My cousin does the music. He is also a slave wedding DJ if any of you need him.

The Pyramids! Yes, of course, public enemies number one through whatever. See if we can get Mohamad in graphics to have some rockets come in from the sides and then a big mushroom cloud wipes out the pyramids. The worst, loudest techno chanting we have at max volume. I really want Muhammet to blow out those levels on the mix. Like a drive through speaker.

Alright, these are good. Good. I feel like we're easing off a little on the beheadings. Do we have any professors or museum curators we can chop up in an airplane propeller? No? Okay, I'll tell Muhamed to put out a BOLO for old professory types we can throw into a propeller.

SAW movie traps. Niiiiice. I like it. We can test their faith in the prophet by making them cut off their hand and then when they escape the room full of acid we'll shoot them anyway. Lose-lose for them, win-win for us.

Just throwing this out there myself: have we killed anyone with a missile lately? I think it's been since, what, Kobani? Mosul? Let's rack that one up for another take.

Last one here... it just says "schools" and then it has a big "X" drawn over the word. What is that? No more schools! Got it. Nice. We can dynamite all the schools, except the schools we run, of course. The ones where we make kids shoot their parents.

You know, sometimes I think doing that's a little much, and then I remember our flag, how it's black, and I think, nope, jussssst right.