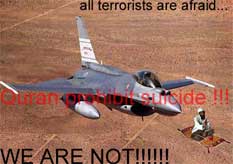 I'll be the first to admit I really have no idea how to solve this shit in the Middle East. It's pretty much a lose-lose scenario:

OPTION A - The US pulls out its troops now and saves a shitload of money and lives. This won't work because all the terrorists will see this as a sign of victory over the Great Satan, and America will become an even larger target. Any sign of weakness with terrorists is practically an invitation for them to come over and start blowing your shit up.

OPTION B - The US stays in Iraq to stabilize the region. This won't work because - hell, it's the Middle East - there's no way to stabilize it. You'd think that somebody would pay attention to history and realize this, or maybe ask Russia about their experiences over there, but I guess our government knows more than everybody ever.

The people there hate us, and really, I don't blame them. Most of them are misinformed and don't have access to all the information and viewpoints we do; to them, we're just a bunch of arrogant assholes invading their space and enforcing our views and rules upon them. Most of our soldiers there probably dislike the general population of Iraq and don't give a shit about what some filthy guys with beards think of them. They're just doing their jobs in a really horrible area of the country, and it's making them miserable being so far away from their loved ones and "civilized" society. The Iraqi citizens, meanwhile, are living their lives around a group of foreigners who don't speak their language, don't want to be there, and are holding very powerful automatic weapons. The soldiers don't have to answer to any government and there's nothing preventing them from doing what they want when they want, because the US government is running the show over there.

I have incredible respect for all members of the armed forces, and I really pity the guys wearing camouflage and holding assault rifles in the Middle East because the American government has deemed it important. Nobody wants to be in the Middle East, not even the people who live there. We need to bring our soldiers back and stop wasting billions of bucks a day on this futile attempt at a Middle Eastern stronghold. Unfortunately, this cannot be done, as the enemy would see it as a sign of weakness, the limited order imposed there would degrade into chaos, and we would've wasted so many lives and dollars on an utterly pointless endeavor.

So what the hell do we do? You got me. What will be done? I have no idea. There's no good solution for any of this, and there's no easy way out. The only good thing here is that we'll be getting all kinds of awesome new technology as a result of war spending, and us consumers should start seeing it in half a decade or so. War spurs technology, and perhaps this clusterfuck in the Middle East will help America inch our way back to the top of the engineering circuit. After all, war technology is one of the few things the US cannot outsource to Japan or China.

Sorry about the politics, but this whole Iraq deal is pretty screwed up, and I have yet to hear a plausible solution from either side of the debate.