I'll Tell You Where Your Ten Bux Goes!

Front Page: Front page content doesn't grow on trees ever since content trees became extinct because of the greenhouse effect. However, there are some ways we can minimize the financial impact that generating content can bring, such as recycling jokes from previous articles or from the same article and stealing timeless ideas from The Simpsons that everyone loves and cherishes. At the end of the day though, you'll have to fork over the dough for some content. 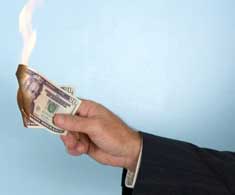 Sign up for our forums today!Something Awful employs a varied team of writers who bust their balls generating blood, sweat and tears, and the occasional article. Our team has ballooned to over 6,000 over the past eight years and it's still growing. By 2012 scientists predict that Something Awful's writing team will surpass that of the population of the planet Earth.

There has been some controversy over the years. Do people come for the front page and stay for the forums or do people just bypass the reading entirely and go straight for the posting? Unfortunately the latter is probably true and so the forums registration fees sort of subsidize the front page.

It seems that sites like "GARY'S HILARIOUS VIDEOS" which include copyrighted clips from various TV shows are way more interesting than a team of writers busting their balls trying to think of something original to say, and sometimes succeeding! While the most work Gary and his ilk do is upload clips from Borat onto his web site, these guys make over 70,000 dollars a week, and they all have the same goddamn content!

Not to worry though, only $1.08 of your one-time sign-up fee goes to operating the front page. My bank account is restored ...but I'm still hungry.

Taxes: "Lowtax" isn't just a nickname, it's the exact opposite of the old man's financial situation! While I'm not actually privy to any of his financial information and this entire article is a sham, I do know that small business owners get fucked by the IRS. The power hungry Jewish Illuminati keeps taxes on small business owners high and gives kickbacks to super mega stores so the Wal-Mart situation becomes so huge that it distracts people from the real problems this world faces, such as the failing PS3 console.

Whatever... as Squall Lionheart would say. Roughly half of registration fees goes to Uncle Sam. And we still had to buy body armor for the U.S. military! Well, mo' money, mo' problems, as Biggie would say. So let me just say thanks for ridding Something Awful of most of its problems, U.S. Government!

Family: Running a successful web site shows that you are responsible enough to convince a girl to talk to you, marry you and let you impregnate her, not necessarily in that order. In fact, Lowtax is the first webmaster in history who married a woman that didn't weigh as much or more than he does. It was quite an accomplishment and was covered on all the cable news channels. 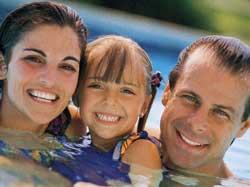 From left to right: Megan, Lauren and Richard enjoying a dip in the pool.Of course, raising a family can be expensive and is a considerable drain on the resources that could otherwise be going to the Something Awful Forums. Just think, if he didn't have to feed that kid we could have had a pool table for Helldump a long time ago.

That's why Lowtax is doing the honorable thing and putting his daughter to work. That's right, next week Lowtax Jr. will be the new host of Weekend Web, leaving me essentially without a purpose in life. She'll be tackling the worst in baby-orientated forums like GerberGraduates.com, babyrashfetishforum.com and Nintendo.com.

By entering his daughter into slave labor Lowtax has reduced the amount of money your registration fees go to feeding his family to 52 cents per account. Child labor, it's just another one of life's sweet treasures.

Miscellaneous expenses: There are a myriad of other expenses that go towards running a successful web site, not the least of which include:

In the end I must say that I don't actually have access to any Something Awful financial information and this update was just all in good fun. But let's be real here, we know where the money is really going...

MANGOSTEEN AND $1000 CHAIRS MUWAHAHAH! SEE YOU IN HELL, COPPERS!!!