The Sopranos and Sharing Feelings

Let me be the first person to admit that I really enjoy Mafia-based entertainment. Having grown up in a family which is roughly 138% Italian, it is quite easy for me to relate to people who spend more money for one day's pasta than the entire GNP of Canada. I've seen all the movies about "The Family," ranging from that one where the gangsters murder the guy, to that other one where the guy dies because he's murdered to death by the gangsters. There's something about a Mafia Family that appeals to the most basic of our human instincts. A lure that attracts and pulls us all in. An intangible quality that mystifies and amazes us. Nah, forget all that crap; the Mafia is cool because they pistolwhip a lot of people with handguns. 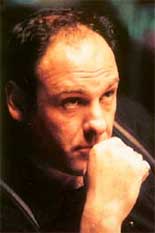 "I'm thinking of a number between 1 and 500. This is the number of times that I'll beat you with my gun."

Whenever you watch a movie and see a phalanx of fat Italian guys in multimillion dollar suits slowly walking through a club, you just know somebody somewhere is going to get pistolwhipped. That's how the Mafia works. If you default on a loan, you get pistolwhipped. If you default again, then you and your best friend get pistolwhipped. If you default three times, then they pistolwhip and shoot you, your dog, and that guy who bagged your groceries last week. Then they pistolwhip the bullets lodged in your skull, forcing them even further into your brain. You shouldn't do business with the Mafia if you're not prepared to be pistolwhipped on an hourly basis, as that's pretty much a given business practice these days. That's why most Italian guys have broad, wide noses; they spend all day bashing themselves in the faces with 9mm handguns so when the Mafia boys come around to buy a newspaper or get their cars cleaned, they'll be prepared for the inevitable pistolwhipping. Occasionally, when the target is too far away to get beaten in the face with a handgun, and the Mafia goodfellah ate too much ravioli to lumber after them, they will rotate their guns around and use them to actually shoot the victim. This doesn't happen too often though, as shooting people has become "passé" in the Mafia culture. It's all about the pistolwhipping now, baby.

So it saddens me to reveal just how utterly disgusted I am with this year's episodes of "The Sopranos," the HBO hit show about a 45,000-member Mafia family in the New York / New Jersey area. A friend originally turned me on to this show a couple years ago, having successfully convinced me that it was not about a deaf piano instructor in World War II (which, for some inexplicable reason, I thought the show revolved around). Back then, the series was great. Tony Soprano and his goon squad routinely drove from scene to scene, beating the crap out of people with really long last names and spewing more profanity than your average junior high school girl's bathroom. Every episode had a body count in the mid-hundreds, and the slick dialogue kept the plot moving at a lightning speed:

TONY: "Fuck, motherfucker. Who the fuck offed this shithead?" (points at a person who looks perfectly healthy, aside from the fact that 99% of their head seems to be missing)

TONY: "We gotta fuckin' fuck this fucker to the fucking fuck."

Then a car would run into a wall, somebody would meet the business end of an aluminum baseball bat, and Tony would come home to greet his family and suppress the stress of working in an industry that promotes removing key organs of your competitors. One week later, the same events would occur in a slightly different order and slightly different location, but the series would somehow continue to stay fresh and new. The show survived on the sheer strength of the characters' personalities. Well, that and the fact that a few busload of people were bludgeoned to death with kitchen utensils every episode. 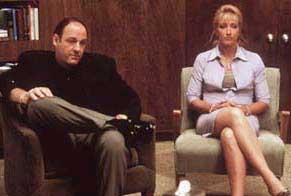 However, something has changed this year. The writing has shifted away from "encountering people and making them a lot more dead" to "discussing feelings and emotions for 52 minutes." Instead of pouring gasoline all over a rival family's bodyguard and mailing the remains to their post office box, the Soprano crime family now just sits around in a restaurant and discusses their emotions and how it affects them. Then Tony comes home, doesn't talk to his wife, and goes to sleep. Bam, episode is over. Tune in next week to see Tony and crew discuss how talking about their emotions impacted their lives! Then he'll visit his psychiatrist and rehash what we just saw! Then he'll come home and NOT tell his wife what he just spent a good six days doing! Wow!

The dialogue has changed as well, although it's not really that noticeable.

TONY: "Fuck, motherfucker. I can't believe some cocksucker is trying to move in on my territory."

PAULIE: "What you going to do, Tony?"

TONY: "Sit at this fucking table and bitch about it for 52 minutes, until I see my name scroll up from the bottom of the floor and move towards the ceiling."

THAT ANNOYING GUY FROM "THE MATRIX" WHO EVERYBODY WANTS TO SEE DIE: "Hey Tony, I just killed a hooker! It's the only person that will die this entire season!"

TONY: "Fuck. This makes me really fuckin' displeased. I'm gonna fuckin' obsess about it for a few dozen episodes, but under no circumstances will I kill you or my idiotic sister, which is what the audience has been praying for since day one."

So, to summarize, all the pistolwhipping and actual crimes have been replaced with emotional discussions and a whole bunch of sitting around inside restaurants, eating things covered in red sauce. Yet I continue to watch the show, lured by the empty promise of somebody actually suffering bodily harm or at least waving a gun in the general direction of another human being and shouting disparaging words that concern them and sexual activities involving their mother. And after I've woken up at the end of the episode, I realize that once again I've been let down and disappointed, much like all my network experiences running this site. I was thinking of writing a letter to let the producers of "The Sopranos" know exactly how displeased I am with their lack of person-killing and exploding cars, but I believe I shall instead take a Soprano-like approach to dealing with this. Yes, from this point on, I shall simply sit around my table and discuss my extreme displeasure regarding this show and how it affects me, while tossing in the word "fuck" a few hundred times per sentence. Shit, that's what I've been doing on this site for years now. Uhhh, time to move to plan B: hunting down the writers and pistolwhipping them until they see the virtues of traditional Mafia movies. You can come down and help me out, but we'll spend a good three hours discussing our feelings afterwards.

Cliff is Back and is Slightly Displeased

Everybody's second-favorite West Appleton resident (L-Bone being the first, of course) has returned with five brand-spankin' new pictures of mutants and freakshows that he just can't stand. Why? Because he's Cliff Yablonski, that's why!

hey ratface, I just updated my goddamn site. tell your idiot readers to stop mailing me. I hate them. I hate you.

Boy, what a guy! He's all heart, fellahs! Say "thank you Cliff" by heading on over to see what the Yablonski is cooking!

Ooooh, another ROM Pit Review? You'd better believe it, bucko. Today we've got a look at Beam Software's The Three Stooges, a game which refuses to let the three comedic geniuses rest in peace.

What do you do to financially capitalize on a long dead comic trio? Why you condemn their poor souls to an eternity of shame and further grave spinning by making a game based around them! This title by Beam Software (makers of Bad Street Brawler) is a conglomerate of a board game and a puzzle game, only without any strategy or logic that either may require. Now before we go any further, I’d like to mention that I actually owned this game during my crazy elementary school days. I also had a tendency to wet myself in public situations. Coincidence? Damn you, Beam Software!

Exciting! Check out the review or I'll hit you with a comical prop!