Uh-Oh! The Repo Truck Have Started to Move!

A sad day has come folks, as entrepreneur and humanitarian Sam Jain, the CEO of eFront, is probably being evicted from his apartment as you read this. I tried to convince Lowtax to set up a PayPal donation account to help the poor bastard keep his flat screen TV, DVDs of "Saved By the Bell," and RealSensation Self-Lubricating Goatse.cx Pleasure Pals. R-Lo was hearing none of that, muttering something about raping Sam and spitting on him while he wandered around in his bathrobe on the tail end of a five day drug-induced bender.

I for one feel really bad for the guy! Sam Jain was practically a saint - canonize that go-getter right now, Mister Pope! When everyone else was kicking him in the sides, he had the moxy to demand his employees continue working for free. He had the gumption to give the unpaid webmasters a false sense of hope. Sometimes when enough people passed out from exhaustion and malnourishment, he even "hired" some affiliates to come work in the offices. They started at the same wage as everyone else; absolutely nothing!

And who are the web masters to complain about not getting paid for entertaining people? The e-mails they get telling them how shitty their posts were that day should be more than enough of a reward for them! You'd think eFront signed a contract with them or something, sheesh! Besides, how can you expect someone to pay you every day for being funny when you are only funny about two-thirds of the time?

Oh, hahahahaaha, oops, I was high on the goofballs again. I retract my previous statement and would like to wish Sam Jain a long and fruitful life lying to the rats that gnaw on his eyelids while he sleeps under a bridge.

He's a fun lovin' criminal!My generation - the "we rocked for almost two years and then became worthless lowlifes again" generation - is sure to breed a higher percentage of serial killers than any past generations. Yeah, the baby boomers may have had stuff like Vietnam, Soviets, and Abba to turn them into serial killers, but we've got Desert Storm, Palestine and American McGee's Alice to make us loony. So why not turn to a career as a serial killer? The job market is starting to go absolutely lousy... and have you ever seen one of these guys not look happy? Hell, when they brought in Son of Sam he looked so pleased you would have thought they told him he got selected for the Anarchy Online beta test.

However, being a jet-setting serial killer comes with a lot of responsibility, to both your victims and your public. There are three rules that every serial killer must keep in mind at all times: get a good media title, never vary your methods (you want to get caught, remember) and finally, have a good cover for your serial killer secret identity. Seriously, I saw all that on one of those wonderful A&E shows about serial killers. Man, that Peter Graves can make anything classy, I'll tell you that much.

Let me work backwards in explaining that list because I'm "criminally insane" like that. No really, I was incarcerated for biting people at the grocery store.

The Secret Identity The secret identity should be a believable front for your alternate life as a murderer. Somewhat like the "good girl by day / bad girl by night" syndrome only with fewer pairs of hotpants involved. This front can also serve to help you find victims, like evil clown John Wayne Gacy or evil homosexual Jeffrey Dahmer. Be careful though, as this can be taken too far. Don't choose something like "Airline Hijacker" as your front, because that might attract too much attention to yourself, and then you'll never get away with even a single string of prostitute murders. Other bad examples would be butler, PCP addict, Viking berserker or Something Awful forum poster. 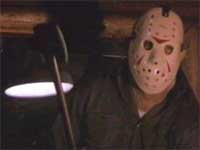 Results may vary.Whatever your means for disposing of your victims, you need to stick to your guns (no pun intended) and leave lots of circumstantial evidence. This way the crack detectives who are on your trail can just wait for you to kill again and turn up more evidence. All serial killers ultimately want to be caught, so it is vital that you never try something new or experiment. Let's say you're an average axe wielding psychopath and you've decapitated a half-dozen Asians. All of the sudden you feel like sharing the wealth with someone new, but your axe arm is a little tired, so you make a pipe bomb in your mom's basement while the voices from the portrait of your uncle tell you to kill a Caucasian sorority girl. Buzzzzzz! Think again. It doesn't matter who you start murdering, but you have to keep murdering that same type of person and never EVER use a completely different murder weapon. Sometimes you have to disobey the disembodied floating head of your uncle and just stick with those pesky Asians.

Name Recognition If you have a cool middle name like Herbert or Thanatos, you shouldn't have any problem with this, as the newspapers and TV news programs will just refer to you by your full name. If you have a non-cool middle name like Persephone or Sunshine, you might be in a bit of trouble. Not to worry, the way to get around this little problem is to choose a method of killing that is unusual or really strikes fear into people. I mean, the Boston Strangler's real name was "Leyland Euronymous Templeton"... how stupid does that sound? Just think of it though, no matter what your name, you could be the next East Appleton Suplexer or The Golf Club Bandit. Actually, I don't think they ever refer to serial killers as "bandits", unless they disguise themselves as raccoons and hide in the trash.

In conclusion, if you stick to these three rules, you can rely on your own cold blooded creativity to really go places in the world. It might be life in maximum security confinement or even the electric chair, but you'll be famous like Vic Tayback.

Did Someone Order a White Russian?

Lowtax has finally decided to end the anticipation! With great excitement, I announce the completion of the best game to ever feature a dancing Russian in homoerotic situations: Dance Dance Karnov. DDK has quickly become my ultimate joy in life. Now the only thing I am missing is a Cossack-themed dancing pad so I can toss my keyboard out the window.

Suddenly Earthshaking became, and dishes rattle from ceiling! Karnov runs outside to investigate occurance! A enemy! Oh no!

"You'd receive a generous come-uppance!" shouted Karnov while flexing muscletone. "My powers increase from the dance, and soon I will dance your head until the ground!!! For your attempts to destroy my preferred maltshop!"

This Lowtax original features all the greatness you have come to expect from Karnov, including the superstar characters Dancing Green Fish Guy With a Bag and a Hand Down His Pants and Yoda in a Nest. I don't remember the disco sequence or Karnov at a male strip club, but I guess R-Lo took some creative liberties. Play now or regret it forever!

The bad boys of backyard wrestling, the "Backyard Love" superstars, have offered up another ten pound goiter of pain and lessons learned. Let's listen:

well see you have to put his trust to the test. make him prove that hes not a liar like the guy at the walmart who said that colecovision is outdated and theres better stuff out there. i beat that liar with my tail until his skull collapsed. i hate liars. so you have to put his love to the test. go to a construction site and go to the top. then light stuff on fire and throw it at him. if his love is true then he'll be able to avoid the stuff and get to you and a big heart will appear. thats how you know its true love. hes probably a liar like all men are. just like all men he will be defeated in front of my hands. bring your kid and mother too so they can see him suffer. he can try to get that purple floating umbrella but it wont help him. these barrels are full of truth!

And you thought you had to leave your house and pay some fancy-pantsed "licensed psychiatrist" to give you guidance like that! Think again buddy, not only are the backyard wrestlers offering free advice, they are offering it with a side of foreign object.

Drawn Out Pranks Are the Best

I feel guilty plugging my site on SA, let alone someone else's site. However, a friend of mine just completed a hilarious prank that required over two months of trickery and deception. His target? Those damnable cyber-squatters who buy up thousands of domains just to sell them to companies at ludicrously inflated prices. Read the saga of Networkcowboy.net.