Tuesday, Jun 29, 2004 by Rich "Lowtax" Kyanka (@TwitterHasBannedAllMyAccountsEver)
Know of an awful site? Send it to us and become a hero!

The Creator's Rights Party Pro-life Christian Anti-abortion Webs, submitted by GodComplex. I was raised a devout Catholic by incredibly un-devout Catholic parents. They even sent me to an all-boys Jesuit religious high school so I would hopefully learn more amusing anecdotes about Jesus while somehow resisting the lure of homosexuality. Somehow, since then, I have slipped out of the religious stranglehold, and the only Christian-centric thing in my life is my girlfriend, who gets mad and yells at me when I make rude comments about Jesus. Despite all this, I'm fairly sure that Christianity doesn't promote the use of nuclear warheads to secede from the "unholy" section of America, whichever section that may be. I'm guessing "Texas" because I've honestly never met a single person from Texas that I didn't want to stab in the face with a rusty metal dagger. Good thing rabid Christian Jesus Fan #1 Neal Horsley actually views secession via nuclear weapons to be a viable option in this wacky day and age. 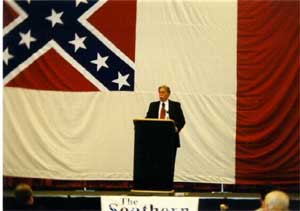 The secession movement strategy outlined below has the power to force the people of the United States of America to choose between three options: (1) return to God's plan for government; (2) allow a State or States to secede from the presently united States of America; or (3) enter a period of nuclear civil war.

Only two prerequisites are required to realize the scenario just mentioned, (1) nuclear weapons must be available to a seceding State Government or Governments, (2) a seceded State Government must have the will to use them.

With the exception of Secession itself, both conditions are presently in place. Condition One: Availability. Nuclear weapons are siloed, armoried, or secreted in virtually every State in these presently United States of America. One of the first acts a seceding State militia must accomplish will be the seizing of those nuclear weapons. Once in hand, that seceding State will have the power to force the rest of the citizens of the USA to choose between accepting secession as a fait accompli--a done deal--or launching nuclear civil war in the heretofore United States of America. Condition Two: Will. I represent a Political Party (The Creator's Rights Party) that would not hesitate to use nuclear weapons in defense of a State's Right to secede in order to restore God's plan for government.

I know this will come as an absolutely mind boggling idea to many citizens of the United States of America, but there are people here--lots of them--who are willing to live and die in defense of the Rights of the Creator. If you don't believe it now, unless the desecration of God's authority is arrested in the USA, you'll have the opportunity to see these people demonstrate their willingness to see God's authority restored or die trying.

I personally think that giving religious nutjobs nuclear weapons is an excellent idea. I wholeheartedly support our government handing out nuclear warheads to every raving Christian fanatic in our fine, fine country. Then, when this raving lunatic decides he's had enough sass from the homosexuals, adulterers, minorities, and rival religions, he can push this big red button labeled "BLOW UP NUCLEAR WARHEAD." This won't actually cause the warhead to detonate, it will just cause a little puppet Jesus figurine to pop out of the warhead and begin laughing like a clown while all the nuclear radiation from inside the missile leaks out to ensure the fanatic will never, ever, ever be able to reproduce. Cancer Jesus will have saved us from another generation of religious idiots and all shall be good.

Of course if my girlfriend is reading this, then what I meant to write was "Jesus is good, please don't hit me."