"This has been a very sad few days in the history of New York, and for me, it's been sadder."

Paterson is right, it's been a bad week for New York democrats. A tragedy for them has helped catapult a black man to a historic first and a tragedy for them has helped...catapult...a black man...to a historic first. Gollum-like Hebrew Hero Eliot Spitzer was caught trying to bareback a 22 year-old prostitute by an FBI wiretap, ending his brief career as the Incredibly Unpopular and Widely Hated Governor of New York. Meanwhile, former Mondale VP nominee and New York congresswoman, and current batshit moron, Geraldine Ferraro went on a whirlwind media tour in an effort to convince every single black American to hate New York Senator Hillary Clinton. In this edition of Profiles in Scourging we celebrate the amazing lives of these two towering figures in American politics. 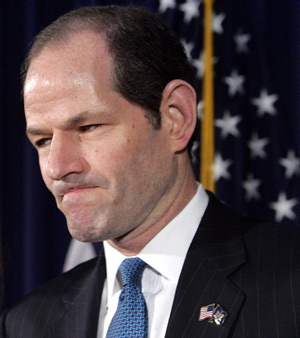 Good thing he wore his American flag lapel pin while apologizing for fucking a hooker. He might have started a controversy without it! Many Americans probably didn't know Eliot Spitzer before this week, but he is a legend in New York. A former Attorney General, he earned a reputation as a self-righteous crusader for the working man. Rhetorically, he was a bit like an uncharismatic Jewish John Edwards with a hard on for wrecking the rich. He played hardball with anyone he felt was doing wrong, going after prominent businessmen and sleazy criminal kingpins.

The unimpeachable saints that live on Wall Street grew to hate Spitzer, who often pried into their practices or brought down business figures he felt had crossed the line. He ruthlessly destroyed careers and tarnished a lot of reputations. He made a lot of enemies and most of his friends weren't particularly powerful, but he had the mandate of the people. Spitzer was and is a New York celebrity for his high-profile prosecutions and his hard-bitten "keeping 'em honest" persona. Democratic supporters compared him to Eliot Ness, possibly because they were too intellectually lazy to look beyond the shared first names.

In 2005 Spitzer announced his bid to become Governor of New York. He crushed his Democratic rival and was so favored in polling against sitting Republican Governor George Pataki that Pataki feigned interest in a Presidential bid and dropped out to avoid a humiliating defeat. Spitzer went on to defeat the disorganized Republicans and win the election with an ominous 69% of the vote.

Talk was already beginning that Spitzer might become the first Jewish President. His political adversaries grumbled that Spitzer had gone too far in many of his prosecutions and had bullied his way to power using his stint as the AG as a weapon. Powerful forces in New York lined up against him and his governorship was almost immediately neutered. Messy fights and harsh accusations flew back and forth. One famous outburst from Spitzer earned him the moniker "steamroller", although a look at the whole quote seems more meaningful in light of the recent scandal.

"Listen, I'm a fucking steamroller and I'll roll over you and anybody else." 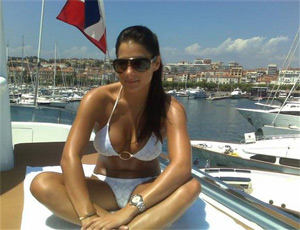 Spitzer paid Kristen over 5,000 dollars for a single two-hour session and a downpayment on his next visit.Yes, Eliot "The Fucking Steamroller" Spitzer faced gridlock and approval ratings that looked about as comforting as a massage with release from a Chinese girl with knives for hands. His enemies were growing in power and in number. He seemed doomed to be a one term failure instead of "America's First Jewish President" unless he could reverse his fortunes.

As it turned out, Spitzer couldn't so much reverse his fortunes as step on the pedal and drive the fucking steamroller off an FBI wiretap cliff. During the course of a prostitution sting, the FBI learned that for six years Spitzer was frequenting an elite Manhattan escort service called the Emperors Club VIP. Most recently the Steamroller (identified in transcripts as "Client No. 9") was fucking a 1,000+ dollar an hour call girl named "Kristen", soliciting classical music CDs from aides to set the mood for his sessions, and potentially involving taxpayer funding in the affair.

Further adding to the hypocrisy of Spitzer's downfall was the fact that he had investigated and broken up at least one major prostitution ring in New York. His political enemies crowed and the floor of the New York Stock Exchange literally filled with cheers and applause. A lot of people fucking hated Eliot Spitzer.

Spitzer dutifully trudged before the media to apologize with his unfortunate wife by his side. New York Republicans gave him a 48 hour ultimatum to resign or be impeached. What few friends he had in New York gave emotional comments to the press. Jim Cramer, host of Mad Money, was particularly distraught. Cramer appeared on TV nearly weeping with sorrow at the idea that Spitzer had been banging a hooker for six years.

The Fucking Steamroller's inability to keep that pesky participle away from the steaming and rolling ended with his resignation. Lieutenant Governor David Paterson stepped in to replace him, making Paterson New York's first black Governor and America's first blind Governor.

Adding insult to injury, Spitzer was a Clinton supporter, one of her superdelegates, and the man behind the licenses-for-illegal-immigrants program that threw Clinton off in an early debate. The new Governor of New York would become a Democratic superdelegate, but Clinton still loses one from her column since Paterson is already a DNC superdelegate.

Spitzer will probably go on to a career enjoying his fabulous wealth and writing an autobiography. His well-paid friend Kristen will probably be appearing in Playboy or, at the very least, Hustler to offset her sudden unemployment.