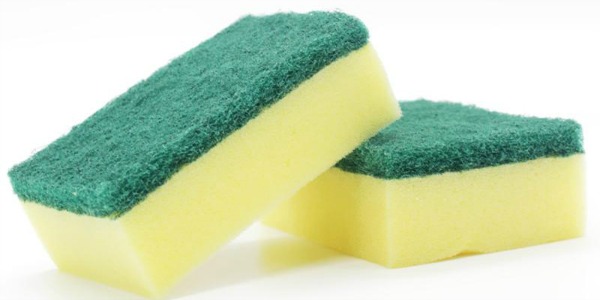 My dudes, we've all been there. We're content to live in an absolute pig-pit until some uppity broad enters our lives and starts enforcing ridiculous demands like "pick up your dirty clothes" and "stop wiping yourself with the same hand towel for weeks on end." And, of course, they want us to wash the dishes. While we're happy to co-exist with a towering testament to the many chicken wings and riblets we've devoured over the past month, the weaker sex isn't equipped to handle roving clouds of harmless fruit flies. So, what are we supposed to do? Throw on a dress, castrate ourselves, and prance around to ABBA while we daintily squirt lavender-scented soap onto fine China?

Well, now you can reduce yourself to doing women's work and keep your masculinity fully intact. Introducing:

"But those just look like ordinary sponges," you say? Seems like someone's done too many keg stands--or maybe not enough, pussy. Our team of absolutely-not-gay scientists has developed the perfect accessory to put you more at ease with the shameful act of cleaning up after yourself. Just check out how much these sponges will absolutely wreck your dishes' shit.

Patented Skin-Shredding Technology: Dishpan hands? More like dishfucked hands. Every Elbow Grease sponge is jam-packed with a powerful skin irritant engineered to leave your fingers and palms red, raw, and bleeding. Instead of walking away from a pile of clean dishes smelling like flowers, you'll look more like you entered a hands-only MMA match with Satan himself. And you owned that red bitch.

Guaranteed One-Use Durability: What do you do with an Elbow Grease sponge when you're done? Toss that bad boy in the trash, because nature can suck it. The only way you can prove you truly existed is to fuck up the planet as much as you can before you die, so every pack of our sponges comes with a durable plastic six-pack holder, guaranteed to not biodegrade for tens of thousands of years. And if any birds and fish get caught in one of those rings? Fuck 'em. Those shits are dumb as hell anyways.

Soap-Owning Strongness: Other sponges--the ones made for women and weak men--don't absorb shit. Elbow Grease will completely fuck up your dish soap and leave it begging for its life. "No, no, no!" it'll scream before Elbow Grease curb-stomps that fucker's head in and goes to town on its torso with a baseball bat. And thanks to our partnership with ThinkGeek, we recommend pairing one of our sponges with their popular bacon-scented soap. It comes in a plastic Tardis, but we've been assured it's absolutely not gay as hell.

Man-i-fying Chemical Additives: We know. Elbow Grease sponges may help make doing dishes more tolerable, but there's always the chance you could literally become a woman. That's why every square centimeter of our sponges contains the most testosterone allowed by law in most states. The lab monkeys we exposed it to killed each other in a violent, ruthless, weeks-long battle, so we can tell you one thing: it works.

So before you tell that bitch to pack her shit, remember you can still fuck and order Elbow Grease: Tactical Dish-Blasting Friction Engine sponges--the one sponge you can only buy with BitCoin. Use the code "redpill" to get 3% off shipping on your first order.