The Edge Of Darkness is an upcoming film about a dude (Mel Gibson) whose daughter gets killed, compelling him to kill the dudes that killed her, killing his own humanity in the process.

This morning on SportsCenter, I happened to catch a seemingly random collection of clips from the movie spliced with footage from NFL playoff games. It didn't seem to make much sense. However, when the whole thing culminated in a graphic that read "Edge Of Darkness: Edge Of A Championship", it made even less sense. 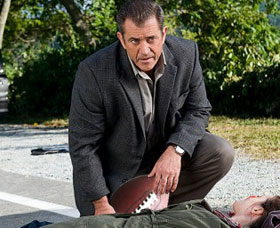 We tend to make stuff up on this website, but all of the above is 100% accurate. You know what the scary part was? Aside from the promotion airing as a segment on the show and not as a commercial? The fact that it wasn't the worst example of movie marketing awkwardly cramming itself into sports coverage like a square peg in a round peg deflector.

Let's go back to NBC in the spring of 2008. A commercial comes on, the string section of an orchestra playing something somber as a black screen dissolves to reveal slow-motion footage of Kerri Strug attempting to win the gold medal with an injured ankle.

Quick cuts of international news outlets reporting on the events of the 1972 Olympics. As an english-speaking reporter gasps "Oh my god", Kerri Strug lands the dismount. A crowd cheers.

The 2008 Olympic Games - This summer, only on NBC
Munich - Now available on Blu-Ray

That always made me feel uncomfortable. Seeing her struggle to put weight on that foot makes me cringe every time.

How about 1996, and the first cross-promotion I remember seeing on ESPN? It opened with the famous scene from Happy Gilmore in which Adam Sandler yelled "Get in the hole!" at a golf ball that he wished to go into a hole.

After that, a flash of Derek Jeter hitting a baseball.

Followed by Javy Lopez catching a routine pitch. For roughly three minutes this continued, alternating between clips of the New York Yankees and Atlanta Braves (the teams in that year's World Series) and Happy Gilmore playing golf while "Machinehead" by Bush played at full blast.

At the conclusion of this segment, the screen simply read: Jerry Maguire

Actually, I sort of liked that one. It's almost quaint compared to the worst example I can recall.

The opening shot, Kobe Bryant putting a spin move on three defenders, laying an elbow into the closest opponent and dodging several outstretched arms as he tosses a circus shot backwards over his head. It goes in without even grazing the rim. "Remember The Name" by Fort Minor serves as the bouncy backdrop.

Next, from a similar angle, we see several people in casual workwear pressing forward in a confined space, reaching out toward one man with a look of determination that matches Kobe's.

Basketball again. LeBron James takes a hard foul at the apex of a jump, his arms flailing as he falls toward the court face-first.

The cockpit of a plane. A vast field rushes up towards the camera at dizzying speed. Impact is a millisecond away...

Shaquille O'Neal throws down a ridiculous jam, the ball in his hand digitally replaced with a Boeing 757. As he slams it home with authority, a cgi fireball explodes, filling the screen.

Steve Nash attempts to shoot a three-pointer with an airplane as time is about to expire, but Ron Artest jumps into view and blocks the shot enthusiastically, creating an even larger explosion.

The clip of LeBron James falling continues where it left off, showing the superstar impact (with an explosion) and roll from side to side in pain.

A quick cut to a reaction shot, dozens of stunned people in an FAA control room.

LeBron, back on his feet, delivering an incredible reverse jam with another airplane, causing the biggest explosion yet.