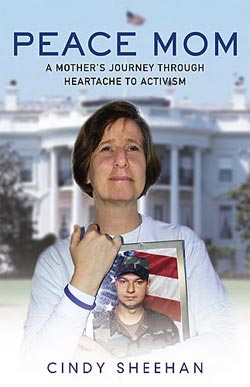 Gold Star Families for Peace, submitted by Cindy. It's too bad an organization based around families that have lost loved ones in the Iraq war has to have Cindy Sheehan as their spokesperson. Their horrible mess of a website accurately captures the too-many-cooks shambles of the liberal peace movement.

Whenever I hear the shrill and quivering voice of Cindy Sheehan speaking on the news a cold shiver of horror tickles my liberal spine. I don’t even need to see her pinched drama-mask of a face leaking tears on command for the cameras to know that something really stupid is about to ooze out of her mouth. Whether it’s leaving granola wrappers on George W. Bush’s front lawn or screaming randomly at some lame Democratic apparatchik like Rahm Emanuel, you know what she is saying is going to make the liberal soul cringe.

I have to confess, I fell for her first stunt. I think every relative of a dead soldier is entitled to one public outburst where they cry and hold an 8”x10” picture of their son.

Sheehan’s one allowed outburst was fabulously well-timed. She trekked to Bush’s Texas Ranch in 2005 demanding an audience with his lordship. She would never grant that audience. She set up “Camp Casey” the day he began one of his bloated five-week vacations. Protestors accumulated in a roadside ditch, wantonly bedraggled and magnificently pitiful.

Nearby ranchers leaned on their cattle fences, chewed pieces of straw and pushed Stetsons from sun-red foreheads in a uniquely Texan form of bemusement. Seeing a bunch of liberals huddled in a drainage ditch and singing Kumbaya must have been as strange a sight to them as a pink giraffe or an ACLU card. A few even spoke out and said Bush should just get it over with and talk to them, although this goodwill evaporated once the port-o-johns started leaking.

A five-week standoff developed, with Bush roaring past the protestors (and their attendant media crews) in black armored SUVs. He waved at first, but by the second week there was the real sense that he was under siege. It was all very hilarious to me. I could think of no one more deserving of a ruined vacation. He lost a couple popularity points and looked callous, so liberals could overlook Sheehan’s ceaseless screaming and annoying self-righteousness. It was in good fun, after all.

Then something horrible happened. Camp Casey broke up and the liberals started to drift back to their respective universities and sodomy collectives. Everything seemed to be winding down. The media was heading home. Bush was back in Washington. Sheehan was ready to call it a day. Oh no, wait, she wasn’t. Cindy Sheehan had decided to turn her media stunt into a crusade and, worse still, several liberal activist groups had decided to start championing her cause.

She became the equivalent of one of those Olympic gymnasts who gets an endorsement deals, only instead of sneakers and PSAs for butt cancer, she was shilling for 100% total crazy. She is a disgrace to the anti-war movement and she has become its most vocal advocate.

Also,the cover of Cindy Sheehan's book makes me want to hit her with a shovel.

Here are the stories Cindy has never shared before about her own experiences at the center of a media firestorm, the life-altering events that were sparked by her simple act of defiance one hot August day in Texas. Going behind the headlines and sound bites, Cindy writes candidly about the toll her activism has taken on her own life and her family, as well the unforeseen rewards her quest for peace has brought.

Peace Mom, Jesus Christ. I wonder if she writes about getting a book deal from Simon and Schuster as one of the rewards her "quest for peace has brought".

Although, in the end I guess it works, because what could be a more terrifying prospect of a troop surge than 10,000 more Cindy Sheehans weeping and cawing into every microphone within a hundred miles? There is nothing. Nothing more terrifying.