Regarding the Unspeakable Evil of Mr. Stormbeard 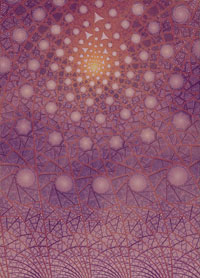 The sky over Shady Vale as it currently appears.I apologize if the tone of this letter seems harsh, but my family and I are presently trapped inside a trans-dimensional crystal with the neighbor from hell. That neighbor is none other than Langall Stormbeard, who resides at 2234 Roaring Elk Drive.

As I explained in my previous letter requesting immediate action, I had enlisted the aid of a Mr. Thecodont, a concerned resident from the nearby Enchanted Valley gated community. Mr. Thecodont, an old nemesis of Mr. Stormbeard, had been working on a magic crystal in his garage designed to imprison the Stormbeard family so as to protect this neighborhood and its residents.

Mr. Thecodont's plan backfired when Mr. Stormbeard's son Scott accidentally ran him over with his Honda Civic while he was in the midst of performing a powerful binding spell. The end result transported what's left of the neighborhood into the crystal Mr. Thecodont had built. Thank goodness Mr. Stormbeard's wife was out of town during this ordeal. One less Stormbeard to deal with is a godsend.

I think it goes without saying that I have been unable to drive to work during this time due to the impenetrable walls of the crystal. Communicating with the world outside seems impossible, so I have not been able to phone work and let them know of my situation. I've also been unable to get my Internet connection working, though that might be due to a virus or problems with the router.

I am not even sure that you will get this letter, as I have not seen the mailman in some time. I would complain about the lack of garbage pickup, except that the denizens of this strange crystalline reality regularly feed on it, leaving no trace behind. Thank heavens for small victories. I was worried that Beholder corpse in the street would rot for days.

During this crisis I have done my best to keep my lawn in compliance with the neighborhood charter -- a task I perform at great personal risk. The interior of this crystal is littered with demonic wraiths, living shadows, regular outbreaks of ball lightning and great fissures in the earth that open and close like the jaws of some great beast. My lawnmower was swallowed whole in one of these fissures, but I have been out there clipping the grass by hand with pruning shears. I don't care if I'm surrounded by chaos. I will not be the owner of an unkempt lawn.

I try to tend to the adjacent lawns for all the vacant houses as much as possible, but it's extremely dangerous to travel too far from home. I also suspect otherworldly demons may be taking up residence in some of them. I saw strange and garish lights emanating from Bruce Truespeed's former house. It's bad enough somebody is squatting there, but are they putting Christmas decorations up already? There's a clear window of opportunity for holiday decorations outlined in the charter!

I know Scott Stormbeard has been breaking into houses and smoking marijuana in them, but there are clearly more forces at play. In fact, I think even he's been staying close to home, probably on account of the giant living shadows that have been gobbling up the lesser imps and wraiths buzzing around.