HELLO!!!!!!! I don't know about you but I have been seeing a lot of elk on the road lately and a lot of signs about not hitting elk with your car. Personally I have a bad association with the elk that I'm not sure I ever told you about. You see, in my second grade class we had a field trip to a very old farm in town that still had a lot of the old equipment hanging around for people who wanted to see the world of old farms. Our class was small, only 8 or 9 kids including me, so they didn't give us the guided tour but instead we could just look at whatever we want, such as the old style milking machines that required the cow to chew on a small air bladder thing to pump its own milk (there is now a law against this), etc. 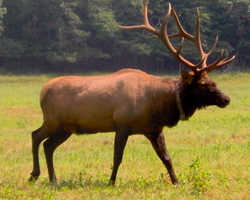 The Farm Leader gave us a map of the place and said "Have Fun Folks!" and cut us loose so we went to the barn first to see what was going on in the barn. On our way over there we were looking at all the farm stuff and got to the empty pig hole (Piggin' Hole) but there were no pigs in it. The teacher explained that oil had been bubbling up at the bottom of the pit so the farm man sold the pigs and was getting ready to sell the pig pit grease to make big money. "Look, Even Natures Creatures Want In On The Action..." she said and pointed over and an enormous elk with huge antlers was eating the greasy pig mud. The head farm guy came running out toward us shouting at it and the elk ran off to the top of a small hill "That Elk Gon Eat All My Profits" the grizzled man said and we all nodded

We started heading back to the main farm house because I think even the teacher had her fill of that place. It was a pretty good walk and it started to rain and thunder a little. Inside the house there wasn't much stuff to look at so even when something was only a little out of the ordinary the teacher made a big hoot about it. "Children, Look Here, This Is A Trundle Bed" the teacher was trying to explain why the farmer's 6 sons all slept in drawers without actually saying it because the farmer was in the room making a big fuss out of what everyone thought of his house. It started to thunder a lot harder and the teacher was having trouble finding new things to talk about even though it was only like 11 AM and we had been talking about a chair that looks like a big hand for like 25 minutes so we all started to head back toward the bus. I looked over to that hill the elk was on earlier and it was still standing in exactly the same spot even though the storm was bad. 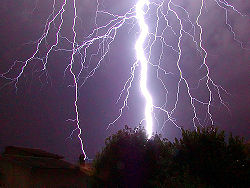 We got in the bus and heard two very loud thunder cracks, one about 3 seconds after the other one, and they sounded like they struck close. The driver got up into the driver's seat and said "Boy Howdy, Look At That" so all the kids ran to the left side of the bus just in time to see a smoldering elk staggering toward the bus making terrible screeches and groans "He Ate The Pig Grease, And Now He's Being Punished, Amen" is what a weird kid kept saying but everyone else was going wild because the smoking, greasy beast was leaning up against the side of the bus and trying to bump it and making a scream like it was saying "ELLLLLLLK, ELLLLLLLLLKK" which as we all know is not possible. The elk came around to the front of the bus and it was starting to get rowdy. The driver didn't know what to do other than honk the bus horn, which made the elk gallop off a little, and we had enough time to drive away while it found a place to lie down

THE HAPPIEST MAN IN TOWN!!!!