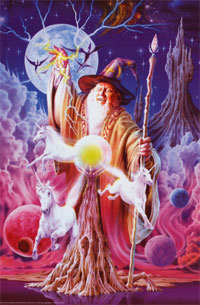 I believe you are well aware of my ill feelings toward Langall Stormbeard, who resides at 2234 Roaring Elk Drive, the residence immediately adjacent to mine. For the past year I have been writing to complain about his bizarre, troubling, and dangerous behavior. For the past year you have been ignoring me.

I believe that this letter and the attached petition signed by 12 other residents of the Shady Vale Neighborhood should serve as a wake-up call. If you do not act now, you risk losing your most respectable members. Now I realize that Mr. Stormbeard's magic may have blocked your eyes from seeing his yard, or he may in fact be controlling your minds, but I have to believe that somehow, someway, the rules that govern this neighborhood are stronger than any cheap magic trick. I have to believe you will see the light and listen to your residents.

The nuisance posed by Mr. Stormbeard has only gotten worse in the past year. Let me start with the recent events of Saturday, the 4th of April. This was the day Mr. Stormbeard's tinkering with the laws of nature resulted in gravity being reversed for a full fifteen minutes. That might not sound like a big deal, but many of my yard decorations -- all of which conformed with Shady Vale Neighborhood Association charter -- floated into outer space. When I complained to Mr. Stormbeard about this unnatural occurrence, he threatened to turn my arms into poisonous serpents so that I might forever be deprived of comfort and rest. Did I mention that his breath reeked of alcohol?

On the 10th of April, Mr. Stormbeard somehow angered a harpy brood. The sky above our community was nearly blacked out, so vast in number were the swarms of angry birdwomen circling above. All day and night the screamed and shrieked. I was so afraid of what they might do that I was unable to go outside and missed work. I couldn't even let my dogs out to do their business in the backyard.

A mere three days after that, he somehow transported the entire neighborhood to a parallel dimension. I go outside to get the paper, look up, and see volcanoes spewing hot magma into the blood red sky. He managed to transport us back the same day, but not before disrupting the normal neighborhood routine. As this was a Monday, it was also our garbage day. Naturally the garbage men do not regularly drive to parallel dimensions, and so we had to wait a full week for our trash to be collected. Of course this was of no consequence to Mr. Stormbeard, who still to this day burns his garbage in his backyard.

A week later, just as things were starting to settle down, Mr. Stormbeard once again agitated the forces of darkness. The skeleton hordes, who Mr. Stormbeard has had a continuing feud with, returned in force. Unlike last time, when their leader was courteous and polite, their new leader, one Mr. Marrow, was rude and maniacal, choosing to laugh at my complaints. These boney hoodlums congregated in my front yard, and again blocked my driveway with their catapult. 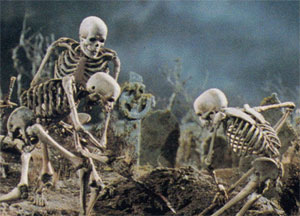 More skeleton mischief.Naturally, when Mr. Stormbeard finally emerged to address this disaster, he chose the most impractical solution. Using some kind of undeath spell, he restored them all to living flesh. This was of course a nightmare, since now I had between thirty and forty naked men standing in my yard, confused, frightened, and completely oblivious. When the police finally showed up, they accused me of hosting some sort of illicit sex party. To add insult to injury, they fined me for the catapult and charged me towing expenses. The indignity!

As if naked men weren't enough, I am regularly picking up debris that finds its way from Mr. Stormbeard's hideous yard into mine. Not a day goes by that I don't find magical orbs, glowing fragments of alien worlds and comets, strange skulls from unknown creatures, and empty bottles of vodka. Did I mention that Mr. Stormbeard is an alcoholic?