The Time to Evict Mr. Stormbeard is Now 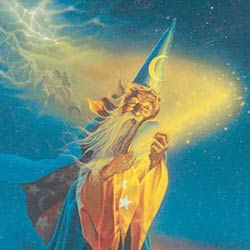 I have written you many times to complain about Mr. Stormbeard's unruly lawn and flagrant disregard for the neighborhood charter, a document I vowed to uphold at all costs. I must now inform you that this sacred document has been stained with blood. More on that in a minute.

Well guess what: Mr. Stormbeard is still at it. He has deviated so far from the rules upon which this community was built you'd think he was on a single-minded mission to destroy the entire Shady Vale Neighborhood Association.

We're trapped in an impenetrable crystal separated from the flow of time and space and overrun with every kind of demon and lesser imp imaginable, and Mr. Stormbeard still has the audacity to build a new garden shed without any permits or permissions whatsoever. When I moved in I read the bylaw limiting the number of external structures to one. I also read that any such structure must adhere to the strict aesthetic standards of the neighborhood.

Mr. Stormbeard's "shed" is a mess of gnarled wood barely holding together. Not even the most reprehensible of folk art can compare to this mangled disgrace. I yelled at him to tear it down, and he responded in typical Stormbeard fashion by giving me the middle finger.

As a side note, I should also mention that Mr. Stormbeard has put aluminum foil up in all the windows of his house, somehow making his horrible property an ever greater eyesore.

There have been some positive developments since my last letter of complaint. Since then the seemingly impenetrable supernatural crystal imprisoning the community has been thwarted. A few ungodly beasts managed to chew a small hole in the perimeter of the crystal, and I've been squeezing out of it every morning in order to go to work and buy supplies. I haven't told my wife, since I know she would leave in a heartbeat and never come back.

Count Thecodont, our wizard houseguest, has recovered from his injuries,and now spends the bulk of his time in a deep trance. According to him, he is traversing an ancient library that exists within the minds of all great mystics in search of a solution to the crystal problem. Hopefully he succeeds.

When he's not in a trance, he has taken to getting into loud arguments with Mr. Stormbeard. I have asked him to stop as I do not wish my yard to be home to such disruptive scenes, but he's stubborn in his ways. If he keeps it up I may have to ask him to leave, because I believe the Shady Vale Neighborhood Association would disapprove of such dramatics.

Speaking of the neighborhood, it hasn't been particularly safe. Granted, it was never very safe, what with all the skeleton legions, harpy broods, dragons, beholders, living shadows and violent weather, but now we've got a new problem: raccoons. I can guarantee you these little buggers are here because of Mr. Stormbeard. It's his fault such vermin would find haven in this community.

I'd call animal control, but I still don't have a working telephone, and I can't convince anybody to follow me into the glowing hole in the universe that leads back inside the crystal. I'm thinking of asking some of the skeletons to help with the coon problem, since they seem restless. A few of them have even started cleaning up the neighborhood a bit, though I fear that trend won't last.

Getting back to the root of the problem: I'm afraid I've reached a critical impasse with Mr. Stormbeard. I don't think we'll be able to have any further dialogue, as he is very sore with me. I delivered to Mr. Stormbeard an ultimatum: either he take control of his yard, or I will enforce the charter myself by any means necessary.

Of course he shrugged me off, and so I began reading aloud the words of the charter. This infuriated him enough to summon a terrible thunderstorm, but I was committed to reciting the entire charter, which I know by heart. I was unable to finish as he directed a powerful gust of wind in my direction, and I went flying back into my yard, along with a great deal of his lawn trash.

I'm not proud of what I did next. I grabbed one of my trusty golf clubs and returned to Mr. Stormbeard's yard. He was preoccupied with his new shed, and this allowed me to sneak up on him. I struck Mr. Stormbeard on the back of his head with a driver, knocking him to the ground.

Let me tell you I am deeply ashamed to have sullied our charter in such a way. That such a document should, even figuratively, be stained with blood is an outrage. However, know that I carried out these actions for one reason only: to enforce the charter.

Right or wrong, my attack was unsuccessful. Sure Mr. Stormbeard collapsed to the ground and seemed to dissolve into a million specks of light that swirled and scattered to the four winds, but he reformed mere seconds later. He was still the same curmudgeonly wizard, proudly displaying his middle finger in my face.

I've seen more than enough of that ghastly digit, all twisted and wrinkled and bony. Every time I see him he immediately hoists it up like a terrible flag protruding from that sagging wizard sleeve and leaves it on display until I am out of his sight. I know there aren't any children left in this neighborhood, but if there were and they were to see that, it would be an awful thing indeed.

Before I forget, I should also mention that Mr. Stormbeard has installed a new outdoor antenna of some sort. It's a gaudy thing, made of ornate metal with hundreds of rotating parts that towers over his yard. I'll admit the darn thing works, as I suddenly started receiving TV again. I guess I'm in range of the blasted contraption.

Unfortunately, he's got that thing tuned to some unholy frequency, because every channel is showing Martin Mull nonstop. I can't stand that man and I didn't know he has a body of work extensive enough to fill a hundred channels, let alone one. Mr.

Thecodont suggested that Mr. Stormbeard imprisoned the essence of Martin Mull in his antenna device, not that it matters. I can't stand the TV now. It's like eating rye bread all the time, only with my eyes.

I realize that the Shady Vale Neighborhood Association has filed for bankruptcy since the community disappeared off the face of the earth, but I'm still fighting to keep the dream alive. I ask all of you serving on the board of directors to take back your neighborhood. The fact that I'm still standing for this charter is a testament to the strength of Shady Vale and its immaculately written charter. We've got to restore this neighborhood to dignity, and we can start by finally evicting Mr. Stormbeard!

Thank you for your time.