My Life is a Lie! 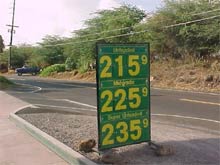 If Uber Grandpa is to be believed, blame high prices on Saddam and the Jews.Nothing funny ever actually happens to me any more. I can force funny things to occur, play the fool and make my life surreal and amusing, but random occurrences of humor are very rare. That is why yesterday was a day to be celebrated.

I was at the local shitty small grocery store (we have three of these and one large and shitty grocery store) buying some essentials like Water Joe, Vivarin and the components I need for my kitchen meth lab. I am on a quest to stay awake as much as possible until I die from that horrible sleeping disorder I saw on an episode of Star Trek: The Next Generation where the guy who played Gurney in Dune was tossing and turning and not getting enough sleep and he began to see goblins and the goblins could actually kill him, because if you die in the matrix you die for real. But I digress. I went up to the cash register and there was one man in line ahead of me. I glanced at him and immediately was struck with terror, were the Gurney goblins already manifesting?

No, I am not so lucky. The man in line in front of me was probably about 6' 10" tall, at least half a foot taller than me anyway. He was pale white with rubbery, almost moist, skin. He was wearing a hat that said "#1 Grandpa" on it and a pair of blue overalls with no shirt on underneath them. His sagging man-breasts barely covered by the faded denim straps, he was engaging the young buck-toothed cashier in a conversation about the price of gasoline being outrageous. This is a common conversation at cash registers in Ohio because apparently people drink gasoline here to survive. Not surprisingly this odd fellow had a unique take on the situation.

Cashier: uhhhhhh (nods and rings up his package of sow fritters)

Monstrous Half-Naked #1 Grandpa: Prices only go up in summer because it is winter in Iraq and they need to pay for the heat.

Cashier: mmmmmm (actually closes mouth, nods and rings up the 90 pounds of rutabagas he has shoved into a laundry sack)

This continued until the slow-witted girl running the register had finished ringing up and bagging all of his mayonnaise, curious old people medicated ointments and various low grade animal parts. To summarize his theory, first gas prices would reach ten dollars because of summer, and then they would proceed to double because of the Jews. He offered as evidence the existence of Saddam Hussein and the fact that apparently no Jewish people live in my town. I don't know about you, but I don't think I could spot a Jewish person unless they were trying really hard to be spotted. For all I know my parents and friends are Jewish. If there really aren't any Jewish people in my home town, I think it might have something to do with the pasty, lumbering gentiles who declare themselves with message hats to be racially superior grandfathers.

Set the Wayback Machine to 1985 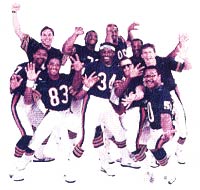 Thinking back to the mid-eighties is going to get more and more clichéd as the years go by, so I would like to take this opportunity to rip off X-Entertainment and remember with mixed reverence and disgust, a pop-culture event of my childhood. Okay, I don't even really know the meaning of the word reverence, so let me give it to you straight: I am going to make fun of the Super Bowl Shuffle until the people responsible for it are attacked by indignant Apache braves.

I had the incredible misfortune of living in Illinois in 1985, Champaign/Urbana to be exact, and consequently I suffered through the most ridiculous sports craze in the history of the United States. This was of course the Super Bowl Shuffle, a concept so horrid that it makes the WWF's "drop Owen Hart on his silly head" stunt look like the greatest idea since Ju-Ju coins. "But it didn't result in any deaths," you say. Au contraire, over 200 suicides in the Chicago area alone were attributed to repeat viewings of the video of the Super Bowl Shuffle, the magnum opus of the Shufflin' Crew.

Half time! Let's take a peak at some of the Shufflin' Crew/annoying '85 Bears Lineup. Yes, they were talented football players, some of the best in fact, but for the love of fuck they still should be beaten mercilessly.

Walter "Sweetness" Payton
Attitude: Payton is a smooth operator, he runs the ball "like makin' romance" and invariably makes all the ladies swoon. He enjoys wearing headbands, which either symbolize romance or mark him as a retarded Kamikaze pilot.
Best Line: And we're not doing this because we're greedy.The Bears are doin' it to feed the needy.
Fun Fact: Payton's debonair persona, as put forth in the gripping lyrics of "The Super Bowl Shuffle", does not come off very well if you meet him in person. He smells like burning tires.

Willie "Speedy Willie" Gault
Attitude: Speedy Willie is a hard working athlete who is dedicated to his sport, but he also knows how to have a good time, as evidenced by his line "I practice all day and dance all night"
Best Line: Now I'm smooth as a chocolate swirl,I dance a little funky, so watch me girl.
Fun Fact: Gault proved what a hard worker he is after being sentenced to ten years of hard labor in Georgia. His best line proved eerily prescient, as he was arrested for masturbating in front of a classroom at the Macon Girl's School for the Deaf.

Mike "Samurai Mike" Singletary
Attitude: With his zen-like fixation on defense, Singletary is willing to extend his zone of protection not just to the defensive line, but also to "[his] neighborhood". He also looks like a complete moron.
Best Line: Give me a chance , I'll rock you good,Nobody messin' in my neighborhood.
Fun Fact: During Super Bowl XX, Samurai Mike emerged from the locker room at half time in full Japanese samurai armor. He eviscerated three members of the Patriots with a katana and his number was subsequently retired out of honor.

Jim "Punky QB" McMahon
Attitude: Wild and unruly, the Punky QB embodies the heart of chaos that beats at the center of the '85 Bears. Being the QB he also serves as the team's leader on the field, and McMahon describes his attitude in this realm best when he sings "I motivate the cats, I like to tease."
Best Line: I'm the punky QB, known as McMahon.When I hit the turf, I've got no plan.
Fun Fact: McMahon continued to motivate cats off the field with his brief career as a trainer for neglected zoo tigers. Unfortunately, the Punky QB's inability to plan stayed with him as well. After a night of being accidentally locked in a cage with an underfed tiger, all that remained was his left leg.

William "Fridge" Perry
Attitude: The new guy on the field, rookie Perry has a lot to prove. He invites his team mates to watch him dance and take his incredible soft-shoe routine to heart. He displays incredible arrogance for someone new to the Bears, but he has deeply believes in himself and has the raw talent to cover for his big mouth.
Best Line: You've seen me hit, you've seen me run.When I kick and pass, we'll have more fun.
Fun Fact: In 1996 Perry lost a lawsuit brought against him by the Frigidaire corporation and was forced to pay millions in royalties for his "unauthorized association with the fine products of Frigidaire." Rather than pay the royalties, Perry chose to eat the entire board of directors at Frigidaire.

Rather than force you poor people to download the original, I asked my good friend Taco the Wonder Dog to offer up a remix of the classic Super Bowl Shuffle. I would have to say that after listening to both versions, his is infinitely more palatable. If you really insist on hearing the original it is dismayingly easy to find on Napster, look it up, I sure as hell am not going to spread that garbage around.