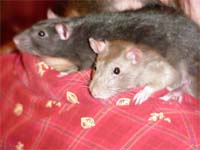 "Welcome to your new home Richard. We like it when you eat the crackers!"Lowtax called me seven times while I was out at the grocery store, I could tell because "SLUT" kept flashing on my caller ID. When I was putting the last container of technical animal fat into the cabinet, the phone rang again. Sure enough, my caller ID said "SLUT" and I knew it had to be him. Not wanting to disappoint the hot-tempered R-Lo I did something unusual and answered my phone.

Lowtax: Very good of you to answer Mr. Parsons, where were you for the last hour? I WILL LEAVE YOU BLEEDING IN AN ALLEY IF YOU EVER IGNORE MY CALLS AGAIN!

Zack: How is the apartment search going?

Lowtax: Great! I found a 1500 square foot loft downtown for less than a thousand dollars a month. The realty agent said it was thought to be haunted, but when I looked at the place it was just haunted with thousands of rats. You know how I love rats!

Zack: I think one time when you were drunk you mentioned that your favorite character on Teenage Mutant Ninja Turtles was Splinter.

Lowtax: WATCH YOUR GODDAMN MOUTH WITH ME!

Actually Lowtax didn't call me. He never calls me. I sit by the phone waiting for him, holding my knees to my chest and rocking, just softly crying to myself. Oh god, why does he make me keep waiting?! 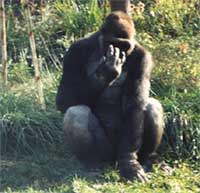 I want a banana this, let me out of my cage that, just shut your hands Koko!I am fascinated by the continuing research in the field of human/animal communication. The imaginary timeline in my skull tells me that it all started with that Koko gorilla that had a thing for kittens and continued with teaching dolphins to communicate by slamming their faces against underwater signs. Nowadays several gorillas can speak something like 200 words using sign language, which is more than most people in my hometown can manage using English.

Laying alone and hated in my bed at night as is my usual operating procedure, I began to contemplate the actual value of this research. It is interesting that gorillas and dolphins are smart enough to learn how to communicate with us, but what do they really have to say that is worth hearing? How many times is it going to be gripping to see the dolphin smash its nose against the icon for fish when you know the goddamn dolphin always wants fish? I don't really think it will be quite as amazing the five-hundredth time that gorilla decides to tell the scientist it just wants to leave the cage. Shut up Koko! Cage is all you're getting.

Before I completely gave up on the whole talking animals being valuable research bit I decided to put it to the experts. I asked them what different types of animals are saying and I got some surprising and some not so surprising answers.

Gorillas: While gorillas do spend a lot of time talking about bananas and being allowed to roam free, they also like to talk sports, baseball in particular. Gorillas are huge McGwire fans, often comparing his upper arms to the trees of the rainforest from which they were forcibly removed.

Horses: They have managed to acquire a considerable vocabulary but no matter how many words they learn, horses only say "I hate you" over and over again.

Squirrels: A newcomer to the realm of animal/human communication, the squirrel has proven to be a quick study. By scratching on various symbols the squirrel has managed to learn and express some ninety-words. The squirrel asks for nuts and berries frequently and has a poor attention span. Interestingly enough, squirrels also often mention that they find black women attractive. 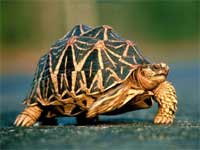 Those turtles sure have some sassy mouths.Turtles: The pariah of animal communication science, the age of advancing human/turtle interaction came to a final conclusion in 1998, when it was realized that they refused to learn anything but swear words. Once learned, turtles would repeat a single phrase like "shitfucking balleaters" until they literally died from starvation.

Tigers: These noble predators quickly assimilated words and phrases for various prey animals into their vocabulary. Beyond this, however, the only thing they have learned is to express a demand for crack cocaine. This is usually achieved by stepping on the word panels for crack and cocaine and then biting the trainer in the head repeatedly.

Overall the results seem mixed and my disappointment is certainly immense over the cancellation of the swearing turtle project. I think research money should be diverted from teaching some of these animals to communicate and reassigned to teaching my next door neighbors how to speak a complete sentence without spitting mashed potatoes. Although maybe they could make "retarded hippos" their next research project and I'll just knock my neighbors out with ether and sneak them to the test site.