Cliff Yablonski Teaches You How to Make a Gas Station Key!

Wake the fuck up, you dumb shits 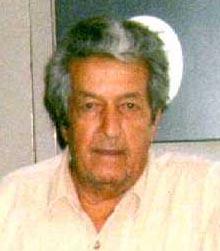 Howdy, meatballs. It's me, Cliff Yablonski. I'd say it's nice to be with you again but it fucking isn't. I hate all of you and would happily see you dead. I'm updating Richard's dumb inter-net site because he's busy moving to Seattle or Hawaii or Singapore or somewhere. I don't care as long as it's far away from here. Anyway I don't know shit about hmtl or whatever and I don't want to. If the writing turns out bright pink or something don't email me complaining about it because I don't care. More on that later. Last year this kid kept coming by my house dropping the same goddamn letter into my mailbox every week. After about 6 weeks I hid in the bushes and waited for him and when he came by I jumped out and smacked him around the head with a trowel and told him to stop fucking filling my mailbox with the same shit week after week. He started blubbering and telling me some crap about how it was a request form for donations to some disabled kids charity, so I shoved him into Bill Langley's rose bushes and went back inside to watch TV. That dumbass kid was still stuck in those bushes the next morning and after they cut him free he had to have over 130 individual thorns surgically removed from his flesh. Bill Langley told me that. He was fucking pissed about the ambulance guys cutting down his rose bushes though. Funniest shit ever.

Yes, whoopee fucking doo, I updated my goddamn site you shit-eating morons. So stop sending me your fucking lame-ass e-mails before I come to your houses and smash all the fucking plates in your kitchens over your fat heads. OK? Don't think I'm joking because I have had enough of your digitised shit in my e-mail box thing. And the glasses too.

The reason I didn't update my site on Monday was because I got stuck at the fucking gas station 4 miles out of town. A couple of years back I bought this piece of shit Chrysler from this Chinese bastard a few blocks down. Fucker ripped me off $9000 for that rusty pile of debris. I can't even remember why the fuck I bought the damn thing at the time. I was probably drunk. Anyway Monday morning I decide to head out to the big gardening store over in Corgettesville or whatever the fuck that place is about 50 miles up the interstate highway. You know, that dustbowl of a town with the shit-ugly blue church. I wanted to go to the gardening store so I could find some shit to make my bushes stop dying all the time. Personally I'd like to surround the whole fucking garden with razor wire, but last time I did that the cops came and took it down.

So I set off and everything is just fucking peachy until I leave the city limits and then the engine starts making this godawful chugging sound like there's a fucking freight train running under the hood. I ignored it for a while but it just got worse. Then I saw I was out of gas and remembered that I'd meant to fill her up last week after I emptied the tank chasing that fucking hobo down Main Street at 2am. There was a gas station a couple of miles up the road so I wasn't worried, I just kept going and coasted the last few hundred yards to the station. Sadly the steering gave out just as I was turning in and I knocked the stupid gas station sign over and I think I might have run over a cat or something too. I swear it was the steering anyway.

So there I am and some greaseball kid in an overall comes over and I tell him to push the car over to the pump and fill her up. Well we get as far as the pump and then this fuckface starts yanking at the gas nozzle and it won't come out the slot thing on the pump. After about 10 minutes I think "fuck this stupid little shit" and I get out and try to get the gas nozzle out myself, but the fucking thing is stuck after all, so it wasn't just that the kid was a pissweak little retard. Which he was anyway. By this point I'm getting fairly pissed about the whole fucking show and I tried kicking the pump and throwing a trash can at it but the nozzle still won't budge. So I tell Greasy Joe to go get the manager or a mechanic or someone to fix the goddamn pump. The kid wanders off and I hang around, naturally expecting him to be back pretty soon with someone who wasn't a total fucking jackwad. Of course I should have known better. FIVE FUCKING HOURS I was sitting in my car at that fucking shithouse gas station while I wait for Greasy Joe to come back and just FILL UP MY GODDAMN CAR. Although after about an hour I fell asleep anyway and when I woke up it was getting dark and that slimy little grabass still hasn't showed. I was just about ready to start looking for the nearest payphone when this fat redneck slob pulls up in a pickup truck and just walks over to the fucking pump and lifts the goddamn fucking gas nozzle out just like that. I mean WHAT THE FUCK. I was so fucking pissed I walked over and punched him in the back of the head and then he fell over and I smacked him with the gas nozzle and jumped up and down on his back until he stopped moving. Bastard fucking piece of shit. Anyway then I filled my car up and drove over the fucking gas pump and hightailed it out of there in case the big gas tank blew up. I don't think it did though because I waited about a mile away for nearly half an hour and didn't see any explosions or shit. Fucking typical. Then I drove home and got fucking shitfaced on Jack Daniels and I threw up out of my bedroom window onto the fucking bushes. Goddamn stupidest shit ever, I tell you.

So don't get pissy and start screaming like a retarded schoolgirl just because I didn't have time to update my page with all the fucking stupid shit going on that day. I mean what in the fucking hell, don't you dorks have anything better to do than send me email messages whining about how I didn't update my site this monday? It's MY FUCKING SITE you zitfaced clowns, I'll update it when I FUCKING FEEL LIKE IT. I've got better things to do with my time than slave away just so some four-eyed freak who spends 16 hours a day playing "Counter-Nuke" or whatever can be reassured that there really are people more ugly and loathsome than he is. I FUCKING HATE EMAIL NOW STOP SENDING ME IT. Anyway go to my inter-net and read my latest update, then maybe you can stop shitting your pants for long enough to go outside and look for a fucking job. You goddamn pusball.

DIY Special: How to make a key tied to a block of wood

Tired of dopeheads stealing the key to the restroom so they can break in and do crack and meth and shit in there? Tie your valuable key to a big fucking block of wood so nobody can use it without making enough noise to wake the dead. In this fast and easy 5-step guide by me, Cliff Yablonski, I'll show you how to do just that. Although the only reason I'm imparting this knowledge to a flaming grabass like you is because it's simply too goddamn brilliant to remain a secret any longer. Pay attention, because you're all fucking stupid and you'll probably fuck it up anyway. 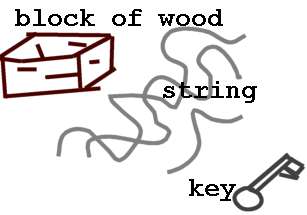 Step 1. This is the shit you'll need to make your own key tied to a block of wood. You'll also need a hammer and a nail, but you'll probably have to ask one of your parents/minders/cell block wardens for those. It doesn't matter what kind of wood the block's made from or how big it is as long as it's motherfucking heavy. Not too heavy though, or you won't be able to lift it yourself, you imbecile. Same shit goes for the string, you can use rope or chain or something if you want, but I don't advise deviating from these guidelines too much or you'll most likely make a fucking mess and put yourself in hospital. Not that I would care, you worthless piece of shit. 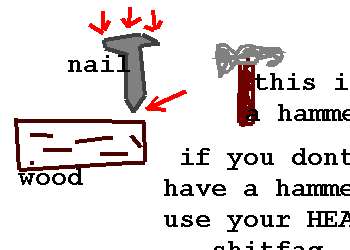 Step 2. This is where the operation becomes more difficult. Are you ready? OK, here we go. Take your nail and place it so that the pointed end rests against the top of the block of wood. With me so far? Then take your other hand out of whatever disgusting place you had it and grasp your hammer firmly. Now, the trick is to hit the flat part of the nail with the flat part of the hammer, thus driving it into the wood. If you can't work out which is the flat part of the hammer, use your fucking head to smack the nail with, because god knows it's dense enough. Leave an inch or so of the nail clear of the wood, for reasons which will soon be detailed. If you don't leave enough of the nail clear you are a fucking retard and deserve to die. 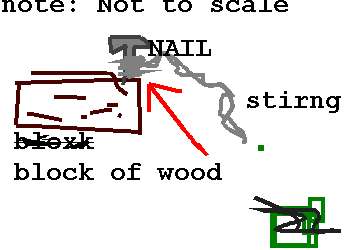 Step 3. Finished with the hammer? Now you're really cooking with gas! OK, now take your string and tie one (1) end of it around the part of the nail which you left clear of the block of wood. NOTE: DO NOT tie more than one end of the string to the nail or the finished key tied to a block of wood won't work. If you are a paraplegic cripple, and I know many of you are, get someone else to tie the string. For the rest of you, here's a hint: you will know the string is tied properly if it doesn't come off when you pull it. 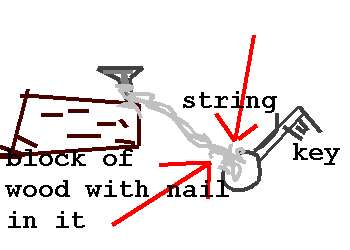 Step 4. By now you may have noticed that you still have one end of the string which isn't tied to anything. This is where the key comes in. Take your key and repeat the "tying" procedure described above, except that you are now tying the other end of the string to the key. Sometimes you may find that there is no place on the key to which to attach the piece of string. This is because you are a fucking idiot and picked the wrong kind of key, so you can die. 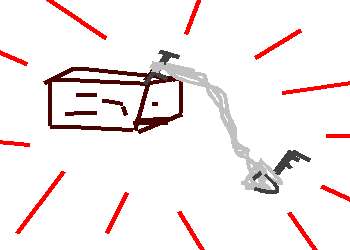 Step 5. You're all done! You now have your very own key tied to a block of wood. Not only does this ingenious device prevent hoodlums and commies from stealing your key, it can also be used as a more direct means of self-defense by hitting your assailant with the big block of wood. I am personally never without mine, and it comes in very handy if there are too many people in the supermarket check-out line or some punk-ass kid is getting too close to my car.


PS. The key tied to a block of wood is not patented because I don't have that kind of money lying around and I'm not some goddamn nerd scientist with a hardon for microchips. However if you use it without crediting me I'll find you and break your fucking face.That's it for today, turdjugglers. Screw off.