Signs of the Apocalypse for April, 2006 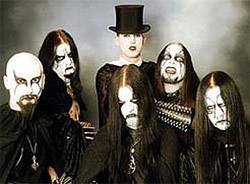 Not every religion and ideology believes in an apocalypse, but all of the good ones do. It's just good horse sense. Whatever has a beginning has to have an end and you can view Armageddon, the Final Battle, Judgment Day, the Rise of the Machines or whatever else you want to call it as the M. Night Shyamalan twist ending to mankind. Like when it turned out Bruce Willis was a ghost or when aliens turned out to be retarded. Even atheists are constantly predicting some peak oil catastrophe or bird flu outbreak that will allow them to live out their fantasies of being stuffed and mounted in the bunker of a post-apocalyptic right wing militia leader.

I scour the news wires every day looking for stories that can serve as signs of the apocalypse. Today, for the first time, I bring you irrefutable evidence that the End is getting fairly Nigh.

Love Drunk off My Mumps

When it comes to ill-remembered and amusingly-named diseases of yesteryear mumps stands side by side with luminaries such as whooping cough and polio. While tuberculosis is enjoying something of a comeback in urban areas, it's mumps that is spreading like wildfire throughout the Midwest. Epidemics are big things when it comes to apocalypse tidings, but mumps isn't that bad because it rarely causes severe harm in young children. It can render older children, teenagers and even adults sterile. There is also a chance that mumps, like every disease including hay fever, will kill the elderly. When old people die because of colds and heat waves I think you can chalk that one up to them being old people. Honestly, CDC, don't shoot the messenger!

(1 out of 7 unsealed and poured out vials)

Aruba's coast guard is finally giving up the search for missing and presumed dead teenager Natalee Holloway. That means the media frenzy over her disappearing and presumed dead act will probably die down. So what does that have to do with the apocalypse? The people enthralled by the Natalee Holloway case are possibly the stupidest segment of people on earth, with the exception of those guys in England who record happy slaps on their cell phones. When the stupidest people on earth suddenly have no white girl epic to keep their ears glued to the dulcet tones of Rita Cosby they're going to start looking for something else to do. This "something else" might include voting in upcoming elections. When the stupidest people vote en masse then really stupid things tend to happen, like an apocalypse.

(3 out of 7 unsealed and poured out vials)

Downsizing at the Diocese 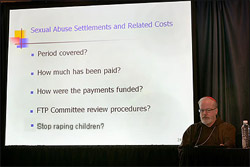 Next slide please, Father.Many non-Catholics would argue that the litany of sexual abuse charges leveled at members of the Catholic Church are an indication that the organization has been infiltrated by Old Scratch himself. A good indication that the Catholic Church remains largely Satan free: it's broke. Cardinal Sean P. O'Malley of the Archdiocese of Boston gave a Power Point presentation on the fact that earnings are down and expenses are up at the infamously money-hungry church. Sean P. O'Malley - who might as well be named "Priesty O'Catholic" - has promised to compensate for a 46 million dollar budget shortfall by laying off more employees and tightening the purse strings.

"Sorry, Father, but we're going to have to put off encrusting your cathedral in another layer of gargoyles and stained glass for this fiscal year. Oh, and unless the nuns are willing to forego their free room and board deal then they've got to go."

Satan may not hold sway over the Catholic Church, but he's obviously winning some sort of battle against it. With no money to spend in the eternal struggle against the Beast, what weapons can the Catholics hope to wield against Satan? We'll just have to pray that they find some spare change in the giant Pope couch.

(4 out of 7 unsealed and poured out vials)

Drilling Our Way to Satan

Meddlesome scientists claimed to be pursuing knowledge rather than the chthonian layer of the Unlord when they drilled nearly one and a half kilometers beneath the ocean floor. What they found down there was a "fossilized magma chamber" instead of the Beast they were secretly seeking. I'm not sure how a rock can become fossilized, but what I am sure of is that drilling deeper than oil is dangerous. I would have told people not to even drill as deep as oil if at all possible, but I wasn't around when they first started doing that.

Whether or not deep oil wells have unleashed Satan on our world is open to debate by the wisest scholars of the Bible and also Weekly World News, but this deep drilling for no good reason has got to stop. We can't just rove around all willy-nilly and drop a drill miles underground wherever we please. Even if the devil is deeper than our drills could ever reach there's got to be something bad down there like Morloks or CHUDs or something. Having those cats out and about is not going to slow down our careening rollercoaster ride towards the Final Battle.

(5 out of 7 unsealed and poured out vials)

The Blackest Day in Racing

There can be no doubt that the black athlete is physically superior to the white athlete. We rely on our shrewd Caucasian intellect to excel while they are possessed with the fury and savage drive of a wild animal. They transformed basketball from the sport of kings to the sport of posturing hooligans. They sullied the good name of baseball with their Bo Jackson this and their Don Mattingly that (he counts, he was half black Irish). Golf has been forever ruined by hip-hop personalities like Tiger Woods, with his beastly prowess and "urban" sweater vests. They have even destroyed the good name of La Crosse with their Nubian temptresses.

I knew the time would come, but it still pains me to say that they have taken our final redoubt. They are taking over NASCAR.

In an effort to out-white white people, Tiger Woods has jumped ship from golf to stock car racing. Technically it isn't NASCAR, it's just some one-off charity event in some tiny country no one has ever heard of before, but it still counts. What's next, is he going to start a website or maybe murder and eat some guy he meets on Craig's List? As a proud white person I have to beg all of our black readers: please, leave us something. Anything. Leave us Soduko or spelling bees. Let us have a scrap of a chance. Let us have our dignity!

Ahem. What does this have to do with the apocalypse? Simple. The apocalypse will be started by white people and Middle Eastern Muslims. Look it up, it's in the Bible somewhere. If white people can't be competitive in sports then they're going to be constantly cranky. Middle Eastern Muslims are already constantly cranky. An increase in global crankiness among one of the two doomsday factions will definitely hasten the coming of the apocalypse.

(3 out of 7 unsealed and poured out vials)

I hope you have enjoyed this brief tour of the harbingers of the End Times. If you would like to read more on this subject then you can send a self-addressed stamped envelope to:

The newsletter goes out one every three months or whenever I compile a long enough list of portents of calamity to merit a new edition, whichever comes first. At the current rate you should anticipate a new edition in the next 48 hours.