Are you sick and tired of slickly presented professional women's wrestling? Then check out Sleeperkid's World, where you can enjoy all the creepy sadomasochistic fetishism without any of the athletic talent or production values!

On the landing page, our humble host "Sleeperkid" makes a simple, principled promise: "This is a wrestling fansite. It has never been and will never be pay-for-view in any way." The very next page features prominent promotion for... his pay-per-view site. Zuh??

The main site looks ridiculously outdated (be sure to chat with Sleeperkid on Yahoo Messenger!) and most of the fights apparently take place on a mat set up in somebody's bedroom. Most of the video has migrated to the PPV site, which makes it hard to get a feel for the content, but freeloaders can still check out the extensive image galleries and roster to get a taste of that sweet, sweaty wrestling action.

Now, you might think that because of all the bikinis and a prominent photo of a scantily-clad wrestler being humiliated with a white, creamy substance on her face, this content might be considered somewhat sexual. That is, if you're a grade-A moron! First of all, it's yogurt, as you'd know if you'd bothered to browse through the photo gallery, and second of all, Sleeperkid has some choice words for you:

If you think non-erotic and non-nude pro wrestling/fantasy combat is "freaky", then you've obviously never seen anything online outside of disney.com.

Go play a freaking Mickey Mouse flash game, ya perv. There's nothing weird about videotaping your female friends while they pretend-fight with each other in your house. In fact, what makes Sleeperkid's World different from the other, lewder underground wrestling organizations is Sleeperkid's priority on "storytelling." Here's an example: 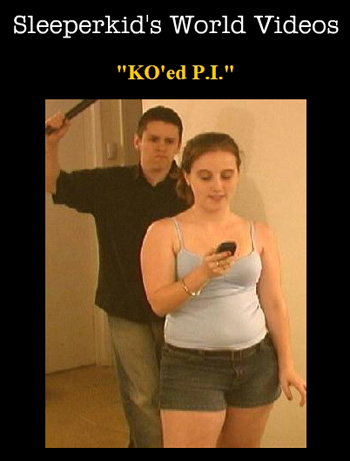 P.I. Kaila starts out pretty confident, discussing the results of her latest caper with her boss, and gloating over her skills and accomplishments. She's stolen an important disc from Sleeperkid, who's already made her way into her apartment!

This one is a blast, folks, and fans of KOs, eye-rolling, chloro, and all things sleepy are bound to love the constant knockout torture that this porr private eye has to endure. Kaila does her best, trying to evade Sleeperkid's attacks, but when the man has a blackjack at his disposal and a bottle of Knockout Gas in his posession, avoiding a knockout destruction is definitely a mission impossible!

Speaking of which... you may be able to avoid Sleeperkid's flying fists, but no one can withstand his devastating sarcasm:

QUESTION 7: Hey Sleeperkid, I'm an insensitive douchebag with a tiny penis, can I post insulting messages and/or spam on your messageboards and yahoo groups?

Sleeperkid says: Sure, go ahead. Just expect to be deleted and banned within minutes of your post, giving you enough time that day to move out of your mom's basement.