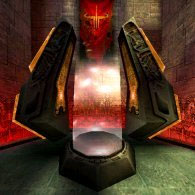 This teleporter was probably intended to transport school children to popular field trip destinations, now it transports the souls of the damned!It is a reoccurring theme of science fiction and fantasy to look towards teleportation as the ideal means of quick transportation. It's not hard to see why, either. Each day we spend a considerable amount of our time just traveling from location to location. All this traveling eventually eats away at our lives like a giant dinosaur. Yeah, I know dinosaurs are already gigantic, but I'm talking like a really, really big dinosaur, the kind of dinosaur that could easily level Tokyo in a visceral skyscraper-humping rampage. I think the point I was trying to make, besides the fact that dinosaurs kick ass, is that we spend a lot of our lives just traveling. When consumer space travel becomes possible, the amount of time we spend traveling is only going to increase tenfold. Thusly, it's inevitable that before long, the matter teleportation capabilities of teleporters becomes a realistic goal for obsessive scientists, evil corporations, and evil obsessive scientists who either own stock in evil corporations or are employed by evil corporations.

The initial benefits of teleporting from one location to another near-instantly sound wonderful. Imagine the prospects of being able to visit your family halfway across the country and return home on the same day! No longer would we be confined to congested roads or the troubled airline industry. We'd just walk into the transporter, which would probably look like an art deco outhouse lined with tubes, switches, and knobs. Then presto, we're wherever the hell we're supposed to be. No more breakneck traffic or sitting behind the wheel of a car or gagging on peanuts in an airplane. And hey, it's probably a lot harder to hijack a transporter!

Then of course the lack of busy roads means less pollution! While less pollution is sure to depress the despicable eco-villains who, in-between drowning babies and purposely crashing oil tankers into orphanages and zoos, run all the big corporations in the world. For the rest of us, it means air slightly less dirty than before. If we spend less time choking, we can spend more time not choking! It also decreases the amount of drunk driving, because no one will be driving! On the downside, Fox would have far less police chase shows to air and actually have to focus on finding new shows to air once and then cancel.

Another amazing benefit would be that the geographic and cultural walls that separate the world would collapse like a folding chair, which we could then put in a closet for easy storage or use as a weapon to assist in scoring a quick three count. No longer will distance separate us! Culture will seep out of the transporters like sweat out of the average obese American! And that sweat will act as a lubricant for the massive transporter-inspired renaissance. Unlike previous renaissances, which were about gaying up art and daily living, this one will be more about sending random objects to distant locations for the giddy thrill. Of course the coolest part is definitely that you'd be able to teleport food directly into your stomach, bypassing mechanical digestion! Now that's efficiency!

Yes, teleportation is the answer to all of our problems! Or is it? You would think so, but then you would be thinking wrong like I was throughout the entirety of that last few paragraphs. Suck down that plot twist, cornbag! Unfortunately for us, teleportation is high in dangerium, the element of danger! It would be okay if all it was is that occasionally your luggage ends up on Jupiter while you end up on Europa, because that's really not that big a deal. The problem is, you and your luggage would likely get transported to Hell, a hostile alien dimension, or an alternately reality where things are never as they seem! Or worse, you and your luggage could be combined into some kind of diabolical suitcase monster that preys on naked women as they shower. Kind of like me, but with that whole being half-luggage part. The unwanted results would likely vary every time, but the consequences would always be the same: pants pissing catastrophic. That is if your pants even end up in the same dimension as your body! If not, good luck weaseling your way out of that mess!

The most obvious problems with transporters are pretty obvious, which is why I called them obvious twice and then went ahead and used the word obvious a third and fourth time in the same sentence for no good reason. I've taken the liberty of following that nightmare of a sentence up with this bulleted list! Put on your Kevlar, because these hot bullets are coming right at you! 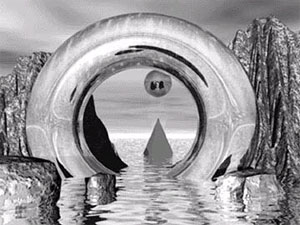 This gateway could just as easily serve as a conduit for evil aliens. And not the good kind of evil aliens, either.

Opening a Gateway to Hell
The last thing anyone wants is for some bozo scientist to accidentally open a gateway to the netherworld, subsequently causing our reality to be overrun by demonic monstrosities. I don't mind being devoured by a demon, as long as it's at least a frightening demon. My worst fear is that we'll find out that Hell will be full of the bastard children of a Paul Anderson, Todd McFarlane, and John Carpenter three-way. Basically, muscular goth clowns that look slightly more scary than KISS, but slightly less scary than Richard Simmons after a hard day's work of wrangling fat people.

Opening Gateways to Evil Alien Worlds
The various god-like alien overlords of the galaxy get seriously pissed when races like ours decide to open gateways to their worlds. In fact, most of them are just waiting for us to do something like that so they can send in their minions and wipe us out. This is not unlike how Scientologists will send their minions in to wipe out your bank account. Only the alien version is more pleasant and not as embarrassing for everyone involved. Plus there's a good chance lasers are involved, so that's always cool. Still, it's a tough blow for humanity!

Opening a Gateway to an Alternate Reality
The more subtle of dire consequences would have to be accidentally channeling an alternate version of our own reality. It might look similar, but those tiny differences will be a major kick in the kneecaps. It might be something as simple as everyone in the alternate world has a goatee and acts like a total bastard, but it could be something even more begrudging like where all the alternate humans speak in invisible bands of radiation that melt our brains. Damn alternate reality scum.

Dual Occupancy of Time and Space
Assuming transporters do not in fact open up a trans-dimensional rift with some kind of hostile environment, we can at least count on the fact we'll still have other annoying problems. What's to stop someone from transporting a brick to the same location your head is occupying? Or someone jumping through a transporter and rematerializing in the same location as someone else? These kind of shenanigans are just the type of thing that could bring the world to its stubs that are all that's left from where the knees should be, only they're not because of a horrible accident. It would be especially annoying if some wise guy gets a notion to transport bombs into our country! The world is full of scoundrels and giving them access to transporters is only going to make matters worse.

I think it's pretty safe to say that the benefits matter transportation devices have to offer aren't worth the world-shattering side effects. Unless we all want to die in a fun and experimental way, in which case it's pretty cool. Not as cool as dinosaurs, but then not much is. It's clear that there are far more important things for our scientific community to focus on, like cloning Hitler or combining the DNA of every major serial killer in the last hundred years into one vicious monster and then letting him loose in a crowded summer camp to study the results. Things like that have far more safe and practical applications, at least. If you're concerned about transporters becoming a reality, I strongly suggest you write a letter to my good buddy Norman Y. Mineta, the United States Secretary of Transportation. When it comes to handling matters of transportation, he's the freaking Last Son of Krypton. If anyone can stop the world from being devoured by ungodly demons, it's Norman Y. Mineta!