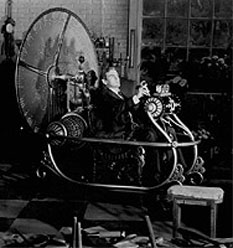 Sure, you could go for something fancy like that, but all it really takes is a full bladder, some cups, and a dream.A long time ago, like before people drove cars and they drove "horseless steam contraptions" that "rode the rails", a little man named H.G. Wells wrote a little book entitled "The Time Machine". He also wrote a lot of other books about a variety of other subjects ranging from Martians shooting heat rays at people to books about everyone on earth being replaced with animatrons from various Walt Disney attractions. We'll not concern ourselves with these other books, mainly because a new film version of his classic "The Time Machine" was recently released in theaters to "rave reviews". You see, when I put "rave reviews" in quotes like that it can be inferred that these reviews were not in fact rave, which they indeed were not. Before the noose of circular logic tightens too much around my neck I would like to point out that the reviews were actually really fucking terrible mainly because the movie was very awful, or so I am told by the shoe shine boy I regularly bribe for information.

You see, I don't go out much to the moving picture cinema because of a little something we writers like to call "strangers". Strangers are the people who are out on the streets when you are but you don't know their names and you don't know where they came from and for all you know when they smile at you they are really thinking to themselves "this guy looks like he would make a lot of fritters if I chopped his torso up". People are a terrible thing, but I'm getting way off the topic of the new and terrible movie "The Time Machine" that I have not seen but I am about to talk all about anyway.

This is mainly because I have always been very fascinated with time travel, from my youth spent watching episodes of Dr. Who in which the one Doctor with the giant scarf would get shot by the silver guys who made no sound when their guns shot and then part of the set would fall over and a red light would flash, I knew the future was exciting and different. I would sit alone and friendless in my bedroom staring at a white wall and imagining the various possibilities and interesting scenarios that might occur were I to create the first time machine and hurtle myself into the future.

So, to recreate my youth and take you with me on a wild journey through the space-time continuum I spent the better part of the day staring at a white wall. When you aren't doing anything besides staring at a white wall you tend to come up with some really bizarre ideas, like Lowtax and his idea that circles have infinite corners or whatever that he keeps telling me about, although I think that was him finally caving in to stress psychosis.

I crafted my imaginary time machine from a series of interlocking plastic cups with the phrase "DRIVE FOR THE CHECKERED FLAG" and a faded picture of various cars along with the Pepsi logo printed on them. I selected these particular cups because they resonate with the power of duality; the symbolic yin and yang energy of the Pepsi logo. By chaining them I amplified this power, which I then caught in a bucket I placed at the end of the series of cups. The cups were suspended from the ceiling by a loop of fishing line, which is odd because I haven't owned fishing line since I was like 11 years old, but these sort of details don't really matter when you are talking about the future. To receive the amplified energy of the yin and yang I had to place an inert fluid in the bucket, for this I chose butterscotch pudding, not because it's particularly good at storing time travel energy, but because it's the most plentiful pudding flavor in my cabinet because it's fucking awful. I had some vanilla pudding too, which isn't quite as bad, but not enough to store all the energy and by god you cannot mix puddings in these sorts of situations, the results are far too unstable.

Now all I needed to enter the stream of time was some sort of fluid to pour across the cups. Since I had been sitting and staring at the wall all day I had quite the bladder full of urine, which worked out quite conveniently for my little mental journey through time. A nice pee break and a few minutes later and I was flowing through the stream of time with the greatest of ease. Time travel is sort of like taking a hot bath, only instead of water the bathtub is full of snakes and instead of being hot it's pretty bitey. In other words, the movie "Bill and Ted's Bogus Journey" basically portrayed time travel with slightly unnerving accuracy. 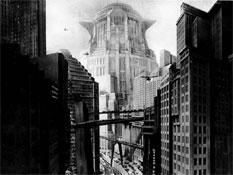 I think this might have happened because I was listening to Chemlab.I emerged from my time portal into the year of our Lord 2020, which of course was at the height of the "cyberpunk age". There were all kinds of giant buildings mixed in with huge industrial monoliths belching smoke and fire into the polluted sky, a sky the color of neon reflecting off a dumpster full of 40 weight motor oil. Being an aficionado of cyberpunk literature and films I knew I needed to watch out for three things; mega corporations, Asian crime syndicates, and virtual reality. To help myself blend into this post-modern future I immediately bought some robotic parts and had them installed into my body. I have some snoring problems so I had a cyber breathe-right strip surgically implanted across my nose, then I doubled the trouble by getting my voice box replaced with a cyber rape whistle, which was disappointing when I realized it only worked if someone was trying to cyber rape me, not just regular rape me.

One of the most fascinating things about 2020 is that it's always dark and raining. I must have spent a week just walking the streets of Neo-Tokyo City II and not once did I see the sun or the moon, just pitch black and towering edifices of capitalism taken to the point of absurdity. I talked to Shenji Kaga, of the Tongs, and he hired me to "run the grid" against the Yakuza. I took his Eurodollars and bought a hat laser, which is one of the deadliest weapon in any street ronin's arsenal. Through a long and convoluted series of events I ultimately did something dramatic and violent to strike back against the corrupt corporations with the help of a team of shady characters, many of whom gave their life for the cause. Feeling very satisfied with my work and my new cybernetic implants I made tracks so to speak even further into the future.Please don't ask how I did this because during my time staring at the wall I could think of no plausible way for the time machine I built to actually travel with me into the future.

My next stop after 2020 was the exciting year 3000. By this time mankind had domesticated the space hippos that drift harmlessly through the asteroid belts near Mars to serve as a sort of "astro blimp". This was a fascinating time in our future history, when dashing privateers and pirates sailed the highways and bi-ways of the galaxy using space hippo zeppelins as their futuristic galleons.

One of the biggest problems when serving as a space hippo navigator, which was my job when I infiltrated Space England's Hippo Fleet onboard the HMS Queen Hippomaximus, is overpowering their instinctual urge to crash through the atmosphere of nearby planets to wallow in lakes. We had quite a number of odd misadventures on board the HMS QH, including but not limited to; fighting robot pirate zombie mummy vampire ninjas, spending six months adrift in a giant sea of space Sargasso while the space hippo filled its belly, spending eight weeks in the asteroid belt while the space hippo grunted and crapped and tried to mate with an asteroid that looked slightly like another space hippo, and my favorite, crashing the space hippo into another space hippo and ejecting from the hippo control pod slung beneath it. 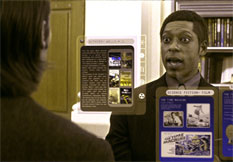 Thankfully, nothing quite this stupid happened to me in the future.After a year or so - I really lost track of time in the space Sargasso - I bid my friends onboard the space hippo a fond farewell and set off to the year 50,000.

First of all, let me say that this was a big fucking mistake. I should have jumped ahead like another thousand years or so, but I was feeling pretty awesome about an even bigger jump since the year 3000 was so completely radical. I set the cup array to 47,000 years in the future and hurtled once again through the snaky strands of space and time. I was welcomed to what seemed to be some sort of tropical paradise; palm trees, warm sea air, sandy expanses of beach, not a sign of civilization.

Wandering through the jungle growth I happened upon the ruins of some sort of Romanesque cityscape. Everywhere were dishes filled with fruit and carafes of wine, soothing music began to play and from the dense trees and plants a long line of people in togas began to emerge, their eyes glazed blankly, their posture rigid and zombie-like. I greeted them but they seemed not to hear me, opting instead to file into one of the coliseums and sit upon the floor while greedily filling their mouths with the fruit and wine. For a while I just sat around and amused myself with throwing pieces of fruit at their heads. I would have peed on them but I had to save all my urine for the return trip.

Eventually I got tired of watching them feed themselves and I continued to poke around the ruins, where I found a strange crystalline computer that explained to me how the world had become this wonderful paradise. In the year 6059 Scientology achieved global dominance, but the majority of the members of the Church were low level and completely unaware of the baby-eating lobstermen that the upper echelons of Scientology had become. Slowly, inexorably, the once-vast supplies of human infants began to shrink as the numbers of the high-level Scientologists increased. It became apparent that within a few centuries the world's supply of human infants would be completely exhausted if the Scientologists at the top did not act quickly. By adjusting the menu in the insane Scientologist commissary to include humans of all ages and reserving babies for fine dining and social events, they were able to avoid this disaster. Society evolved to revolve around these eating habits, with a cow-like population of humans on the surface of the earth fattened and bred for good flavor by the subterranean lobstermen Scientologists.

I put a stop to all that by summoning the unstoppable power of the Body Thetans, who the Scientologists had mistakenly believed long since destroyed. With their help and a little volcanic mischief I managed to overthrow the Scientologist oppressors so that once again normal humans could rule the earth. Oh, rule the earth jointly with the Body Thetans who turned out to be really cool. Kind of laid back and really into marijuana and muscle cars, but otherwise just like you and me.

My journey completed I returned to present day and my wall of fantastic adventure. Tomorrow I plan to eat some bad burritos and then write a story all about the agonizing hallucinations I have as various strains of bacteria ravage my brain.