Zack Parsons: The Next Governor of Ohio 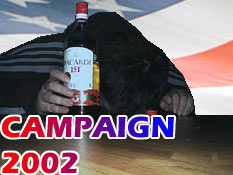 Another late night at the Parsons Campaign 2002 Think Tank!Being a regular and devoted Something Awful reader I am sure you are no doubt completely sick of hearing me complain about how shitty and small my home town is. My town is like one of those "wild west" prospector towns after all the gold dried up, only their never was any gold, just a factory that used to make platters for hard drives that closed up a year or so ago. It's not full of ghosts because empty lots and Wal-Marts don't turn into ghosts, people do, and fucking no one ever lived here. Our claim to fame is a restaurant called "The Spot" that frequently serves up bad mayonnaise that makes your ass bleed.

Things are about to fucking change! Sidney, Ohio, is about to show up on the map folks, because two go-getters who teach at the local high school are out to steal the governorship out from under the noses of those fat-cat politicos. They only have a five-hundred dollar campaign budget, but they feel confident that the power of the Internet is going to help them win this election.

To get ourselves on the ballot, we have to get 5,000 registered voters from Ohio to sign our petition and pay a $150 filing fee. Our campaign budget of $500 covers the anticipated costs of printing out some small fliers, a few homemade posters, and other incidental costs necessary to obtain the required signatures and complete the campaign. The application deadline for filing is right before the primary elections. We are exempt from the primaries as an Independent party.

Every day a handful of things I encounter get me to thinking. Usually these things are some sort of condiment or alcohol and they usually get me thinking about the sandwich I am going to make or the drink I'm going to mix, but today I encountered this shocking web site, which got me to thinking that I could be the governor of Ohio. I mean, I already have an audience with Something Awful vastly larger than what these yokels are going to reach with their homey little web site. I'm very charming in person, or so I am told by that creepy guy in the jump suit who always stares at me when I go into the bathroom of "The Spot" and then follows me in and stands next to me at the urinal while leaning against the wall. Most importantly I have a total disdain for the state of Ohio, and apathy towards your constituents is an important skill for any good politician. 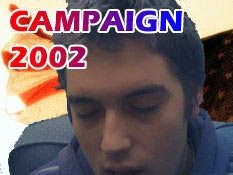 I don't even know who took this picture.Taking a page from the book of the extremely clever Whitman and Clark I have decided to use the Internet and a total budget of 50 dollars to run for Governor of Ohio. I have one upped them with my discounted price. That's 25 bucks for a bottle of Bacardi 151, another 10 bucks or so for a few packs of smokes, and the last fifteen for a pizza or something if I win. If I don't win I'll use the fifteen dollars to buy instant lottery tickets, because if I can't embezzle the big bucks as the governor than I will earn them the old fashioned way and have the government give me a big prize package!

The first part of putting together my unstoppable campaign steam roller was to decide what my party and platform were going to be. This wasn't something I could just bullshit my way through like those urine tests, this was serious stuff that would decide whether or not someone would vote for me. I'm a registered democrat, but lately the democrats have been a bunch of whiney pussies, and the republicans act all tough but they're twofaced pussies themselves, so I knew my party was "Independent". I don't think there are any Independent Party offices around here to help me finance my campaign, so I jumped right into putting together my platform.

I knew I needed an issue, something that would motivate people to vote for me and give me a means to attack those who sided against me on the issue; it had to be a controversial issue. I chose child pornography.

I'm not one of those goddamn perverted shitheads who gets off on that sort of crap, but I think it's important that people be allowed to express their free speech in this state by printing and distributing child pornography. As the governor of the great state of Ohio, I will make it my priority to repeal all state-level laws concerned with child-pornography and work to tear down the barriers preventing child-pornographers from having their voice heard by America. My next act as governor will be to form an investigative body to look at civil rights abuses such as black people being allowed to vote, women being allowed to have jobs, and the Asians buying up American land. I will establish and enforce strict border patrols with Indiana, Michigan, and whatever other states Ohio borders, to prevent the lawless influences of Indianapolis and Detroit from spreading into our hallowed borders. I will lower the drinking age to 15, lower the age of consent to 15, lower the driving age to 15, and allow 15 year olds to purchase and conceal firearms, because I have a 15 year old cousin and he is more of a man than any of you.

My motto is "A bible in every drawer, a shotgun in every car, a liquor bottle in every hand, child pornography on every coffee table, and send black people back to Africa." 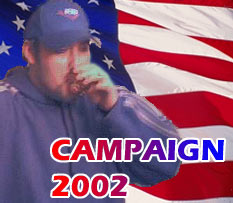 Day 2 on the campaign trail, notice I have not changed clothes, that's dedication folks.After I woke up and washed off the vomit from my "brainstorming session" on my platform issues, I realized that I probably needed to select a running mate. The only person on ICQ during my brief period of consciousness was fellow Something Awful writer "Livestock" and he readily agreed to be my running mate "as long as I don't have to step foot in that pisshole." Knowing that my chances for election were possibly as low as 1 in 3 I assured him that I would only ask him to come to Ohio if I managed to win the election.

Selecting a cabinet that would work with me on such important issues as repealing anti child-porn laws and commandeering a galleon to transport black people to Africa was much easier than selecting my running mate. For the department of transportation I knew the right man for the job was Earl Keener. Earl sits on the Shelby County court square every day of the week and will tell anyone that will listen that he is a necromancer. Who better to influence the ebb and flow of the rivers of our state's commerce than someone who commands a legion of the undead? Speaking of commerce, I knew William Barth would make a great Secretary of the Treasury from the moment I took his driver's license out of the wallet I had just found on the sidewalk. He weighed 127lbs and was 6'6" tall. Anyone in that kind of lean shape would also probably run a tight ship financially, so I gave him a call. I have yet to nominate cabinet members for my newly formed Office of Strategic Defense and Department of Child Pornography, but if you're interested drop me a line.

Together, with your help, we can win this thing and make changes that can be heard in the halls of Washington!

Well lookee here folks, it's a brand new Photoshop Phriday!!! It's been a while, but the SA Forums and grandmaster of sex Livestock have put together another mirth-filled outing into the land of wacky image hijinx. This week it's time for crazy boardgames, so fire up your Outlook Express and get ready to send mass spam-mails full of these things to all of your insipid coworkers!

I think I just blew something akin to a gasket from reading the pure comedy!