The lights are flashing. The beat is pumping. Bass is booming. DJ Puke in the club with the hot hot beat.

I take the stage, hammer pants effectively hiding my thunder. Pass the bone, kid, pass the bone, let's puke on this mission like Indiana Jones.

Rockin' the stage and the hunnies are palming my junk, and they still don't know what's in store. The song gets to the breakdown, and instead of dancing, I have a whole new set of moves I want to display. For all to see.

I throw back my head like I'm about to sing some Dio, but the only music that comes out is a stream of sweet gut juice. I soak the crowd, they're going wild, puking back and forth. I turn around and see my name flashing above my adoring fans...

The final sentencing and execution is to be carried out soon. I now approach each daily task and regurgitation like it's my second to last that I will ever do. I have honed myself into a finely tuned weapon of blast destruction. Soon I am ready.

I attended a football game last week in preparation for my mission. I wanted to make sure I was able to perform in front of a large crowd. Make sure I could puke at will when thousands are watching. Puke pressure.

Halftime hit - my time. As the marching band began their routine, I deftly used my moon shoes to clear the stands and landed on the field. I have 15 seconds before security gets to me. I found the band leader, grabbed the waist of his pants, pulled, and honked all up in them Dickies. Satisfied, I grasped the handles jutting out from my Rocketpack, and blasted off, laughing madly. I pressed the switch attached to my hip, and the scoreboard displayed.... 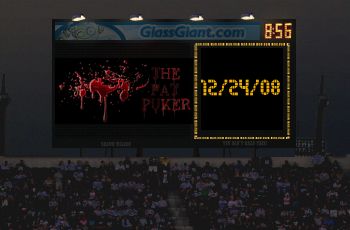