Without nostalgia, the world would be without ironic t-shirts, Robot Chicken, 95% of the jokes on Family Guy, and VH-1. So - in other words - without nostalgia, the world would be fucking tolerable. It’s important to punch people repeatedly in their childhoods – the flashing Contraesque weak point of the hipster - if only to prevent the possible production of a Street Sharks revival, now that we have the computer technology to make things accurately JAWSOME. Without realizing how stupid we were as children, actual enjoyment may come from re-experiencing the media of our pasts instead of the appropriate reaction of accusing our parents of child abuse. Of course, there’s always the slim chance that what we enjoyed in the past was not total crap, but to idealize these things is to live in a world of giant infants that drive cars and use most of their disposable income to recreate the events of their eighth birthday parties.

So, as a public service I will now show you what has become of your beloved childhood idols. Just the fact that some of them have MySpaces (spoiler alert) should replace any warm remembrances of your childhood with the tragic memory of the time your step dad crushed your new puppy’s skull with a cinder block because you were bad. Even if that never happened. 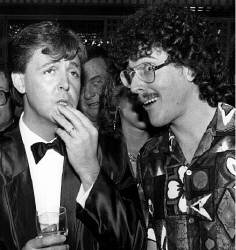 This is kind of like Van Gogh getting his picture taken with a Subway sandwich artist.

Have you ever noticed that the “Weird” in “Weird” Al is in quotations? That’s because he’s not weird. Following this convention, he could also be called “Funny” Al or “Profitable” Al Yankovic. But “Weird” Al is weird in the same sense that inserting hilarious uses of the words “cheese” and “monkey” into your dialogue would be. Spam! If you laughed at that, turn your computer off and leave this place. There is nothing for you here.

If “Weird” Al provides any service to this world, it’s that he shows us who is truly developmentally disabled. Do you know someone who still listens to “Weird” Al? Is this person over fourteen? If you answered “yes” to both of these questions, sever all ties, burn all evidence, and strategically use a claw hammer on different parts of your skull to eliminate all memories(you may want to read a book about this practice first). “Weird” Al’s parodies are supposed to be the gateway drug to real music, and the denial of Al’s music marks a passage into adulthood where one may say, “I would like to listen to this song, but I no longer want it to be about potatoes.” If real music is sex, then “Weird” Al is the clumsy unfinished preteen handjob, although “Weird” Al fans may not understand this analogy for obvious reasons. I know what you’re thinking, “But my really cool science teacher in middle school loved ‘Weird’ Al and he wore novelty ties and one day he melted a penny with chemicals!” Take a minute to think about this person. I don't know how long you've been away from home but I guarantee you his obituary read "single man slips while mopping studio apartment; eaten by housecats before he can make it to pre-paid cell phone."

If you think “Weird” Al has a place in the fast-paced music world of today, I have news for you: he’s been irrelevant since the invention of karaoke. And since karaoke was invented before he started performing(thanks Wikipedia), Al has always been irrelevant. The day a townie got high in his Camaro and changed Boston’s “More than a Feelin’” to “More than a Peelin’ (being about bananas or some such shit)” should have been the day Al vanished from existence, or dropped his musical aspirations to become something more fitting, like the office cut-up at a large packaging firm or the world’s most interesting compost heap.