Since I've been slacking off in my duties as a major news media outlet and have failed to inform you of the various things that you might be killed by this week, I feel it's my duty to catch up today. However, CNN, Fox News, and all those other networks already covered the everyday things that can cause you to die, such as faulty SUV tires, pollution, cold fronts, and minorities. That leaves me with the difficult task of reporting to you the "real" threats, the ones so dangerous and controversial that the major networks and shopping channels dare not associate themselves with them. Yes, that's correct, I am of course referring to the issues which are brought up on "Coast to Coast AM With Art Bell." Strap yourselves in, ladies and feminine men, as I take you on a ride full of sheer terror! And wonder! No wait, it's just a ride of sheer terror! There's no wonder involved! I changed my mind!

As there evidently aren't enough non-shadow men in the world who would willingly murder us for a pack of cigarettes, the Art Bell Show has recently exposed the Shadow Men, or as experts refer to them, "the Shadow Men." These mysterious creatures apparently live in another dimension and have the ability to travel extremely fast. Like even faster than a racecar. Going downhill. On fire. I mean the racecar's on fire, not the hill. They're so fast that we can only see them out of the corner of our eyes, as leading non-scientists featured on the Art Bell Show routinely claim in between callers phoning in and revealing that their cat can predict the future. I'm not really sure why only the corners of our eyes can pick up the Shadow Men, but since I've never seen the ice cream man's hyperdimensional shadow fly around right in front of me, I guess that's as plausible as anything. Nobody knows what the Shadow Men are made of, where they come from, or how they're able to survive. Think "Dick Clark," only with a lot less light.

At one point in the week, Art introduced his listeners to a self-professed "Shadow Man expert," a title which has the same impact as referring to yourself as "The French Minister of Time Travel." This "expert" took calls from listeners who were eager to find out if the mysterious specters which haunted them were the nefarious Shadow Men or perhaps various other nefarious things. A good two hours of the show went like this:

CALLER #1: "Hello Art. I love your show. When you stopped hosting it, I began digging Exacto blades under my eyelids to deal with the pain and pressure building inside my skull. Anyway, I have a question for the Shadow Man man. I was walking down the street and saw some shadow out of the corner of my eye. It seemed highly nefarious. I'd also like to say that I wasn't drunk when I saw it, no matter what Bill Watkins may say. Bill's a liar anyway. Was that a Shadow Man I saw?"

CALLER #2: "Yeah, I got a question for the Shadow guy. My maw said one time she was watchin' her stories when suddenly something black flew into the room and knocked over her Jesus mug. Then the shadow stole her hair curler and ran out the screen door. Maw said it smelled like clams, and she also saw it at K-Mart in the wicker chair section. Was that a Shadow Man?"

CALLER #2: "Oh boy. Thanks! Wait until Maw tells her poker friends! " (hangs up)

CALLER #3: "Hey Art. I was working late one night when something appeared in the wall and begin to shuffle all the papers on my desk around. I thought at first that it was my nine-year old son, but after looking at it closer, I noticed that it had no head. Was that a Shadow Man or does my son have the ability to remove and replace his head at will?"

CALLER #3: "Damn! I was hoping for a Shadow Man. Oh well, you can't win them all the time. Thanks anyway."

The entire show played like a game show of "Shadow Man or Poltergeist?", where contestants battled to give their best description of a Shadow Man. The winner got their prescription brain medication refilled and enough silver bullets to fend off the Mutant Space Worms for an additional 15 minutes.

None of the guest experts that Art invites on has any idea where the aliens are from, why they do the things they do, or what their ultimate purpose is, but they all inherently know that the aliens are terribly concerned with the health of our planet. Somewhere, zillions and zillions of miles away, a bunch of bug-eyed grey aliens are floating around and discussing alternative campaigns to recycling cardboard in Iowa. This is because the Earth, much like America, is the center of the universe. Everybody in space is completely obsessed with us to the point that they monitor our every move. Yes, that's right, our EVERY move. Even when you're doing... that. Luckily the aliens only care about our anti-pollution and recycling efforts, and not the activities that our left hand engages in underneath the computer desk. Professor John Mack, the founder of PEER, explained his theories regarding the alien phenomenon a couple nights ago. Before you instantly discredit John, let me remind you that many people consider him to be the "Father of Alien Study," or the "Daddy of Alien Research." That makes him "Professor John Mack Daddy." I don't think anybody could ever win an argument against somebody with such a name. It's just not possible.

ART BELL: "So Professor Mack, why do you think the aliens are here?"

PROFESSOR MACK DADDY: "They want to protect us from ourselves. We're destroying our planet. We're horrible monsters and I pray for our collective deaths. We're dumping toxic waste everywhere. The human race will destroy itself in two years. This planet will only be livable for nine more days. The aliens want to help us by exposing the truth and beauty of giving up all our worldly possessions and holing up in caves, where we will live off rock moss and toenail clippings."

ART BELL: "And how do you know this?" 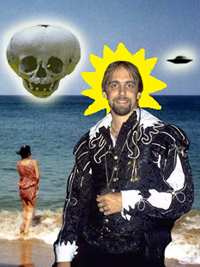 I personally think "the aliens told me" is an excellent answer and explains a lot of things. For example, have you ever seen how Richard Garriot dresses? I've never been able to explain how the guy manages to weave together enough bar napkins and potholders to make a functional outfit, much less why he chooses to wear them during photo shoots, but there he is in every picture, grinning like a madman and wearing a shirt which can double as a 13th century throw rug. However, now that Professor Mack Daddy has revealed that the aliens are actively talking to people and saying really vague and confusing things, I think we've solved the enigma. I find it just as easy to believe that Martians are instructing Richard Garriot how to dress as it is to think that the aliens are really concerned with my decision to choose paper over plastic. In fact, I'm going to start using this as an excuse for everything.

POLICEMAN #1: "So why did you murder that 80-year old woman and dress up in her clothes while opening fire on the marching band?"

ME: "And then they said that using fossil fuels is bad."

POLICEMAN #1: "Hmmm, his story checks out. Those are the aliens. Okay, you're free to go."

So those are the two major threats we're currently trying to avoid; the evil Shadow Men and the not-so-evil aliens. As far as I can tell, the only way to play it safe these days is by driving a very fuel-efficient car and always staring straight ahead. I'm not exactly sure how being abducted and having metal probes stuck up our asses aboard a UFO accomplishes either of these goals, but I'm sure that will be explained in a future episode. After all, the aliens told me it would be.

Since I forgot to post a Fireman Comic last weekend, I'll take this opportunity to make it up by... uh... posting a new Fireman Comic. Thank K-Dog for once again serving up a hot and spicy winner!

It's like raw comedy is 16 colors and sitting on my desktop!

As mentioned numerous times in the past, SA isn't really rolling in dough. Okay, we're broke. I haven't had running hot water in months. To make this a profitable site, I have enlisted the aid of professional web designer Roger Makoe, a man with years of Internet experience and credibility. Head on over to his hosted site and get a great deal on your next professional website design!

NOTE: I asked Roger to send me an email, giving me a brief writeup of his site, but apparently he hasn't been able to figure out how to use Microsoft Outlook Express. However, he has assured me that the program is working and he can get all the email you send him, so feel free to contact him for an estimate or site design suggestion! Welcome, Roger!