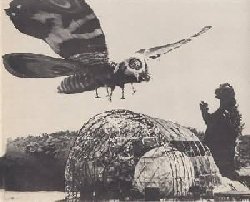 Hi, my name is Gigan, and I’m a 500-foot radioactive monster. Sure it may not seem all that special nowadays with you kids and your cherry/vanilla soda hybrids and complicated basketball shoes, but in the 50's and 60's we were the talk of Tokyo. We were larger than life, the kings of civilized eastern Asia. When I look back at those turbulent times of crushing buildings, eating countless armies, and fighting my fellow monsters, I have to chuckle. We were so young, brash, and cocky, thinking that we could live this fast-paced lifestyle forever. We were fools, and in the end we paid for our ignorance.

A lot of people ask me if I know Mothra. Sure I knew Mothra, but nobody really knew Mothra. I worked with him many times and he was a pro all the way. He was never late for a battle, and brought a touch of class to our art form of deconstruction that many people just thought were clicks and whistles. He was always a distant sort of chap, lost in his own thoughts, shying away from the loud groups of monsters like Rodan and Battra. Maybe he was a dreamer and had bigger plans for himself other than serving as a taxi for two little Samoan bints, and knocking over skyscrapers with his blustery wings.

He was a rebel, but not in the traditional sense of the word. He saw all the hate, death, and confusion that were caused by the war, and the devastation that it caused to his homeland of Japan. If there was to be peace in our time then it was up to the beings of Monster Island to enforce it. But it didn't really work out that way. This is a story about how Mothra pushed the boundaries of what we as misunderstood genetic oddities could accomplish with teamwork and the power of true love, and how it all fell apart. There is no way to tell his story without telling my own. And if his story really is a confession, then so is mine. 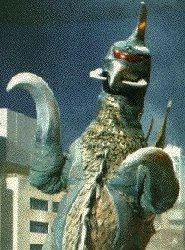 Here is a rather embarrassing pic of me in '63. I'm on the Akins diet now.

One day in the summer of '64, I was walking down the road towards the Nagasaki harbor looking for a nice sandy spot to catch up on my reading. Then all of a sudden a barrage of tanks starts shooting me! I mean, what the fuck? See, every time a monster would venture into human territory, they'd never leave you alone and keep blasting at you with their stupid little tanks and planes that sting like a mother. So for awhile, I was just stepping on tanks and kicking over power lines, and then I caught a glimpse of Mothra swooping down to join in the fray. First of all let me tell you a little more about Mothra. He was always really sympathetic to the human condition and was always the first to defend them. Modern psychologists promote coddling the weak, but back then we saw that as a huge fault, probably Mothra's largest. So Mothra and I get into a fight, a real ball buster. He flapped his wings, creating hurricane gale winds and I fell onto a suspension bridge, and then I shot a laser out of my horn and knocked him out of the sky. I was beating up on him pretty good but then that asshole Godzilla crashed the party.

Godzilla was the prima donna of the group. I think his lizard of a mother ignored him because he always had to be at the center of attention. Even if you wanted to have relaxing, quality alone time destroying a power plant or eating some school kids, it was guaranteed he would show up and screech "Hey what's going on? Wanna hang out? I made a new demo tape." All the other monsters went out of their way to avoid him at all costs. Anyway, once again he ruined what was turning out to be a classic heads up battle. Then something happened that would change the monster community forever. Mothra, the center of calm and reason, totally lost it and started beating the crap out of Godzilla. It really took Godzilla off guard because they were supposed to be friends, but Mothra just cracked. He never could handle the stress of this sort of work, and after knocking Godzilla down with a laser bolt from his eyes, it was obvious that Mothra had gone mad. We both looked at each other in puzzlement as Mothra flew back to Monster Island were he stayed in seclusion for many years. 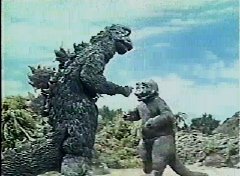 Godzilla with his little turd of a son, Minya. This was right when Godzilla was telling him he was adopted.

Things changed after that. Mothra was the glue that held the collective Asian monster society together, and if he couldn't hack it in the long run, what chance did we have? Godzilla was the first to go. Soon he had a wife and this little brat of a kid called Minya. She didn't approve of him being out too late or coming home with mortar shells lodged in his scales, so the random destruction in Japan nearly ceased. Also that little shit Minya was loud, annoying, and stricken with chronic ADD. Godzilla was a horrible parent, because hey, how can he really discipline the child, after all his wanton rampages causing the deaths of millions, without sounding like a hypocrite? To make matters worse, Hedorah, the smog monster, committed suicide with sleeping pills. "None of this would be happening if Mothra was here," we would all glumly say as we pussyfooted around in our half-hearted battles.

It was then that we had the intervention for Mothra. His self-loathing, morbid isolation, and heavy drinking was tearing us apart. We all showed up: Godzilla, Angilas, King Kong, Biollante, Baragon, Spiega, Jet Jaguar, and even Ebirah. Ghidora made brownies. At first Mothra was very defensive, like anybody would be in his position, but he quickly realized that we were right and his behavior was not just self-destructive, but affecting all of Monster Island. Not to mention that the Samoan twins had grown fat on coconut husks and melons in his absence. It finally took a hard smack with Godzilla's tail to rouse him out of his glum state and knock us all over with a wind tornado of anger. Soon we had a huge battle royale that was tons of fun, and when nobody was looking, I threw a large boulder on Minya's head and gave him permanent brain damage. We rejoiced for the old Mothra was back and Monster Island was once again a place of excitement and awkward, cumbersome fighting.

Monster Island in the middle sixties was a very special time and place to be a part of. Maybe it meant something. Maybe not, in the long run. But no explanation, no mix of words or music or memories, can touch that sense of knowing that you were there and alive in that corner of time and the world. We had all the momentum; we were riding the crest of a high and beautiful wave. So now, less than 35 years later, you can go up on a steep hill in Tokyo and look west, and with the right kind of eyes you can almost see the high-water mark - the place where the wave finally broke and rolled back, drowning a small fishing village.