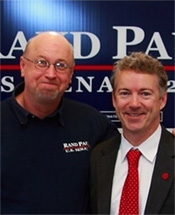 Happier times with me and the Randmeister.Ladies and gentlemen of the jury, let me be the first to admit that, from your perspective, my actions may seem appalling. My critics -- sometimes known as "plaintiffs" -- have often taken me to task for methods I like to call "Profitt Crowd Control," and for that I have suffered greatly. But, just like Our Lord Jesus, I do not judge them for their profound lack of perspective; they have no idea my technique of successfully quieting subdued foes traces itself back to a chilly February morn', when I had to repeatedly boot a gut shot fawn in the throat to silence its pained bleating.

Yes, that was that day I became a man -- though I don't expect any of your fancy Marxist colleges to teach about the trials of life for hardworking Americans like me and probably that judge over there. Before you find my behavior to be legally barbaric, please listen to how PCC has helped me peacefully diffuse conflict in past instances with uppity types who are lucky that my back pain chooses very specific times to flare up. 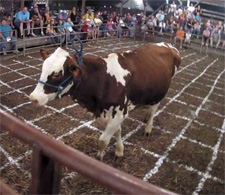 It's never pretty when gluttony rears its ugly head at a respected church event.Let me paint a scene for you. The year: 1985... May, to be specific. I took my gun club boys, Vinton and Duke, out for a lazy afternoon of eating ribs and making sure Vinton didn't drink himself into losing another custody battle. When we got to the cook-off, we greeted the comely assistant principal Ms. Stevens, who was holding just about the stickiest plate of ribs you've ever seen. Well! Me and Vinton and Duke are just sitting under a tree, enjoying God's pork bounty when Duke drops his special Thermos and points over to the Stevens lady -- getting seconds before we can even enjoy our firsts! Now I'm not about to let this conduct fly at a Church-sponsored event of all place, so I nod at my two friends, and off they go to speak with Ms. Stevens -- who, mind you, was armed with two plastic utensils that could easily pierce the skin if launched with the right amount of pressure.

An exchange of words quickly turns into harpy-like shouting by the Stevens gal, who demands to know where we get off telling her what to do. Before this argument could end in tragedy, Vinton and Duke unleash their signature clothesline that once ended in involuntary manslaughter during a particularly ugly bar fight. Now, I would have shouted at Ms. Stevens to simply remain calm until the authorities could take her away, but with my mouth full of sticky rib meat (and my hands covered with the same), I had no other choice but to slip my boot off and press my big toe down firmly on her windpipe until she wet herself... which she did, in front of a crowd of onlooking fifth graders. She might have kept the nicknamed "Ms. PEE-vens" since that day (she never married, for obvious reasons), but I upheld the etiquette of a delicate Christian social function, all the way until cow chip bingo started.