Do NOT Live a Lifetime! Do NOT Believe the Lies!

The lady in this picture is trying to swim away and escape the evil clutches of digital cable's lies!

As mentioned before in yet another one of my dull and pointless updates, I was unfortunately tricked into having digital cable installed in my apartment. They offered me one of those so-called "Always Save Val-U-Pak SuperSize Barn-O-Tron" deals where you save roughly $500,000 a year if you agree to subscribe to every cable channel in the solar system, in addition to certain AM radio broadcasts and local cable access shows that revolve around three bearded 20-year old kids rambling on about Jerry Garcia until their camcorder runs out of batteries. Now in theory this sounds like a simply marvelous idea; I mean, the more cable channels the better, right? The more options you have the better chance there is of finding something incredibly entertaining, right? In theory, yes. In theory, the cast members of "Seinfeld" would have no problems starting their own wildly-popular sitcoms that would not be canceled minutes into their premier episode. In theory, the Earth would start rotating around the sun faster if we vaporized all the fat people or tricked them into using their large intestines as a really cool waterslide for kids, thereby allowing us to orbit the sun faster and go back in time and save the whales so Leonard Nimoy won't have to fly down to Earth and turn off some punk's boombox inside a bus. In theory. However, when he comes down to brass tacks and brass nails and brass hammers and brass plywood, this theory falls flat on its face. Do not believe the lies of digital cable for it is the Great Satan!

See, the cable networks don't like making channels that people will actually watch. They choose quantity over quality, resulting in such wonderful channel networks as the Encore Network, which owns roughly 15 billion stations and specializes in the most boring and unwatchable crap since that Emeril Lagasse show. Here's a brief excerpt of just a few channels listed on the Encore Network:

Encore's Movies That Begin With the Letter "H"

Encore's "Every Movie Is Shown Backwards and In Slow Motion"

Now answer me this: who the hell actually watches Westerns anymore? Didn't all those people die in the late 1970's? As far as I know, there are only six people left on Earth who are interested in watching Westerns and five of these people are so old that they regularly confuse their watch with the television set. Nobody likes Westerns, nobody watches Westerns, and everybody who ever starred in any Western has been dead and buried since the Hoover administration. Yet Encore shrewdly elects to create an entire station dedicated to belching up the same 12 movies over and over and over again until the dead rise from their graves and start subscribing to digital cable networks. OOH, will the guys on horses find that gold they've been searching after for the first 50 hours of the movie? OOOH, will the Injuns scalp the settlers and then run back to their wigwams and dance around a fire while constructing primitive casinos (which were then known as "maize")? OOOOH, will one of the scenes take place in a wooden shack with the word "SALOON" hanging above it on a chunk of rotting plywood? Good thing the movies rotate every other day so we can see them over and over and over again until we can memorize by heart the estimated total density of all the tumbleweed throughout the movie. 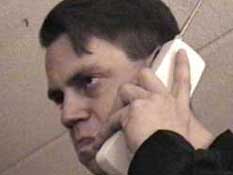 Hey ladies, if you ever see a guy like this, try NOT to marry him. I know the temptation will be hard, but I hope you can do it.

Despite Encore's lineup of painfully worthless channels, I'd have to say the The Lifetime Network is by far the single worst thing ever created, even slightly worse than Scientology. This channel is dedicated to entertaining lowly, depressed, alcoholic housewives who loathe their husbands and would pay good money to see their bratty, loudmouthed children shoved into an abandoned refrigerator behind a Denny's parking lot. Every show, and mind you I'm not exaggerating here, EVERY show revolves around how evil or scummy men are and how there should probably be laws requiring mandatory abortions of male fetuses. Here are the basic plotlines for each and every movie on The Lifetime Network:

Man fakes his own death and leaves painfully obvious clues that any moron with half a burrow owl's brain could find. Woman tracks him down and discovers he's leading another life with another woman who is more attractive than her. Man eventually gets shot, falls down an elevator shaft, or trips face-first into a weedwacker.

Man divorces woman and shares custody of her kids. One day he takes the kids and never comes back. Woman goes searching cross-country for the man so she can get her kids back. Man eventually gets shot, falls down an elevator shaft, or is crushed by a meteor.

Single mother hires a babysitter to look over her kids while she attends an important charity function. Babysitter kidnaps children for no reason and meets up with her redneck bearded boyfriend who appears to have a full-time job of manually changing the oil in cars with his own hair. There is a dramatic showdown and the babysitter is killed by her boyfriend, then the boyfriend is shot, falls down an elevator shaft, or has his vital internal organs replaced with objects that detonate when coming in contact with vital internal organs. 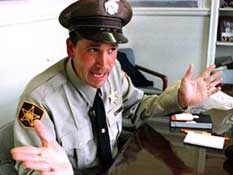 "Sorry miss, but that whole 'serve and protect' thing is just a trademark, not an actual requirement."

Throughout these three plots is the consistent theme that if you're a woman who really cares about her children, there's absolutely NO WAY WHATSOEVER that the police or FBI or any other official government branch including the Post Office will ever help you with anything. Ever. Any female who enters their offices is immediately declared loony and her farfetched story is dismissed quicker than the guy who came in before and claimed his cow gave birth to a UFO. The police will only step in during the last two minutes of the movie, and that's only because nobody else has that silly "POLICE LINE - DO NOT CROSS" yellow tape to string around the open elevator shaft. I've often wondered why minorities are always the groups bitching and whining about how much they hate cops just because the police shoot them when they're committing crimes, running away, playing cards, knitting, or sleeping. How come we never see housewives rioting and holding demonstrations throughout the streets of crappy downtown districts? Judging by the types of movies featured throughout the day on The Lifetime Network, they have more than enough reason.

WOMAN: "Officer, you must help me! My husband ran off with my children! He's going to sacrifice them to the Dark Lord! You've got to help me get them back!"
COP: "Woah, woah, slow down there lady! Now what makes you say this?"
WOMAN: "Here is a letter he wrote saying, 'Mabel - I took the kids and I am going to kill them in the name of Satan. Be back later.' Here is hidden camera footage of him kidnapping our children. Here is the address of the building he's heading for. Here are the records of his involvement with this cult. You have to help me!"
COP: "Woah, woah, hold on a second there miss! Now what makes you think your husband is behind this?"
WOMAN: "Here is a cassette recording of the phone message he left on my answering machine, containing described details regarding his plans to take our kids and murder them all! Here's every member of his family, willing to testify to you right now and confirm this story!" (family waves and smiles)
COP: "Woah, woah, take a breather there ma'am! I'm afraid we can't help you on this one. We legally can't do anything until your kids are dead and your husband has voluntarily turned himself in and we spend 40 years examining the evidence against him! And even then we probably can't do anything! Most of us don't even know how to start our police cars or leave this office."
WOMAN: (Storming out of police station) "Looks like I'll have to take matters into my own hands!"
COP: "Whatever you do, don't take matters into your own hands!"

At that point the woman takes matters into her own hands and begins performing impressive feats of detective work including using a search engine to find keywords and asking gas station attendants if they've seen an evil man with two kidnapped children buying Clarke bars in their store. Eventually the chase ends and the woman confronts the evil husband / ex-husband / babysitter / statue of George Washington Carver and somebody gets shot while adopting a really concerned and surprised look on their face. Once the person is dead the police sweep by, undoubtedly to arrest the woman and shove lit matches up her nostrils for killing such an innocent man, and the movie fades to black while the police officers hand off the woman's children to a state-appointed child care worker who will eventually run off with them in the sequel, "A Perfect Woman and Her Asshole Husband 2: Child Molestation Boogaloo." Thank you very much, Lifetime Network! I now know that the only people who commit crimes are white heterosexual men and the only crimes they commit involve the lucrative industry of stealing children... and yet somehow this isn't a crime because the police only care about standing around the station and telling people "listen honey, we'd like to help you if we could, but our hands are tied. There's nothing we can do." Then the husband breaks in and starts raping and strangling the woman in front of the cops while they just stand around and reply "you should come back here when you've got some firm evidence. Right now all you've got is speculation."

So, in summary, quantity does not equal quality in the world of digital cable. Sure having channels that range into the millions sounds like a great deal on paper, but when it comes down to it you must realize that 99% of these channels center around women's tennis, Mexican soap operas, and people who are intent on selling you some gadget made of "advanced polymers" designed to either get rid of your hair or make it look like you have more hair. Do not be fooled by the lies of digital cable my friends! And don't marry a man!