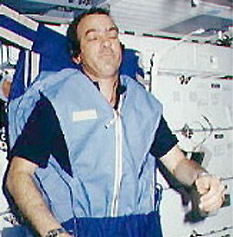 Astronauts, much like cows, sleep standing up. Also like cows, they will kick you if you attempt to insert your penis in them while they are asleep.There is a certain purgatory we all inhabit between the land of the living and the land of the sleeping. I've heard Dr. Science say that this is untrue, that you're either asleep or awake, but the last time I listened to Dr. Science I ended up stuck on top of a water tower with three weather balloons tethered to my scrotum. He's a liar and his ways are no longer mine! Rather I believe that we all have this land of craziness that much like New Mexico's Land of Enchantment provides a strange boundary for our brain's transition from one wholly different mode to another.

Ignoring Dr. Science, there are two distinct types of semi-sleep. There is the entry transition where you're descending into the warm quiescence of slumber and dreams, and then there's the bouncing, jolting, hard landing of emerging from sleep and into the painful awareness of the waking world. The first is usually very gentle and seems to be characterized by a slow and pleasantly gradual slide from a stream of conscious thought to seemingly nothingness. The black lasts only as long as it takes for the brain to charge its "nutty circuits" for that first dream excursion.

The exodus from this dream world is often almost violent, your eyes open and everything seems slightly painful. You struggle to return to the womb, to get back into the groove, to "Mom, five more minutes". 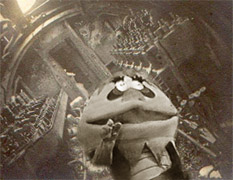 H.R. Pufnstuf will chew through an iron bulkhead to crack open your bones and suck out the marrow.Last night I had a very grim and somber dream about being pursued through a dilapidated office building by H.R. Pufnstuf. While the characters of Sid and Marty Krofft have no doubt inhabited the nightmares of many, this nightmare was particularly disturbing because of a mild phobia I have about urban decay. I hate being inside really dilapidated buildings, or even worse, beached and rusting ships. Not that I ever have been in a beached and rusting ship, I just know it wouldn't be my vacation spot of choice. Unfortunately as I passed through a door, the keening of Pufnstuf echoing from the barren walls, I emerged onto the rolling deck of a dead ship in a storm-tossed inlet. My fear of the ship was quickly overcome by my fear of the approaching Pufnstuf and as I crossed the deck and descended into one of the cargo holds my dream took one of those hard turns.

I was in a friend's bathroom at a party, the sounds of merriment muffled through the door, my stomach churning and queasy from what my dream logic told me was eating too many of those wax pieces of fruit. As I hunched over the porcelain to spew up a viscous wad of masticated wax I surveyed the furnishings in the bathroom, notably some toilet cleaners, a toilet brush, and three umbrellas. I didn't bother to wonder why there were umbrellas because I was too caught up in the Civil War battle being re-enacted by wax figurines floating in the toilet. Apparently the figurines had shaped themselves from the fruit in my stomach and the wax generals had decided that my esophagus looked very much like Antietam Creek.

That's when I was jolted back to reality. Michelle was standing next to the bed and I reached out suddenly and grabbed her by her shirt. Looking up at her with an expression that mirrored the utter horror of the dream world I still seemed to be trapped in I shouted two words that I hoped would warn her of the danger we were in. 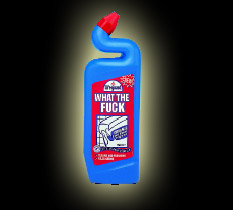 I know starving children in Africa who have a better idea of why I yelled Toilet Duck than I fucking do."Toilet Duck!"

Its red and blue colors danced before my eyes, and then I realized that I was dreaming, that screaming "Toilet Duck" was not an adequate substitute for "good morning", and that some explanation might be in order. But there I was, stuck in that state between awake and asleep, unable to fashion a reasonable response for her real-world mind from the gooey mess of my dream-world mind.

"With the neck," I mumbled. "Goes under the bowl." I nuzzled the pillow, so utterly tired, and despite the horrors that might await me I fell headfirst back into that dream land.

Later, once I had fully escaped its evil clutches, I tried my hardest to reconstruct the dream events that might have led to the real events of that morning. Unless you keep a dream journal under your bed, plastered with "Invader Zim" stickers and full of totally deep drawings of spirals and anime eyes, you probably find it pretty difficult to remember much of anything that happened in your dreams the night before. Sometimes maybe an image or two carries with you, maybe an entire scenario, but I have met no one who can remember an entire night's worth of dreams. All I had left was the Pufnstuf chase sequence and the bathroom vomit battlefield, and an overwhelming feeling of terror and foreboding that came wrapped with the image of the Toilet Duck. Eventually I came to the conclusion that just before I puked up General Burnsides onto the surface of the toilet water, a bottle of Toilet Duck caught my eye.

"How could it not?" you might ask in that saucy voice that suggests you're about to go gay for Toilet Duck "Look at its seductive neck and feminine curves!"

Well, you see, to my knowledge I have not seen - on Television or in person - a bottle of Toilet Duck for years. Therefore it can be assumed that I was not about to journey off into some sort of Toilet Duck-related sexual fantasy. I'm sure I wasn't about to have five hundred tiny Civil War soldiers tying me the floor of the bathroom like an army of gastro-intestinal Lilliputians and then forcibly inserting that delightful cleaning beak of Toilet Duck into my anus. Okay, so maybe that was up next on the dream scheduling board, but I had to develop a theory as to why.

Theory One: As a Child I Was Raped By Toilet Duck

If as a child I was raped by Toilet Duck, this would explain the sexual tension and terror associated with Toilet Duck. Whether I was assaulted in my home, or lured into a car by Toilet Duck wearing a disguise, I ultimately came to know and fear the identity of my attacker. If I were masochistic it also might be possible that I was beaten rather than raped by Toilet Duck, but since I'm the biggest pussy ever when it comes to physical pain, I assume it had to be rape.

Theory Two: Toilet Duck Was a Girl I Had a Crush On

I don't remember ever knowing a girl like Toilet Duck in school, but its certainly possible that my lovelorn brain has erased her memory so as to save me from years of heartache, trapped in a relationship that will never quite fulfill me the way Toilet Duck could have. Yet, she calls to me from my dreams, beckoning me with her Hepburn neck and sweet kisses that may be harmful if ingested. Oh Toilet Duck, come back to me, so that I might drink of you and seek medical attention or call the Poison Control toll-free number inscribed on the delicate swell of your backside.

When you really sit down and think about it, and I mean really noodle it, not this lay on the couch and play Game Boy Advance all day crap, Toilet Duck is a hero to all of us. His bendy neck allows him to get to hard to reach places, I wish I could get to places like that too, but I'm no fucking Toilet Duck. Then when he gets to hard to reach places he spews out a fountain of powerful cleaning solution and you don't have to scrub you just flush! The Scrubbing Bubbles are cool, yeah, but anyone can do what they do, which is skate around your toilet and foam like a spazz while cleaning up absolutely nothing in hard to reach places. Toilet Duck could easily have prevented the September 11th attack of last year if only he weren't constrained by the boundaries humans put up around him. Toilet Duck tried to save John F. Kennedy, but he can only be in so many places at once (three total) and there were just too many incoming rounds. Toilet Duck warned us all about Pearl Harbor, but did we listen? No, we just put him to use cleaning our toilets instead of letting him save us from ourselves. Don't hate Toilet Duck, praise him! 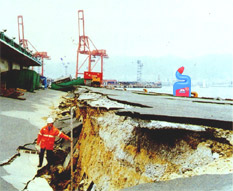 Toilet Duck can and will destroy us all.Theory Four: I Am Attracted to That Which I Fear

Locked within his silent bosom, Toilet Duck holds the key to a power which could destroy us all. He's not telling any of us what that power is, but know that if it ever falls into the wrong hands, or Toilet Duck grows tired of our abuses, that we will suffer terribly. If I had to guess I would say that Toilet Duck can unleash the forces of nature on us, summoning gale force winds, tsunamis, and earthquakes at a whim. I live in abject fear of the day when we will wear out our welcome and Toilet Duck will smite us all with the fury of our own planet. Yet, at the same time I find myself drawn to this power that Toilet Duck wields over all of our lives.

Any one of these four theories may be correct, I can't be sure just yet, but I promise to let you know the moment I receive more prophetic information about this celestial interloper, this hero of heroes, this shining star: Toilet Duck.

This is Livestock, here to tell you that there won't be a Photoshop Phriday for you this week because I'm keeping it all for myself. I swear, if I catch you clicking on a link to my Photoshop Phriday, I'll hurt you like you've previously never been hurt before. I like to scrap, and let me tell you, we will scrap. This week my Photoshop Phriday is all about putting a new spin on a popular search engine. I will let you see a sneak peak of what the goons came up with, but this is all you'll get!

Absolutely do not read my Photoshop Phriday!