Tuesday, Nov 18, 2003 by Rich "Lowtax" Kyanka (@TwitterHasBannedAllMyAccountsEver)
Know of an awful site? Send it to us and become a hero!

Queer Vampires, submitted by mardok. You know you've stumbled upon a real winner of a website when the first paragraph you see reads, "With all the interest people have in vampires nowadays, I was really upset to learn how little there was on the Internet about queer vampires." Okay folks, I get upset just as much as the next guy, but I can honestly say that I've never gotten upset over the amount of information regarding queer vampires on the Internet. I get upset when people cut me off in traffic, I get upset when my dogs pee all over the rug, and I get upset when I realize half my body has been engulfed in flames. I do not, however, get upset after thinking about the amount of information regarding homosexual vampires on the Internet. I will never get upset about homosexual Internet vampires and I really pity the person who does, because that's a pretty big sign that something significant is missing from your life, something that perhaps only a shotgun blast to the face can solve.

"I'm afraid that you've been infected with a sort of disease Gerry," she said. "You might find this hard to believe, but your body should help. I'm a vampire. Not in the classic sense. I can go out in sunlight, don't suck blood, don't sleep in coffins. But I am immortal. And what I suck is cocks. Big, huge cocks. About half an hour ago, you became one too. All vampires of out kind are, as you are now also, female. We need cum, not blood, in order to survive. Its not known why only the occasional man is transformed, but it does happen, and it did to you tonight." 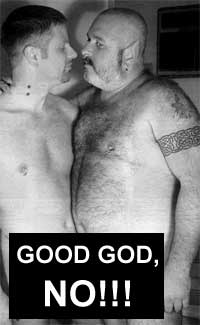 Queer folk have also been associated with vampires in many ways. Homophobes have referred to us as drinkers of life, corruptors of society and of spreading plagues o'er the land. The same people have associated Gays and bisexuals with AIDS, a disease which can be spread through the exchange of blood, and which eventually weakens and kills it's victims in much the same way that vampires are seen to eventually drain the vitality and life out of theirs.

I'm going to go out on a limb here and claim that this site has actually made me more upset than realizing the significant lack of homosexual vampire sites on the Internet. This whole site makes my batch number very unhappy!