Palladium's dimension-spanning Rifts RPG managed to spit out about 50 source books based on locations both real and imagined. In 1999 Rifts creator Kevin Siembieda turned his attention north and payed homage to Canada with Rifts Worldbook 20: Canada. In keeping with Rifts tradition, the book was one of the strangest ever written about its subject matter. Prepare to never play RPGs in Canada the same way again. 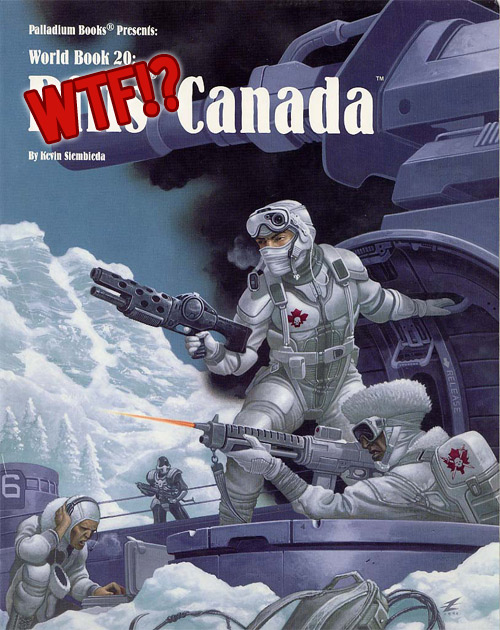 Zack: I can't ignore the symptoms any longer, Steve. I think I'm dying.

Steve: Oh, whew, you had me going I thought you were actually dying.

Zack: No, I am literally dying from Rifts. This fucking game...

Steve: Take it easy, dude, it's just Canada. It will be a nice, relaxing book. Nothing to get worked up about.

Zack: Worldbook 12: Psyscape. He died creating a Bubblemakers character for Peter Fonda's new high-level campaign. Slumped in his bed and the mechanical pencil slipped from his fingers.

Steve: I almost died making a Mage character but it was because I was driving a car at the time.

Zack: If you had died they could have named the legislative response after you.

Steve: That works. I've always wanted my own law but I never wanted to be sex assaulted.

Zack: Character creation while driving a motor vehicle is strictly limited to point buy only and you must dictate your point allocation to a passenger to fill in on the character sheet.

Steve: You can roll up a character in a car, but you have to treat it like if you see a tornado and pull off under a highway.