Sunday, Jun 06, 2004 by Rich "Lowtax" Kyanka (@TwitterHasBannedAllMyAccountsEver)
Know of an awful site? Send it to us and become a hero!

Rapture, 666, Armageddon, Revelation, Bible Prophecy, 911, Mark, submitted by TremorX. ust in case you may have forgotten, the world is still going to end tomorrow or maybe the day after that, everybody in the world except two people are antichrists, and that the only way we can save ourselves from this imminent destruction is by doing something which involves telling the webmaster that he is not insane and yes we would love to purchase his book about giant dinosaurs and NAFTA. Benjamin Baruch, the webmaster and author of the best selling book "The Day of the LORD is at Hand," is here to share with us the secret to surviving the end of the world, something which involves public domain photos of nuclear explosions and asteroids. 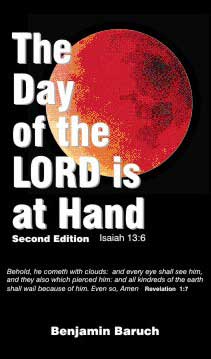 Over the next seven weeks, I typed over 300 pages, working night and day. Many times, after an 18 to 20 hour day of typing, the LORD would awaken me after one or two hours of sleep and say "Get up! You have to work!" I would answer, "Oh LORD, I am so tired, can't I sleep a little longer." "NO, You have to get up and work. Get up and pray and I will strengthen you." I would struggle out of bed, lift my hands and say In Jesus Name, and a tidal wave of the anointing would hit, I would jump up out of bed fully rested and begin to type for another 18 to 20 hours... This went on for weeks on end.... As long as the anointing of the Holy Spirit was upon me, I would sit at my computer and type.

Basically everything on this site boils down to Benjamin claiming he predicted 9/11 and this somehow makes him an expert on the impending apocalypse. If the end of the world means the end of his crazy webpage and book, then hey, I'm all for it.