At the end of The Shawshank Redemption, Andy Dufresne has finally escaped from prison. He emerges from the pressing filth of a tunnel and lifts his face to the falling rain, his arms outstretched as if to embrace the open world before him. The camera looks directly down on him from far above, slowly dropping with the falling 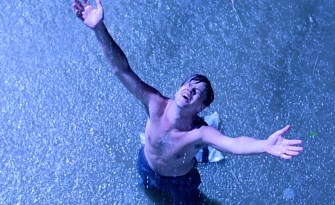 raindrops until finally Andy's face is all that we see. Smiling, he whispers a shocking revelation as distant lightning illuminates his features, the brilliant flash serving as a metaphor for the truth being brought to light. "Rain is my favorite weather. It has been the whole time."

In Indiana Jones And The Temple Of Doom, a frightened man is shackled to a cage as part of a cult ceremony. The priest Mola Ram recites an incantation to draw upon the power of a wicked god. Ram holds out his hand, fingers splayed, and lowers it to the chest of the prisoner. His fingers plunge in and remove the still-beating heart. The sacrificed man screams, incredibly remaining alive as his cage is slowly lowered into a whirlpool of swirling lava. Breaking the fourth wall, he winks at the camera. We see a cartoonish cut-away view of the man's anatomy, revealing a second heart. That sly fox! Moments later he bursts into flames and dissolves in the sea of roiling magma.

The reluctant white hero savior in Avatar approaches the tech guy. Something has been bothering him, and he needs to know why all the aliens are blue. The tech guy takes a moment to clear away a billion holographic charts from his last lecture about Unobtainium, then launches into a scientific lecture about Pandora's atmosphere. As it turns out, there is a compound in the planet's air (Infodumpium) which messes with human eyes. The natives are not blue, the tech guy explains as a supercomputer in the center of the room projects a spinning glowy image of an eyeball surrounded by panels of text in futuristic fonts scrolling by way too quickly to read. We simply interpret the coloring of the aliens' skin differently due to Infodumpium. Their actual color is more of a teal than a proper pure blue.

Rocky wants to win the boxing fight. He moves his body so that it gets muscles. Rocky drinks eggs because it makes him stronger so he can punch the other guy. He runs while his trainer drives a car, so that he may become a car, and outwit his opponent. Rocky goes to a beef house where there's all this meat and beef and it's cold. He starts going nuts, punching all the meats. It's the scariest thing you've ever seen in your life, this guy beating the heck out of these beef bodies hanging from hooks. At first you think he's doing it because he wants to get strong, to beat the other boxing man by vanquishing larger opponents and making his fists tough. 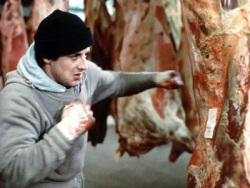 Then his trainer starts crying. The old guy's losing his shit, weeping like a baby. He runs toward Rocky, stumbling, then wraps his arms around the boxer to try to get him to stop because he's scared. "Why you doing such a thing to the beef, Rocky? What in the world is going on in here ya big lug?" Rocky tries to shrug off the trainer, but relents. His eyes contain a cold fury. They remain locked on the big old slab of meat in front of him. "Trainer," Rocky replies to his trainer, "I went to the doctors. They told me I'm... they said... I'm made of meat. I thought they was joking, but they hooked me up to a computer machine and the printout said 'meat'. I want to punch this meat until the truth goes away."

Citizen Kane has died in the movie Citizen Kane. He had been going on and on about something called Rosebud. No one knew what it was. Then, the audience sees that Rosebud was the name of his sled from childhood. All of the man's considerable accomplishments meant nothing when compared to his brief period of pure innocence. This isn't the twist, though. The camera pulls back into the sky, through the clouds, into outer space. We see the planet. We take in the shocking truth. The whole movie has been set on the moon.