In response to my Aerosmith column, a reader asserted "People want to be like The Who, The Stones and The Beatles, but no one wants to be like Aerosmith." If only this were true, the music world would be a much better place. Instead, the grossest rock groups of the past thirty years have patterned themselves after Aerosmith's broad blues-pop riffs and ugly-sex aesthetics, from the '80s hair-band poofs to modern-day slugs Buckcherry, whose latest slime trail Black Butterfly just oozed into stores. 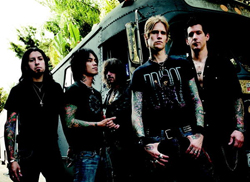 We're gonna get so laid on this tour bus, bro, like porno stars!Adam Carolla theorized that Los Angeles populates itself by having every American city contribute the most retarded 1 percent of its citizenry. Similarly, L.A. attracts the nation's worst musicians because it provides a nurturing habitat for glam-metal trash, who arrive via a sewage pipeline from hick outposts. These anachronisms, who look like the spawn of male-on-male breeding between Poison's members, entertain the moronic starfuckers on the Sunset Strip with their brainless odes to debauchery. As a result, these clowns mistakenly believe they've "made it" and gloat to the hometowns that bid them good riddance, sending postcards that read "U made fun of us, everyone loves us in L.A.," not understanding that the concepts "being deserving of mockery" and "being popular in Los Angeles" are far from mutually exclusive.

Buckcherry singer Josh Todd, a Los Angeles native, sprung from the soil of a city soggy with aerosol emissions and residual fluids from "rock star"/groupie interactions. He's the bastard son of 100 Vince Neils. Todd co-founded Buckcherry with guitarist Keith Nelson, who he met through a mutual tattoo artist, true to the degenerate tradition of shared needles. They selected "Buckcherry" by transposing the letters of Chuck Berry's name. Perhaps they admired his trailblazing musical work, or possibly they just admired his alleged urine-intensive sex tape and his expensive habit of videotaping the ladies' restrooms at his restaurants.

Somehow, Buckcherry's toxic output escaped Los Angeles, which usually serves a reliable containment zone. The group scored a hit with "Lit Up," which contains the chorus "I like the cocaine." This testimonial reinforced cocaine's status as the dickhead's drug of choice. Discussion of Buckcherry's second record Time Bomb often prompts the phrase "critics hate it, but it's a fan favorite," establishing the unfathomably low standards of Buckcherry's subhuman devotees. Buckcherry vanished after Time Bomb detonated in spectacular failure. 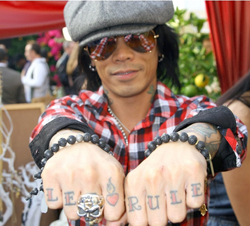 Stevie D's dumb tattoos somehow compromise his hands' ability to play decent riffs.In 2005, Buckcherry (Todd, Nelson, and three replacements, including some joker who answers to Stevie D) resumed shoving its malodorous raunch down America's throat. "Crazy Bitch" inspired lacquer-faced barflies to form skank caravans in rock clubs, while also causing exactly the kind of brain-dead couples that should be spayed, neutered and forcibly separated to draw closer due to their misguided belief that the refrain "Hey, you're a crazy bitch/but you fuck so good, I'm on top of it" works as an affectionate dedication. The question "Do you and your significant other consider Buckcherry's 'Crazy Bitch' to be 'your song'?" should be added to health-clinic paperwork, with everyone who marks "yes" required to leave their reproductive organs at the door.

"Crazy Bitch" caused friction in smart woman/dumb prick pairings, which are as depressingly common as emaciated Josh Todd lookalikes in Hollywood gutters. When the guys tried to serenade their lovers with "Crazy Bitch," the females bristled at being characterized as exceptional at sex but otherwise deranged and functionless. Conveniently, Buckcherry created "Sorry" for use after these awkward failed seductions, or date-rape "miscommunications," or the dismemberment of passengers who'd been screaming "Just let me out!" since the start of an impromptu street race, or whatever else makes Buckcherry fans feel remorseful. Few bands have as much to confess as Buckcherry, which should be forced to eliminate all traces of its existence save this song, which could be soundlessly preserved by having its redundant lyrics (including all sixteen sorries) tattooed on Todd's leathery flesh like the mark of Cain. 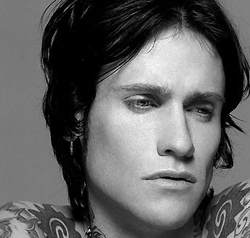 Found this chick on a Buckcherry page: Whoever she is, she must be a "Crazy Bitch!"The title of 2008's Black Butterfly continues the ostensibly macho group's obsession (from previous albums: "She flies like a butterfly/wind beneath her pretty wings," "tormented butterfly") with the queerest animal this side of the unicorn. Somehow, Buckcherry again avoids writing a song about "rock 'n' roll," usually a go-to subject for bands that are this cocky and creatively bankrupt. However, it produces more than enough horrible songs about sex and drugs to compensate for any category in which it suffers from a cliché deficiency.

Like most assholes, Buckcherry follows this routine: Disgusting misbehavior followed by insincere apologies. So after "Too Drunk...," listeners get "Talk to Me," in which Todd offers unappetizing bribes both material ("hands are in my pockets/just to buy you lockets") and physical ("kiss you right between your thighs.") Men, next time you're in trouble with your lady, be sure to dangle lockets and propose oral sex -- works every time! 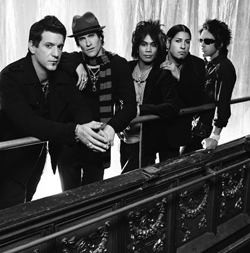 A rock band's quality is inversely proportionate to the amount of neck jewelry its male members wear."A Child Called It" resurrects Todd's tradition, which started with "Lovely Bones" from his solo album, of devaluing bestselling books by using their titles for his crappy songs. Dave Pelzer's A Child Called It chronicles how his Crazy Bitch mother stabbed him, force-fed him ammonia, rubbed his face in soiled diapers and burned him on the stove, among many other atrocities. The man has suffered enough: Does he really need an exceptionally shitty band co-opting his life story?

During Black Butterfly's final track, Todd strums acoustically while crooning "Cream on me/you will always be my deepest love." The song is called "Cream." This is not a joke. Cock-rock parodies such as Spinal Tap, The Darkness and Aldous Snow never yielded a fuck-me overture this hilariously stupid. But even if Buckcherry revealed itself to be an elaborate prank, with the irony necessarily extending to every aspect of Todd's ridiculous appearance, there's still the matter of the band's music, which dispenses more punishment more than any humor, intended or not, could ever redeem.