The Unwritten History of Halloween 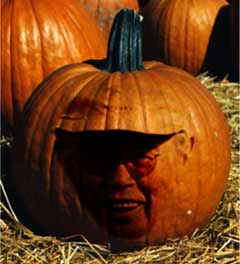 Wait, what?Halloween is almost upon us, gnawing ever closer like the hungry specter of death. This beloved annual event draws children out of the house and into the streets like common rats. They dress in a myriad of costumes, offer knocks to doors with hopes of candy as payment, and honor all that which is ghastly, ghoulish, and mysterious in nature. While most people look at it as a jovial outing and harmless celebration of the darker aspects of human imagination, some look at it as no less than an affront to all things holy and devotion to the devil. The true nature of Halloween lies somewhere in the middle, because really, why does anyone need to actually garnish their house to look like some sort of flamboyantly homosexual funeral parlor while simultaneously dressing up as some random character or caricature of the unknown? It's all kind of silly when you get down to it, and I suppose that's why it's harmless. But at the same time, can you really look into the eyes of a six-year-old dressed as a Mexican bandito and not see the work of Lucifer himself? True, I have a hard time not seeing the work of Lucifer in people dressed normally when I'm not on my various medications, but that certainly doesn't mean I'm wrong!

The history of Halloween goes back pretty far, and to be honest, I don't really know any of it because I was never allowed to celebrate it. I did see an episode of a "Ghostbusters" cartoon that explored the origins of Halloween, and I think it was explained that the annual holiday was designed to appease the millions of demonic spirits slavering with ectoplasm for a chance to haunt the holy crap out of us. Assuming "Ghostbusters" to be empirically correct, I have no choice but to accept the validity of this ridiculous holiday. I'm not going to put on a costume and go door-to-door begging for a hit of sugar, but I suppose I'd be overstepping my bounds if I shot anybody who makes the mistake of coming to my house with intent to score candy from me. I work hard for my unearned money, and there is simply no way I can justify spending even the smallest amount to feed a bunch of greedy children with candy that could otherwise go to me. You hear that kids? You'll have to pry this candy from my cold dead hands!

The killing fields.A complete ignorance on the history of Halloween might prevent a normal person from doing a historical look at the haunted holiday, but I'm far from a normal person. History, as you know, goes forwards and backwards. Right now, or rather, soon from now, the future will become the past. I need only write about the future for it to eventually become history. Once again, I'm using my patented Doppler 2 future forecasting skills to gaze into the frothy bowels of tomorrow. In honor of this wretched holiday, I will replace my standard crystal ball with a jack-o'-lantern that has the face of Uncle Benny from "Lethal Weapon 4" carved in it. I beg you to stand back, children and the elderly, for my strange and arcane powers are as unstable as a microwave jam-packed with a pirate's plunder of light bulbs and batteries!

Halloween 2003
People will decorate their houses and dwellings with benignly scary décor, such as ghastly homemade skeletons, fake tombstones and cobwebs, and the bodies of murdered coal miners who dared to take coal from the infamous haunted mine beneath Devil's Hill. On the eve of Halloween, children will hit the streets wearing strange and beguiling costumes inspired by fantasy and fiction. The children will either knock on doors or ring doorbells, a stimulus that will cause adults to salivate and joyfully distribute candy to the youngsters like altruistic vending machines. This ritual is known as "trick or treating" and its name likely has origins in professional prostitute terminology.

A group of furries gets gunned down when they try to trick or treat at a wild game hunting range. Because the victims did not consider themselves human the killers will not be charged with any crimes. Instead, they will be honored as heroes and awarded the keys to several cities, which they will then use to unlock the spinal columns of protesting furries.

Halloween 2007
The trend of young girls adulating Britney Spears by dressing to look like her will come to a screeching halt in 2007 when Halloween becomes known as the Night of a Thousand Molestations.

Halloween 2012
Halloween will be cancelled indefinitely when a Washington D.C. area man is found distributing suspicious white powder thought to be Anthrax. The holiday will be resumed the next year after the powder is discovered to just be harmless cocaine. (Submitted by Benjamin "Greasnin" Platt, who confessed to me that he wants to be a dancer.)

With economic hardship burdening the world like a back massage from a rabid badger, the Halloween of 2032 will take on a decidedly low-key demeanor. People will decorate their houses with scary obituaries clipped from newspapers and the children will trick or treat dressed in normal clothes and adorned with bruises handmade by their parents. Instead of candy, they will be told long-winded stories from the elderly that emphasize doing the right thing and standing strong through tough times. A year later, children will discover that the elderly people that give them this advice had been dead for many years. The children will be so aghast that they all kill themselves in terror. Thusly, the true meaning of Halloween will be understood and appreciated by all.

Halloween 2040
Halloween becomes the most popular holiday in America when the first openly goth president is elected. Dark President Orpheus Tearstain will win the hearts of voters by promising to suffer immensely for them. People all over the country will honor the newly elected Leader of the Damned World by dressing themselves in scars and leaving their Halloween decorations up year-round. As promised, our noble President Tearstain will suffer immensely for us all. His election inspires a group of European aristocrat vampire hunters to come to America and kill him during a political appearance. This deliciously macabre death adds increased weight to the theory that presidents elected on a year ending with zero will die in office, with the exception of Reagan, who was actually a hologram.

Halloween 2052
Senile people will mistake children in costumes as visiting robots and offer them oil and cogs. Then these people will sit down and watch their own children, dressed in robot costumes, perform menial cleaning chores until their tiny robot hands bleed.

Halloween 2064
Kids everywhere will be equipped with a new food delivery system in the form of a front mounted input port running directly to the stomach. When a child visits a house on Halloween, the homeowner will simply plug a hose into this port and pump delicious candy solution right to where it's needed most. Children will be warned to avoid suspicious houses for fear that nefarious individuals might actually pump out poison or liquefied razorblades as a sinister practical joke. This augmentation will lose popularity a couple years later when children start reversing the input port and using it to spray gastrointestinal juices at each other.

Highly compressed digital images of sugared candy will be downloaded directly into the brains of joyful trick-or-treaters, bypassing the need to even leave the house. Like all good things, this change won't last long because of those damn diabetic kids. They ruin everything.

Halloween 2103
An alien invasion in October of 2103 will overshadow Halloween to the point that nobody will even remember to celebrate it. Later, when the aliens inform us that they are not hostile and simply want to live amongst us, we will naively let them. Then we will become threatened by their wealth and power. All aliens will be successful proctologists and therefore hold the human race by the seat of its pants.

I hope I didn't terrify you folks too much with my diabolical dissection of forthcoming time. Although Halloween is still over a week away, you can get the jump on everyone else by polishing your costume and exercising your body's tolerance to massive amounts of candy. This is also an appropriate time to carve jack-o'-lanterns. I'm trying to promote "Lethal Weapon 4" as the official theme of Halloween 2003, so be sure that your pumpkins and other decorations accurately portray the situations and characters that made that movie so damn good. I've already ornamented my lawn with exploding barrels and plenty of hair-raising scenarios to make Danny Glover reflect on his old age. Good luck trick or treating this year, and I hope none of you get poisoned or even think about trying to get candy from me.

Hey everybody, this is Ben "Greco-Roman" Platt and I've got the cure to all of your mid-week blues - a movie review! This time around I took a look at "Laser Mission," starring Brendan Lee and Ernest Borgnine. Sounds like an instant classic, doesn't it? But much to my shock and chagrin, it actually wasn't very good at all!

Action! Excitement! Sense! These are three things that are conspicuously absent from "Laser Mission." Most of the movies that come across my desk these days are no-budget horror flicks made by three fat, sweaty guys with a borrowed digital camera, so it's a nice change of pace to see a movie like this one. It restores my faith that action movies with reasonable budgets starring relatively respectable actors can suck just as hard as anything else. "Laser Mission" tries to capitalize on nuclear paranoia toward the end of the Cold War, but it runs into a few small problems, such as massive logical holes, dialogue that would make Aston Kutcher blush, and actors who seem to be largely unaware of what country their characters are supposed to be from. But on the upside, the movie does feature a repetitive song about mercenaries which it plays over and over again, so things can't be that bad! Oh wait, yes they can. In fact, things can be precisely that bad.

Read the review and then maybe the cool kids will finally accept you! Probably not, but hey, it couldn't hurt.