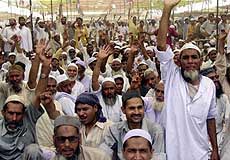 Another satisfied crowd, in the process of getting their faces ROCKED until they can't face any more! If you're reading this, chances are you either enjoy Something Awful or have horribly misspelled AmishNews.com yet again. If you fall into the former category, I have a tidbit that will make you more excited than Mike Tyson at an all-you-can-eat ear buffet (shut up, this stuff is hard to come up with): Something Awful is coming soon to a town near you in the Monsters Of Humor tour! If you fall into the latter category, brother Malcolm accidentally constructed a barn around his house and needs your help taking it down this weekend. Lemonade will be served, and as usual one virgin will besacrificed in the name of the Dark Lord.

The concept for our tour originated where most -if not all- great ideas do: the Fark forums. It was there that Drew Curtis' Farkapalooza was born, a tour that wound up grossing well over one million dollars, which roughly equals one penny for every tired cliche that a Fark forum member has ever clumsily photoshopped. This financial success was quite an extraordinary accomplishment when you consider that the Farkapalooza experience was minimalistic in nature, quite literally a crowd of people shouting about shows they thought other people should go to. Being the sort of site that never passes up a quick buck or a donut dropped on a slightly dirty floor, we decided to expand on the concept and create a tour that would capture the true spirit of Something Awful without resorting to the use of an ectoplasm pack.

What can you expect to see at the Monsters Of Humor tour? For one, there will be all the front page updates you've come to love from Something Awful, but read live at 2,000 decibals of pure hilarity! Imagine the intimacy of hearing every word read aloud in the nasal, cracking voice of the twenty-something nerd who wrote it. It'll be like paying for us to make sweet love to your ears, but for legal reasons I have to state that no penis-in-ear intercourse will actually take place. Unless, that is, you're one of the lucky few picked to come backstage. To give you a better indication of a typical Monsters Of Humor show experience, let's take a closer look at the performance schedule:

Introduction - 2pm on Stage A
Amidst dazzling pyrotechnics and the energetic sounds of Queen's "We Will Rock You", the stage's curtains are thrown back and a senile black man in a wheelchair slowly rolls from one end of the stage to the other. The song plays three more times as the confused audience waits, then a single firework is shot into the air as the curtains close.

Dennis "Corin Tucker's Stalker" Farrell - 5pm on Stage A
I'm a very sensitive guy, a fact that anyone whohas licked my clitoris will attest to. My show is designed to reflect that sensitivity. Since I only havetwo updates under my belt, a majority of my performance is spent readingselectedpassagesfromConantheBarbariannovels while openly weeping. I may or may not be wearing my favorite blue shirt.It all depends on my mood and the laundry situation.

Reid "Frolixo" Paskiewicz and Ben "Greasnin" Platt - 6pm on Stage B
Surprising everyone, the duo emerge from behind the curtains already locked in mortal combat. Though the two have supposedly long since settled their differences, this is clearly no longer the case. The girlish grappling turns into awkward groping, however, and the two soon discover love in a place they'd never have expected to find it: under the couch cushion. There's like three dollars in change in there too, and Frolixo's favorite pen. The two are then wed onstage by our very own lawyer / pastor / popcorn vendor Leonard J. Crabs. They hop on Frolixo's twin engine Cessna destined for a honeymoon resort in Hawaii, and are tragically killed when their airplane crashes after attempting to exit Earth's atmosphere as part of a poorly planned shortcut.

Lowtax rocking the mic during a sound test.

Rich "Lowtax" Kyanka - 7pm on Stage A
Waving off rabid applause, Lowtax scratches the back of his head and looks down at his feet dejectedly, muttering that he has a confession to make. As it turns out, every article he's written for Something Awful has been lifted word-for-word from the works of 14th century author Geoffrey Chaucer, except for the beloved tales of his cat (obviously). These were penned by Ray Bradbury. Lowtax then shocks the crowd by announcing the demise of Something Awful, and the birth of his new project: the new wave cover band Jimmy Hoffa And The Teamsters. Josh "Livestock" Boruff (clad in an orange jumpsuit and Ray Bans) takes to the stage with a Casio drum machine as a stagehand passes Lowtax his guitar-style keyboard. The two launch into a rousing rendition of "She Blinded Me WithScience", which Lowtax then admits was also written by Chaucer before runningoffstage and into the sunset.

But that's not all! In addition to our writers' performances on stages A and B, various extreme sports athletes will be on hand to punctuate each laugh with a suicidal stunt! Wowzers, dudes! When's the last time you've heard the front page being read out loud while a motocross biker was set on fire and shot out of a cannon in the background? Never, unless you're my imaginary girlfriend! And if you are her, I locked you in the basement, so you shouldn't even be reading this. Women! Can't live with them, can't let them escape once you've lured them into your home with false promises of expensive shoes and the Lifetime channel.

The entire show will be an experience like no other, and when it eventually comes time to go home you'll understand how much it has changed you. Oh, not at first. You'll pull up to your driveway and head to the kitchen as you have a thousand times before, pouring yourself a glass of orange juice. Then a loved one will ask how the show was, and you'll replay the entire day in your mind. As a grim realization settles in, you will absently crush the glass in your hand and solemnly lower your head. Your loved one will take a worried step backward, quietly repeating your name as though it were a question while reaching behind them for something, anything, to defend themselves with. The blood will patter from your palm and mix with the orange juice on the counter, creating an oddly beautiful juxtaposition that you'll stare straight through, grinning as you see the future beyond it. After all these years, your life will finally have a purpose, grisly as it may be:

State Og: It's Not Just For Breakfast Anymore!

A weekend update by State Og is like a savage beating from the guy who hangs out next to my local comic book store: you just come to rely on it.

How many miles does our new organic car get per gallon of gasoline? Gasoline? What’s gasoline? With our new OGanic Car, you’ll never be forced to buy a drop of any petroleum product again. The OGanic Car runs not on gas but food, and it defines food as anything slower than itself. Just let it roam freely at night and not only will you wake to a car with a full tank, but aneighborhood free of the weak and infirm!

If that's not text being displayed on your monitor via the internet, I don't know what is! Head on over and read State Og!