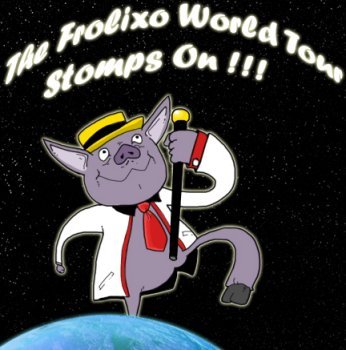 Hello my friends, it has been a long time since we “rapped”. Too long. Since I know most of you have the collective memory of a goldfish, last month I tried to poison a whale and ran afoul of the local constabulary. Since then the tour was put on hiatus and instead I worked on my defense with the court-appointed sock puppet. With my puppet skills, I was able to make a plea bargain and reduce the charge to aggravated loitering. This means that I am able to resume the tour with the vigor one expects from being repeatedly beaten and sodomized with broom handles for three weeks.

During my time in incarceration, I’ve had a lot of time to ponder the future of this goodwill Internet tour, and what needs to be done in order to make this thing a success. So far it has been a waste of the forum members’ money with my extravagant shopping purchases and spending the evenings at the cinema. For this, I am sorry and I promise to make amends.

Therefore, I have drawn up a vast and sweeping reform with the help of my cell mate, Paco the killer, that calls for numerous social welfare programs that will help this great nation and bolster the integrity of Internet comedy. We are hoping that this will put some wind in the sails of the stalled tour that has thus far only traveled 2.4 miles and saved zero souls in the first three months. I have a dream my friends, and it may or may not include a chocolate waterfall. 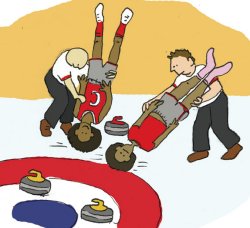 This picture is racist, but it was the only one I could find with curling and black people.

Nighttime Curling: If left to their own devices, inner-city children are horrible monsters who can only be destroyed via flamethrower. That’s why this program is so important to the safety and health of city residents and firefighters around America. Curling is the #1 sport in Canada, besides hockey and drinking, and uses many important muscles around the calves and knees. It also has the added benefit of teaching the fundamentals of broom sweeping, something most of these children will be doing for the rest of their lives. Because of the lack of ice rinks, we will be using a buttered blacktop and frozen turkeys.

Riddln’ Kidz: This program is designed to help children afflicted with the terrible disease of ADD cope and understand their medication changes with the help of wordplay. Some children love to run around, play, and use their imagination. This is unacceptable if they are to fit into a society where 90% of your time will be working in a professional environment that frowns on imagination or festive colors. We need to get all these children on Ritalin now before it is too late and they gain free will. After that you might as well ship them to Europe.

Baby-B-Gone: Who doesn’t love abortions? With these new clinics, single mothers who lack insurance and income can get cheap and fast abortions without all that messy legal paperwork. Punch cards will be handed out, and for every five abortions you get a coupon for a free Cinnabon at your local mall. 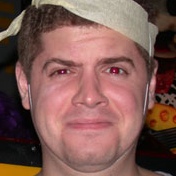 This is what it sounds like when a heart breaks.

Adopt a Webmaster: While these poor individuals enjoy limited amounts of fame and a windfall of profit from pop-up ads, they tend to be outcasts from society, crippled with indigestion and malfunctioning sweat glands. What Adopt a Webmaster is set out to accomplish is to provide a big brother or system administrator to take them out to ball games, climb trees, and optimize their server transport buffers. This would be a volunteer position, but perks like free hats or Total Fark accounts are a distinct possibility.

Farts for Hearts: This is a pledge drive that raises money to battle heart disease by farting. Once you pledge to donate, a dollar is to be given for every gas pocket emitted from the buttocks. Not only that, but farting will help keep everybody in a good mood because it is hilarious. 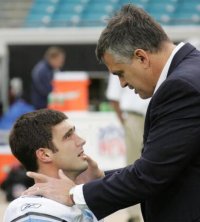 "You broke my heart Fredo."

The Lions Club: This is a foundation that will give money to the Detroit Lions football organization to hire an offensive line so whoever the QB is can have enough time to drop back with the ball once it’s snapped. Another function of this program is to raise enough money to buy it from the Ford’s, who stubbornly refuse to fire Matt Millen even though he has the worst record of any NFL general manager.

They are also losing huge shares of the car market to the Japanese hybrid technology, and are trying to cater to our sense of patriotism with meatball Toby Keith to push their sub-par products. Guess what, I don’t want an SUV hybrid . Wow, I bought an expensive SUV that only uses just as much gas as a normal car! Here’s an idea, make a regular hybrid car that uses even less gas and saves people even more money! I know it is revolutionary, but I can’t take credit for it. Toyota and Honda figured it out and now they are dominating the car industry. Guess what Ford and GM, it’s WW3 and the Japs just sank your battleship, nigga!

Now that I have outlined some realistic goals to shoot for, I have developed a set schedule for next month, and plan to stick to it, no matter how lazy I feel. I’ll even take a camera with me this time as proof that your money isn’t being funneled into a high-risk stock fund so that when I retire I can buy a pony and brush its mane all day.

With these new measures I think the USA 2006 World Tour is back on track and boring a tunnel straight into your fatty heart. Some of you may think that we here at SA don’t take our comedy seriously, but let me tell you, we are dedicated to making our mark on this world, whether it be all the citizens holding hands in peace, or the black scorch mark of a nuclear holocaust. God bless this mess.