Last week, the progressive state of Utah's drive to punish any owner of two X chromosomes went down in flames when the outside world caught wind of their attempt to criminalize all miscarriages. But those wacky legislators haven't given up yet! We've been provided with exclusive access to their latest efforts at making residency in Utah even more of an unmitigated Hell than it was before. 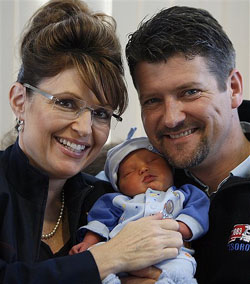 Think of all the magic and wonder Trig Palin would have missed out on if he'd been aborted. Think of all the good times he wouldn't have living in that state-run institution from the age of 18 until the end of his natural life.Dear Governor Herbert,

It is with deep regret that we at The Utah Fetus Advisory Board write to you today. To be completely honest, we nearly washed our hands of you back in 2009 when your office refused to entertain our idea of changing the word "fetus" to "Future Mormon" in all science and medical textbooks sold in the great state of Utah. However, we realize that, rarely, miscarriages are often not the fault of some current or Original Sin; a pregnant woman could be standing downwind of a rock concert or perhaps a gathering where people are playing cards or dancing, causing her fetus to decide that life in the arms of Our Lord is preferable to 80 years of Hell on Earth. This is why some of our brightest scholars (including two men with PhDs in Bible Awareness) have assembled the following suggested amendments to the revised anti-abortion bill we sincerely hope you sign soon. After all, If you don't protect the unborn children of Utah, who will?

Amendments Hereby Proposed by the Utah Fetus Advisory Board

Also, in lieu of our previous goals of making any miscarriage illegal, we suggest that you prohibit the following activities for those carrying Future Mormons.

Again, we would like to stress that these proposed amendments are in the best interests of Utah's most valuable resource, our unborn children.

P.S. We urge you once again to reconsider keeping Utah's school lunch program. Those hungry little bastards are milking us taxpayers dry!

The Utah Fetus Advisory Board

– The Utah Fetus Advisory Board