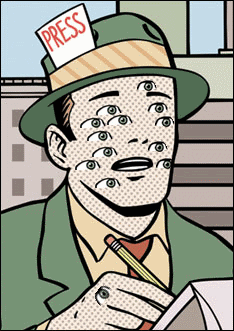 Your intrepid reporter - now with geniune credentials!Once again we find ourselves at that most special time of the year, when promising young mutants from across the galaxy load up into interstellar shuttles and amaze us all by doing the impossible.

Then, after making the hours-long journey to Bonkulus Prime without headbutting an observational window port or eating the pilot, it's time for them to show off their athletic abilities in the annual Mutant League scouting combine.

Hi folks, Bhutt Prefarte here. If you'd like to know which mutants made the biggest splash (or squish, in some cases) with the Mutant League scouts, you've come to the right place.

I was fortunate enough to be in the stands of Kerpflazzel Hockspit Staditorium during every minute of this year's combine and escape without serious injury or memory loss. My sixteen and a half good eyes were on the lookout for the most impressive mutants on the field, the names that everyone will be talking about later this year around water coolers and water defrosters and small puddles with cups laid neatly around the edges.

I even took notes!

It's time to dish up the straight scoop on the mutants that I found to be the most promising, in no particular order.

This agile brute ran the fastest 40 yard dash on record with a stunning time of ten minutes and eight seconds! Horncob only veered off course to decapitate seven officials, and stopped to tear the arms off of just one leech vendor.

I haven't seen such speed and determination since Razzle Frazzleclot pleasured himself to death in the 51.0032 championship.

This mutant has been a media darling for months, and now that I've seen him in person I understand why.

He is using his vestigal limbs to hold members of the media tightly against his lumpy, glistening abdomen and adjusting his mind-controlling secretions to force them to write positive things about him. Their bodies have been partially absorbed by all too thin webs of flesh that resemble stretched gum.

Their defeated moans haunt me long after the fact. No amount of liqour can drown out their echoes.

Areola really displayed an amazing amount of strength during the bench press drill. He flattened those benches with such power and precision that you'd swear the end result was a paper printout of the cross section of a bench.

He lost some style points when he asked the people sitting on the benches to move before he began, but like a true professional, he made up for it by giving them directions to "another bench" which was actually the inside of an active volcano in the parking lot.

If you're anything like me, the standing longjump is your favorite drill in the combine. Year after year, a young mutant seemingly comes out of nowhere to amaze onlookers in this unique event, and Knocknerve certainly kept that tradition going.

The lanky Luftballoonian squatted at the white line, tensed up, began bleeding from his tendrils, and exploded in a clap of blue flame and canteen-like organs which sloshed around for several minutes, propelled by the streams of radioactive bile ejecting from their deflating forms.

The league is still scrambling to address the issue of whether or not a ghost can be drafted, but Knocknerve's smug phantasm has yet to stop hovering, so he is technically still setting the long jump record.

Was deemed physically unfit to participate.

While his muscled, hulking frame was certainly too large to fit in the stadium, Pummel did show tremendous passing skills when - in the third hour of his tantrum - he picked up the official that refused to allow him to compete and threw the man into the open window of an emergency room over three miles away.

There you have it - my picks for the mutants you'll want to keep an eye on. If the depth of talent on display at this year's combine was any indication, this should be the most thrilling season of the Mutant League Spelling Bee yet!