Nine out of 10 Vampires Prefer AC Over DC 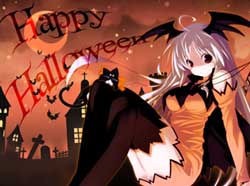 Mmmm, Halloween and anime. A perfect combination.If you're like me you spend Halloween huddled in your studio apartment hoping to Christ that no one rings the doorbell and, God forbid, try to interact with you in some way. Luckily my apartment complex is occupied by nobody but divorced single men whose bawling cries soothe me to sleep each night and cat ladies whose stench from their many litter boxes that haven't been cleaned since 1980 waft over the community to give it that utterly depressing no-way-out-but-suicide smell.

Even if I didn't live at the Last Resort View Apartment Homes, residents of California have become so untrusting of one another that I don't think anybody even trick-or-treats anymore, at least not before mapping out the "bad houses" they found on the Megan's Law web site.

WHAT WAS THAT?! "Trick-or-treat"?! GET THE HELL OUT OF HERE! I am heavily armed and writing a front page update! Trespassers will be shot! Just because all the lights in my apartment are on and there's a pumpkin at the doorstep and fake spider webs on my door doesn't give you the right to bother me in my home!

There, that ought to keep the little bastards from coming back. You know, it wasn't always this way. I used to be so into Halloween. My father and I would turn the garage into a spookhouse that would delight the whole neighborhood. That all changed when my dad was thrown in prison for Digg fraud and I moved out to California.

Besides doing my best to avoid humanity, I use Halloween as an opportunity to chase the vampires out of my electrical outlets. For years I have been slaying these vile beasts that steal my electricity and cause my utility bill to skyrocket. Electric vampires lie in wait every October to eat your electricity. Ever wonder why your utility bill jumps every Halloween? Now you know.

I have told everybody I know about these wretched fiends but they won't believe me. My friends have stopped talking to me. My parents have disowned me. My girlfriend left me out of sheer disgust. For years I have been alone in my quest to eradicate the electric vampires from the world, but I am just one man. But today I am finally vindicated, thanks to CNN and a slow news day.

A force as insidious as Dracula is quietly sucking a nickel of every dollar's worth of the electricity that seeps from your home's outlets. 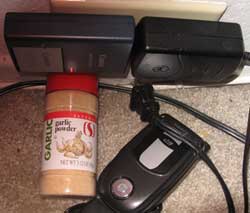 With a few precautions you too can have a happy and vampire-free home.There is it! It's on the Internet so it must be true! Dracula was never coming. He is already here, stealing your electricity and talking shit behind your back while he does it! Take that, doubters!

Insert the little fangs of your cell phone charger in the outlet and leave it there, phone attached: That's "vampire" electronics.

Allow your computer to hide in the cloak of darkness known as "standby mode" rather than shutting it off: That's vampire electronics.

The latest estimates show 5 percent of electricity used in the United States goes to standby power, a phenomenon energy efficiency experts find all the more terrifying as energy prices rise and the planet warms. That amounts to about $4 billion a year.

Unfortunately the media gets the story wrong once again. CNN has been taken in by the vampire conspiracy, a plot to blame their evil doings on our cell phone chargers and the standby modes on our DVD players. There is nothing wrong with our brand name consumer electronics.

Do you really think the red LEDs on our chargers and stereo systems that helpfully tell us when our devices are off so we know for sure are actually drawing $4 billion in power a year? It's just another one of the many lies the media is feeding us about the war on terror and vampires.