Finally, an alternative to Christmas.

The Season of Crushing Depression is Upon Us! 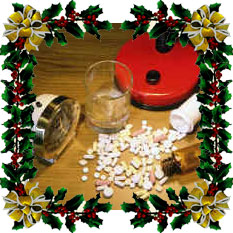 HO HO HO! MERRRRRRY CHRISTMAS!With Thanksgiving behind us, it's time to really settle into that lovely bone-chilling cold of winter, and all of the familial problems that are associated with the holidays. Sweet December is the month of sorrow for me, and I suspect many others. You've got the super fun Christmas gift giving and the financial burden it places on you, you've got having to jam your bloated carcass into hour long lines to buy a stuffed animal for a cousin you've never seen, you've got chirping saccharine songs blaring at you over and over again from every mechanical orifice that can produce sounds. Worst of all, you have to spend time with your family, and not just your immediate family, your extended family too.

I know some people would disagree with me, would tell me that Christmas is the season of giving and sharing. They would call me a Grinch and fire rock salt at me when I try to burn down their houses, but these people are fools. Christmas is an annoying religious holiday that has been hijacked by capitalism and turned into some nightmarish hell world of endless commercial hand jobs. Oh hooray, look at what bleeping glowing monstrosity Japan has vomited into our border this Holiday Season! I'm glad everyone I know under the age of 16 absolutely must have it!

On top of all that, terrorism and a stagnant economy are joining forces to bring incredible social pressures down on every American. BUY NOW OR IT'S THE GREAT DEPRESSION. DO YOUR PART FOR AMERICA YOU LOWLIFE! I'm sure I'll succumb, I'm sure I'll be waiting in line for "Lord of the Rings Frodo Underwear" and "Screeching Monkey Platform Jumper" for the Nintendo Gamecube. That way I can wrap it up and mail it off to a great nephew that looks like his head got run over by a truck and his father can force him to write me a nine word thank you note under threat of grounding. 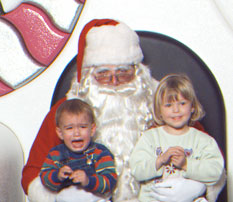 Kids especially love the Holidays!Then there are Christmas cards. I somehow resist the pull of these idiotic bitches. I don't want to talk to the guy from college who tried to pour water under my locked door, much less send him a card wishing him a happy holiday. Then I'd get a card back from his incredibly gorgeous wife with a picture of the two of them on the cover and him winking back at me reminding me that he's sleeping with her and not me, even though I was the one she made out with at that party. No, I'm not bitter, I love the holidays!

Christmas cards are a fucking trap, an addiction of loneliness worse than drugs. You send out ten and you are committed to sending out those ten cards every year until you finally put the gun in your mouth and work up the courage to pull the trigger. I'd like to send out a card of that. Me, with a gun in my mouth and my eyes clenched, with the caption "MERRY CHRISTMAS" in big red letters that are dripping blood. Like the "Fatality!" letters in Mortal Kombat. Maybe I could even hook up a musical card that would play some depressing Doors song like "The End".

No one would thank me except for my great nephew, forced to write a nine word thank you note under threat of grounding.

I'm done with Christmas! My family gets Thanksgiving and that's it, from now on December 25th is my new holiday "GET THE FUCK OUT OF MY APARTMENTMAS". You're welcome to celebrate it with me. Here, let me explain it in a little more detail so you can celebrate it yourself.

Get the Fuck Out of My Apartmentmas

Practicing Countries: Anyone across the globe can celebrate it.

Historic Roots: I got sick of fucking Christmas so I said to hell with it and replaced it on my calendar with this holiday. You can too if you want, I don't care, I'll be celebrating it by myself. 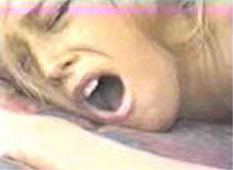 Jenna Jameson is like Santa for Apartmentmas, only the fake Jamesons hang out on the corner of Montgomery Street instead of at the mall.Observances: On Apartmentmas Eve I'll rent several pornographic movies and masturbate to them while I listen to Slayer loud enough for my neighbors to call the police. I don't like Slayer, but my neighbors like them even less than I do and if Jenna Jameson yelling for Peter North to do something to her ass doesn't drown out Jingle Bells, I know Slayer will. After I'm spent I'll start drinking cheap beer, probably listening to really loud opera music while I turn a chair to face the wall and contemplate how much I hate the world. Once the beer takes hold I'll move on to stiffer drinks and probably break some stuff in my apartment. Nothing specific, but it needs to be worth enough for me to cry when I find it the next morning. Then I pass out in a pool of my own vomit.

I'll wake up at the crack of 2PM the next morning and throw a towel over the drying shell of vomit on the carpet. Too hung over to strip naked I'll shower fully clothed, squirting half a bottle of shampoo onto the reeking stains on the front of my shirt. I almost forgot, I need to be sure to set my answering machine or voice mail message to say something like "I'm out of town for the holidays to spend time with my girlfriend's family", that way people will think I am cool and have sex with things besides myself and furniture. After my refreshing shower I'll put a bathrobe on over my clothes and put on sandals and go to the grocery store and buy a frozen pizza and steak knife. If I managed to drink all my whiskey the night before I'll pick up another bottle of that and some egg nog. When I get home I'll pour the whiskey into a lemonade pitcher along with a few shots of eggnog and begin drinking while the pizza cooks.