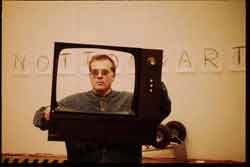 It takes a lot more than this to make a good TV show.In my last article that nobody read, I started talking about TV shows and their overall lack of originality and quality. To be more specific, I talked about creating original shows that take the shows currently on TV out on late night dates and brings them home long past curfew. Most TV shows lack the Rohypnol edge needed to challenge audiences into watching things they would otherwise never consider. Instead, the all-powerful TV Illuminati regurgitates the same premise over and over again to such extremes that if TV were a lady, she would give fatal blowjobs and probably also be cross-eyed and therefore a terrorist. As I drunkenly promised last week, I now will talk about coming up with the perfect characters and plots necessary to make the most devastatingly awesome show guaranteed to never see the light of day.

We'll start by going over characters. If you notice, a lot of shows tend to feature people – or actors – playing "roles." To help you better understand how these ideas came into existence, I need to give you a bit of a history lesson. Unfortunately, the times I spent taking history classes also coincided with the times I spent in a maddening PCP-induced rage. I'm a bit cloudy on the dates, so I'll leave those out and just go with the raw facts. Centuries ago, when Jesus traveled the land of the lost on the back of a brontosaurus solving crimes and resolving family feuds, he met a man named William Shakespeare. The duo embarked on an amazing journey by collaborating on a series of pulp crime stories. The two men theorized that by using imaginary persons reacting realistically to imaginary circumstances, they could draw readers in, creating an escape from the limited confines of reality. A few years after they came up with this idea and received the patents, they went their separate ways. Jesus went on to invent the xylophone and Theremin for the KGB. He was later killed when his plane was shot down over the Sea of Japan. William Shakespeare killed himself shortly after drafting the screenplay to "Commando," starring Arnold Schwarzenegger. Regardless of their unfortunate fates, the contributions of these two men survive even today.

The bad news is that we honor them by creating predictable characters with predictable traits. While most of these traits borrow from real life, real life is boring. In fact there is a show about real life, and it's called the news. There is more death, violence, corruption, and children trapped in wells on the news than any other show on the airwaves. Unless you count "Smash TV," but I don't think that's an actual show. This is pretty much a breakdown of every character on TV:

Honest Guy with Heart of Gold

Rookie Who Makes Each Case Personal

Veteran Who's Seen too Many Good People Die

As you can clearly see, characters are becoming all too bland. We have no choice but to move on or risk letting this endless rut continue forever. Many nations, such as Japan, have already advanced well beyond us when it comes to forging unique characters with interesting personality traits. While I can't say they've done anything in this department that doesn't scare the holy fuck out of me, they've at least done something. To rectify this dilemma (the TV problem, not Japan's vast array of scariness), I propose a new generation of cliché characters to propagate the airwaves.

Woman Carrying the Child of Satan in Her Womb

Grizzled Astronaut Who Blames Space for His Ruined Family and Alcoholism 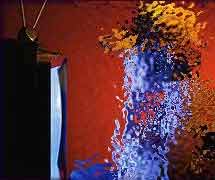 You want to be careful how you treat your audience. For example, you don't want them to feel like they've been run through Photoshop's ocean ripple filter.I want these new character archetypes to be used ad nauseam in every damn show coming out. I don't care what the subject of the show is; I just think that if you use any of these characters in any way, you've already broken the mold in defeated convention in a fight to the death. I do know that a few of my suggestions have seen some use already, both in shitty day time TV and also in canceled shows either on the WB, UPN, or the FOX network. I can't remember, since they all suck. The next step is to come up with original plots. There are scientists and writers who will tell you every plot imaginable has been utilized before. In some cases, at least a million bajillion times. I won't argue with them, because they're right. Almost every movie, book, and TV show you see are based on formulas invented thousands of years ago in clandestine Illuminati book club meetings. The trick to getting around this is by making your plots so unnecessarily convoluted that no one can possibly follow them. A few people might be brave enough to point this out, but the rest of humanity will be so lost that they will have no choice but to declare you a genius out of fear that their primitive minds simply cannot grasp the awesome scope of your vision. What a bunch of suckers. Despite the fact everything is working against me like a well-oiled machine, I think I've got a few crazy ideas dangerous enough to work, and here they are:

Adventures in Time Travel: This exciting series deals with a grandson on a collision course through time to kill his evil grandfather, a man responsible for killing millions. Or so he thinks. The only way the grandson can bring a weapon back through time with him is to become a weapon, and he does, by having his penis turned into a bomb. What he doesn't know about his grandfather is that he is an expert bomb diffuser who knows all the tricks of the trade. When the two finally meet, they duke it out until the grandson finally unleashes his weapon. Before he can detonate the bomb, the grandfather knocks him unconscious with a small, wieldable penguin and prepares to defuse him. Unfortunately, in a tense moment of doubt, he cuts the red vas deferens instead of the blue, and the penile explosive goes off. Thanks to the grandfather clause everything works out in the end. This show is called "Timebomb: The Series."
Starring: Time Traveling Black Guy, Woman Carrying the Child of Satan, and Grizzled Astronaut.

Stomach Churning Emotional Drama: I can conquer hearts and minds just as well, and this show proves that. My foray into drama, entitled "The Rig", deals with the complicated lives of everyday people trying to make it in this topsy-turvy world of multinational intrigue and global interdependency. The show takes place on an oilrig far off shore where a mysterious murder has taken place. Because oil is important, the government moves an entire police force and court of law to the oilrig to solve and resolve the crime. Ultimately this makes the complicated lives of the oilrig's crew more complicated, not just because of the intra-oilrig tension, but also because of all the interlopers with questionable intentions. When one of their own is put on trial for murder, the remaining oilrig crew must choose between justice and friendship. Thankfully things are put at ease when guest star Zeus offers up alternative solutions that may just save the day for everybody.
Starring: Man Cursed With Constant Jury Duty, Legaltron 2073i-T, Angry Viking Raider, Sentient Falafel with a Dark Secret, and Sports Team Mascot.

Science Fiction Romancerama: This exciting series set in an alternate reality where the island kingdom of Tonga won World War II deals with a forbidden love at odds with the harshness of a global Tongan police state. The hero of this story must choose between the inappropriately cast woman he loves most, or sacrificing his heart to become a hero to the oppressed masses. Eventually Imperialist Tonga has no choice but to confront this man, and in doing so they set ablaze a fire in his heart that cannot be extinguished until freedom belongs to everybody. But things get turned upside-down when our hero learns he may have fathered a child while fighting in the war – a child now grown up and serving as the King of Tonga! Also the child is half-bat and can fly. All of this set against a backdrop of impending global catastrophe – the Earth's natural resources are nearly depleted and the only hope lies in evolving gills and returning to the ocean. I call this show "Danger Island."
Starring: Talk Show Host, Hard-Boiled Career Counselor, Vindictive Millionaire Incognito, and Paraplegic Female Archeologist.

Well, there you have it, the next generation of TV! It's not so hard to come up with an original show, in fact there is no arcane magic to at all. Really, there isn't any creativity necessary either. You just have to ask yourself, "Is this something I would see on TV?" If the answer is yes, you do something akin to the exact opposite, only you make sure that it's still off from the exact opposite. They'll be expecting the exact opposite, so you be sneaky if you want to surprise them. But once they see your show, with great plots and original characters struggling to overcome their own internal and external conflictions, they'll be hooked. And if they don't get hooked outright, remember the power of Stockholm Syndrome. It's done wonders for my love life, and in theory can do the same for just about anything. Hold them captive long enough, and eventually they'll sympathize and even relate. That's when you make your millions!

Fisted By The Northstar

Our very own Jedidiah "Jed" Kirchner (we didn't know we owned him, but he's been in our basement writing comedy for awhile) has put together the necessary letters and words to form a new Rom Pit Review. He put his formidable skills to the test by stepping into the roles of the Northstar's fists, previously played by those adorable Olsen Twins. Read the exciting "Fist of the Northstar" review now!

This game is based on an anime which is evidently about walking forward and making millions of identical people explode. If there's one thing we can learn from Fist of the North Star, it's that even the best anime idea in the world won't necessarily translate into a good video game, especially if the game exists in the 1980's where there's 9 in 10 chance of it being an incoherent crapfest made by a Japanese company that's employees are too busy taking over major U.S. corporations to worry about whether or not their pixels resemble any lifeforms or objects that have ever existed in the known universe.