Dialog From The Worst Episode of The Walking Dead

Snarky forum posters would have you believe that The Walking Dead is a wholly joyless, irredeemable series. It's not. That would be Fear The Walking Dead. The Walking Dead is more of a peaks-and-valleys experience, with peculiarly barren valleys that endlessly circle the same ground. The following lines can be found in just about any filler episode. They aren't attributed to particular characters because when the show is at its worst every character is basically the same.

"This was us. Now it's me. And you're it, all of it. (Pointing at the ground passionately) That's what this is all about!" 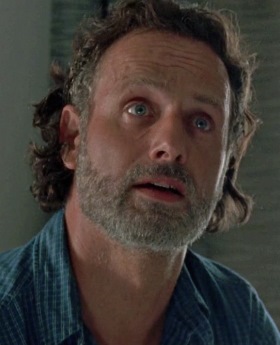 "No! We can't kill these people! What will we become? If we do it what are we holding on to?"

(The same character, ten minutes later) "Get out of my way! Let me kill these people! You don't understand what has to be done! We have to kill to survive! Think about it!"

"No! Don't abandon the plan and go out there! Fine, but I'm coming with you."

"After all we've been through, this place could be home. We just have to trust these new people. Like the before. That's what humanity is. That's what we're fighting for."

(Obviously thinking about something they need to talk about) "I ain't talkin'. There's nothing to talk about."

"We've been in here too long. We're too soft. We need to get out there and face the walkers. That's what reality is now."

"We need to talk. Before, it was out there and we all were. That... (shaking) that was what it was. Sometimes it was so much I felt like I'd fall apart. Like it was all that there was. But now I know that what we are.... what we all are, is what's fighting for. And I'll go in there again and it won't change that it happened. It will always be with us and it's happening all around us, and in here (points to heart) in all of heres (points to everyone's hearts)"

(In the woods killing zombies by himself/herself, crying because the act is really about a sad thing they can't process) "RRRRRAAAH!"